Elbows In, Knees Together, Back Straight (photo by Anna-Claire Bevan)

I used to think you needed water, waves and a wetsuit to surf. I was wrong. When I first arrived in Nicaragua, I’d never heard of volcano boarding and thought it would be enough of a feat to scale a volcano, let alone hurtle down one on a wooden plank.

Created by an Australian just over five years ago, volcano boarding (or surfing) is one of Central America’s newest extreme sports and promises an exhilarating ride to all who are brave enough to try it.

My Everest was to be Cerro Negro (Black Hill) in western Nicaragua. Born in 1850, it’s the region’s youngest volcano and one of its most active—having last erupted in 1999, causing ash damage to the colonial city of León, 25 kilometers away. Due to its youth and constant volcanic activity, it is impossible for vegetation to grow, which means, coupled with the 41-degree gradient, it’s perfect terrain for volcano boarding.

Having arrived at its base, there was little opportunity to rebuff the rather ominous looking 2,300-foot volcano. Suddenly, I was exchanging my belongings for a jumpsuit and goggles—the likes of which I hadn’t seen since my high school days. This really was to be a science experiment: a test of gravity vs. stupidity.

Complete with a somewhat splintery-looking wooden sleigh, I trekked up to the top of the black mountain, clambering over rocks and solidified lava for 45 minutes until I reached the summit.

If you look at any map of Nicaragua you will see that volcanoes litter the landscape, forming an impressive chain that runs like a dot-to-dot from the north to the south of the country; and at the top of Cerro Negro the puzzle comes alive. You can feel the heat of the lava and actually see it smoking in different places.

Having scaled the volcano, I changed into what appeared to be the uniform of an inmate at Guantanamo Bay and took to my board, attempting to mimic the sitting position I’d just been shown—elbows in, knees together, back straight. Prepare to bruise, I thought, as I began plotting my escape route down the 500-meter slope… to the left of that pile of sand, to the right of that one.

No sooner had I flung my wooden slat down on the peak and climbed aboard, I felt someone push me. I was away, soaring down Cerro Negro at breakneck speed—igniting a mist of black sand as I went.

It was amazing, it was terrifying, it was … crash! Gritty, volcanic ash flew up my nose. It was in my ears and somehow even down my jumpsuit. In my rookie attempt to slow down I unbalanced my board and projected myself into the air and then, painfully, back down, colliding with the rocks. It hurt, but I was still smiling.

I quickly remounted and came to the conclusion that since my previous braking maneuver had failed me, I should avoid trying to reduce my speed. In essence, I should stop trying to stop. So I pushed off from the ground beneath me—elbows in, knees together, back straight—and watched a haze of black sand and green scenery merge together.

My heart was beating out of my chest as a distorted Nicaragua flew past me. I wanted to brake, but I didn’t want to fall, so I just kept going at an exhilarating speed, praying that I didn’t topple again. The noise was deafening. I let out a yelp that turned into a wail and clung to the ropes. Pebbles flew into my mouth, but I kept going—rocketing down Cerro Negro, terrified of how I was ever going to stop.

The collection of tiny people and boards, once so far away, were getting bigger. Their blurry images were coming into focus and I realized that I had to start braking or else I’d go plunging into them.

The slope was starting to even out and I could feel my board slowing down a fraction, but not enough to avoid a second collision. I tugged on the ropes once, twice, three times and then decided I would just have to stick my foot out and hope for the best.

I tumbled onto the sand and emerged covered in volcanic ash, my eyes and teeth glowing white against the black sand that covered my face. My jumpsuit was torn at the knee, I had a few minor scrapes and bruises, but I was still in one piece—grinning and wishing there was time to go again.

Booking Details
Booked through Bigfoot Hostel, León, it’s a 4.5-hour round trip and costs around $30, which includes everything from park entrance to “survivor” drinks back at the hostel bar.

Volcano boarding is a must for anyone visiting Nicaragua with a taste of adventure. Where else in the world can you surf an active volcano! 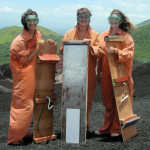 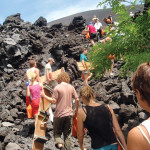 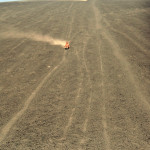