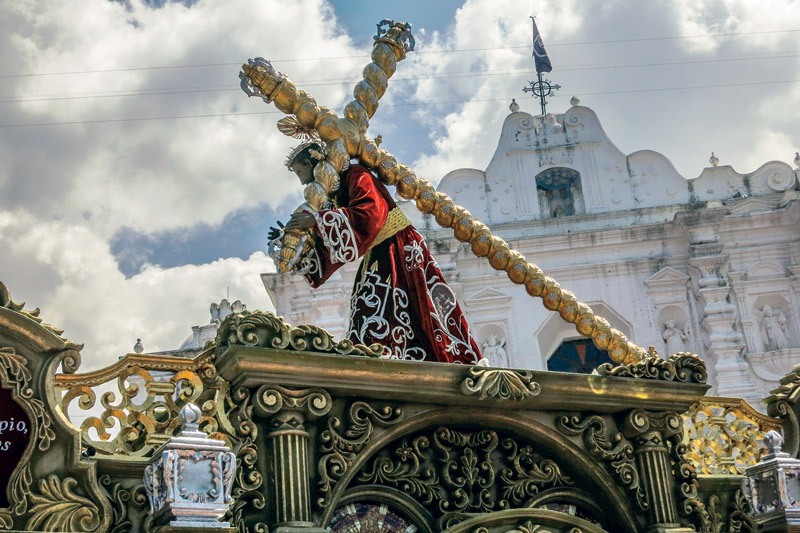 Despite thousands of visitors from around the world who descend upon La Antigua Guatemala for Lent or Cuaresma each year, I don’t think I will ever tire of its pageantry or elaborate celebrations. To be sure, the crowds during Semana Santa or Holy Week can be overwhelming, making it difficult to navigate the congested streets and cobbled passageways.

Yet, for me, the intoxicating scent of incense, the unconditional faith and devotion, as well as the privilege of being able to view hundreds of astoundingly beautiful and colorful sawdust carpets or alfombras, transcend the inconvenience. 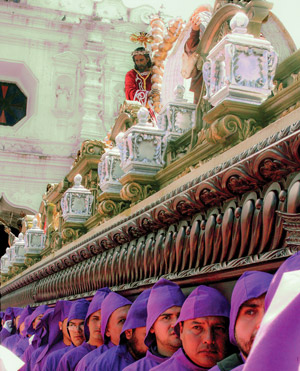 Most intriguing are the behind-the-scenes stories and legends that one becomes privy to when speaking with the locals. I am continually fascinated with a town’s history and those savory tidbits of information that reveal themselves if you just take the time to listen.

The village of Santa Ana, which is located about one kilometer from Antigua, is no exception. Each Sunday during Lent, and leading up to Semana Santa, several local congregations sponsor religious processions that depart from their villages and follow various routes through the streets of Antigua before returning to their church hours later.

The procession of Jesús Nazareno de la Dulce Mirada de Santa Ana, which takes place on the fourth Sunday of Lent, is one of the most magnificent, departing at 10 a.m. and returning to its church before midnight.

According to longtime resident Sergio Contreras, who has served as a member of Santa Ana’s Hermandad for more than 52 years, the population of Santa Ana is close to 1,500 and he estimates the number of families to be about 400.

Because their procession has grown exponentially over the years, the total number of people who now participate has increased to around 2,500. Volunteers from other regions in Guatemala and surrounding countries such as El Salvador come to Antigua just for the privilege of carrying the float or anda bearing the various saints and images. 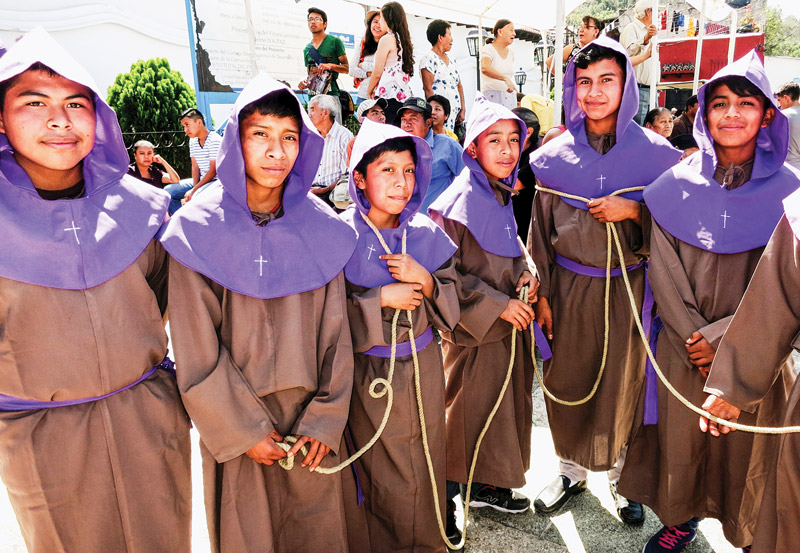 Using rope, these young men keep the path clear for the andas and its bearers

Don Contreras went on to explain that volunteers pay a small fee to be in the procession and must first be officially registered with the Hermandad. The money is then used to help fund the procession, paying for robes worn by the Cucuruchos (men who carry the floats) and for a new tunic for Jesús Nazareno de la Dulce Mirada each year. “Santa Ana’s procession is also renowned for its most beautiful adornments,” he stated proudly. 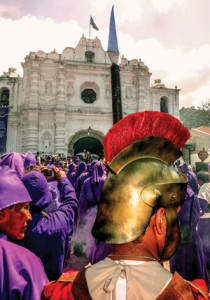 Founded in 1540, Santa Ana was one of the first settlements in the Panchoy Valley. The town has had its setbacks, however, beginning with the great earthquake of 1773 when both the apse (a semicircular recess covered with a vault) and dome of its beautiful church were destroyed.

Because the parish was very poor, repairs did not begin until the 1950s when Matilda G. Gray, a humanitarian and philanthropist from the U.S. who also owned a home in Antigua, underwrote the complete rebuilding of Santa Ana’s church. The work was completed in 1964 and a historical marker, commemorating her contribution, is located in the front of the church in the central square.

Last year, I arrived in Santa Ana at 9 a.m., just two hours before the procession began. I wanted to get a sense of the excitement and pure joy that the locals experience while creating their masterpiece alfombras. Dozens of happy children and families were scurrying about making last-minute preparations. 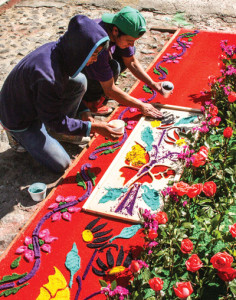 The alfombras are prepared throughout the processional routes using pine needles, fresh flowers, brilliantly colored sawdust and sand. I walked the narrow passageways that wind all through town admiring the teamwork and dedication that goes into these ephemeral creations.

“The alfrombras of Santa Ana are the most beautiful in all of Antigua,” declared Don Contreras. And while I have attended Santa Ana’s procession only twice thus far, I must admit that the alfombras in this village are among some of the most creative and unique works of art that I have seen in the area.

The image of Jesús Nazareno de la Dulce Mirada is approximately 450 years old and was originally believed to be the work of sculptor Bernardo de Cañas. It was later attributed to his assistant, an indigenous local whose surname was Balam.

“The locals eventually paid Balam in gold,” said Contreras. The unique characteristic of this particular sculpture, unlike so many of the others in the Antigua area, is that Jesus’ hair isn’t made from natural hair. Rather, it is carved from the same piece of wood and is part of the sculpture itself. 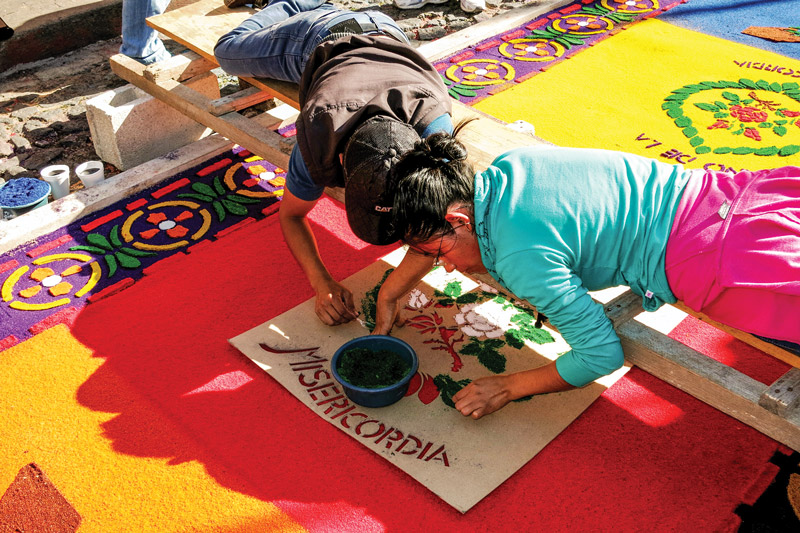 Detail work is key on many carpets