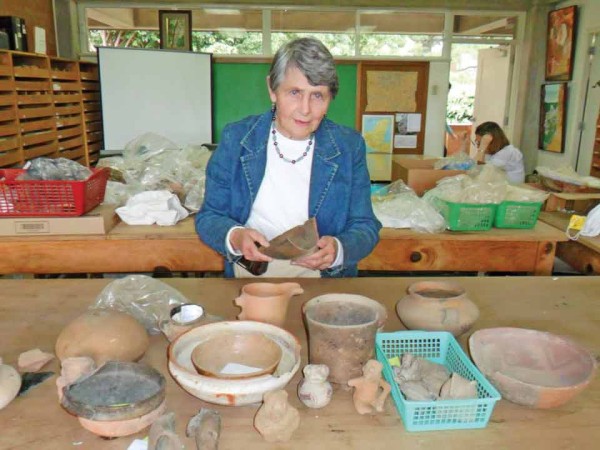 Parque Nacional Tak’alik Ab’aj (TA), a Mayan site on the South Coast of Guatemala, is unusual in two ways. It is the only site in the Mayan world that displays both Olmec and Mayan monuments concurrently and it has been continuously under exploration by Guatemalan archaeologists. At a well-reported press conference in October, archaeologists announced the discovery of the oldest Mayan royal tomb yet found in Mesoamerica, 2,500 years old, claiming that this makes Tak’alik Ab’aj the cradle of Mayan culture.

Marion Popenoe Hatch, who graduated from the University of California, Berkeley, and lives in La Antigua Guatemala, has worked there since the 1970s and spends a week each month at the site. She also works and teaches in the Archaeology Department at the Universidad del Valle, where she has a lab that studies ceramics from different Mayan sites. She analyzed and dated the latest items from the unique royal tomb, and her dates were confirmed by a radio carbon dating test by a Miami lab.

Q: Dr. Hatch, how does TA compare with other sites in Guatemala and how would you describe its significance? Why should people visit it?

Tak’alik Ab’aj is one of the most important Middle Preclassic Mesoamerican sites, founded around 800 A.D., the time when centers began to form complex society, centralized authority, strict division of labor, formal plaza arrangements, civic-administrative centers, long-distance trade, along with architecture and art. It has some of the earliest examples of Maya hieroglyphic writing and its astronomical observatory was involved in the creation of the Maya calendar, arithmetic computation and cosmology.

The site differs from others in the abundance of sculptured monuments in varied styles that are present, and is the only one that has both Olmec and Maya styles. This puzzled investigators because it was not understood whether the one preceded the other or evolved into the other, or whether they were contemporary. It is now known that the occupants were Maya, but the Olmec monuments were erected first as a means of expressing their control and domination of a large and extensive trade network in which TA was the principal mover.

Subsequently, around 500-400 B.C. the Maya took over the commercial enterprise and demonstrated this success by erecting their own sculptures at TA.

Visitors can observe the early structures, appreciate the range of artistic styles and gain insight into the cosmovision represented. In addition is the tranquil beauty of the site that defies time and fills the soul with the richness of human experience.

How long have you been working at the Tak’alik Ab’aj site and why is it still so interesting for you?
I have been with the Proyecto Nacional Tak’alik Ab’aj since its inception in 1989, except for three years in the 1990s when I worked at Kaminaljuyu (another Maya trade center, the site can be visited in Guatemala City, behind CEMACO off Calzada Roosevelt). I also worked at TA during the 1970s, with the University of California, Berkeley.

The site of TA has been of particular interest to me for several reasons:
1. There was almost nothing known about it, and the number of sculptures in different styles triggered questions about the identity of its occupants, and what its function was.

2. For a long time I have been interested in the relationships during Precolumbian times between the South Coast and the Highlands of Guatemala, about which TA could provide new and important information.

3. TA, because of the presence of sculptures in both Olmec and Maya styles, could provide evidence regarding the chronological and cultural relationships between the two cultures which were not known when the project began.

Proyecto Nacional Tak’alik Ab’aj has now provided answers to all of these topics and more information is constantly forthcoming.

You spend a week each month at the site. You even have a room in the field camp there. You have a lab. What do you do there?

When I go down to the site every month, I spend all of my time analyzing the ceramics—shards, mainly, but sometimes whole vessels—that come from the excavations. The analysis consists of separating the material into different types and dating it. The task is then is to try to determine what can be observed by the ceramics and to ask questions: To what phase does the construction belong? What activity took place? What contacts with other regions are evident and what was the trade orientation at the time? What was the function of the structure that was being excavated?

The site is very active and never closes down. Although the workers take their vacations around year-end, they alternate so that some are always present and the work continues. The directors, Miguel Orrego and Christa Schieber de Lavarreda, have never taken a real vacation. For this reason we have been able to answer each set of questions and move forward to the next, systematically filling in the picture of the development and growth of the center from its beginning to its end, an uninterrupted period of some 1,800 years.

You mentioned the astronomical observatory. What did that do?

The presence of the astronomical observatory at Tak’alik Ab’aj shows that this site played an important role in the development of the Maya calendar. When TA was founded, the observatory and its structures were aligned according to the Olmec cosmology, which focused on the constellation Ursa Major. When the Maya gained control of the commercial and sociopolitical network around 400 B.C., the orientation shifted slightly to focus on a star in the constellation Draco.

Later, around 200 A.D., solar observations replaced using the stars for keeping track of day counts. This helped predict best times for crop planting and planning of harvests. In this endeavor, it is evident that Tak’alik Ab’aj was in close contact with other Maya sites for comparing lunar, stellar and solar movements for weather prediction and other calendrical purposes. The need for keeping records led to the invention of writing, and some of the earliest texts in Mesoamerica are found at Tak’alik Ab’aj, dating to several centuries B.C.

This is not an exploration funded by a foreign university, like so many others, is it?

TA remains the only archaeological project completely funded and directed by the Guatemalan Ministerio de Cultura y Deportes. For this reason, in contrast to other projects, the investigations have never been limited to a certain length of time, or have suffered interruptions while awaiting more funding. The success of the project is due to the selection of well-prepared directors and dedicated and skilled employees, many who have been with the project since its initiation 24 years ago.

SIDEBAR
Dr. Hatch’s instructions how to get to Tak’alik Ab’aj: www.cernikovsky.com/TA.htm, (Tomas and a group of 40 people will be visiting the site the first of December.)

How readers can help support this project: Marion Popenoe Hatch teaches at the Universidad del Valle de Guatemala. The archaeology department offers a five-year degree course, “Licenciatura en Arqueología.”
Currently, there are 18 students in the program. Funds are urgently required to help with scholarships. If you would like to help and contribute any amount, however large or small, please visit www.cernikovsky.com/TA.htm for details.

Visit the same page for more about the just-announced discovery at TA of the oldest Maya royal tomb in Mesoamerica.