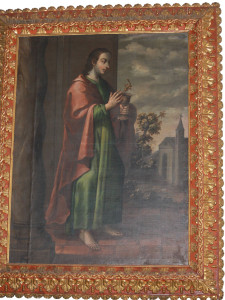 The restored painting of St. John

Close to 10 years ago, while admiring some Christmas decorations at San José Catedral in Antigua, I was astonished at the poor state of preservation of the colonial paintings. All of the original colonial art had been moved to the new capital in 1773, except for the 1680 paintings of the apostles by Mexican artist Juan de Correa (1646-1716). Restored at one point many years ago, they certainly needed a “refresh” button!

Previously we had sponsored restoration efforts at the Museo de Arte Colonial across the street. My goal then was to restore one painting a year; I contacted expert Guatemala restorer Margarita Estrada to begin the task.
The first, San Pedro (of course) presented serious problems. Previous restorations were not done well and most likely damaged the work. Techniques today have become scientific, and we all use UNESCO guidelines to save these priceless art objects.

The other paintings of the apostles followed…usually taking a year or two, as time would tell. We were able to get Flavio González on board—a UNESCO-trained restorer from Antigua with more than 25 years of experience. The painting of St. John was one of my favorites—it was so dark before the restoration that you could not see the serpent emerging out of the chalice. I was able to learn a lot about the iconography (symbols) in each painting. 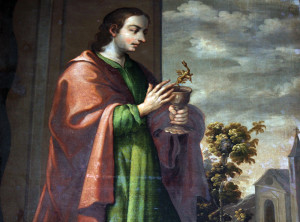 Close-up of St. John painting showing the serpent emerging from the chalice

While considered by most as “dark art,” darker reds, greens and browns are prevalent. Expensive light blue paint was somewhat scarce and the seams on the paintings indicate how wide the colonial canvases for this collection were. Last year we added an 1830 Virgin of Guadalupe to the restoration efforts, as its canvas was so badly damaged; its sheer weight had it pulling itself apart with the passing of each year.

So eight apostles and a Virgin of Guadalupe later, we can say, “We did it!”—I would like to thank those participants on my tours who have also helped in accomplishing the task.