From the roof of the house where I am staying I can see two volcanoes — Agua and Fuego (side by side with the inert volcano Acatenango). They are the giants that dominate the local landscape, and often seen in picture-perfect postcard images, especially the dormant Agua, located approximately 3 to 6 miles from the city of La Antigua Guatemala. 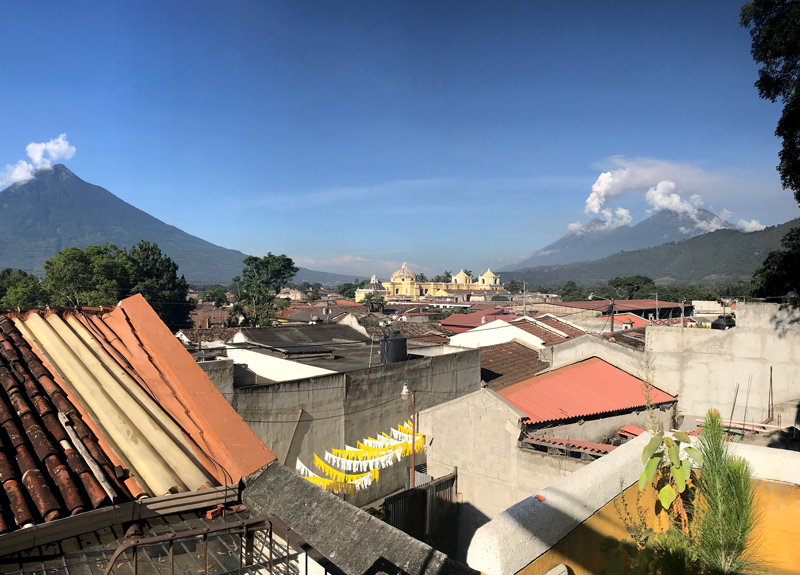 On June 3, 2018 Fuego erupted in all its fury, destroying the small communities of El Rodeo and San Miguel Los Lotes. The death toll continued to rise as rescue workers search for those caught in the fury of the pyroclastic flow. Two smaller eruptions followed this major eruption, one on Tuesday, June 5 and another on Friday morning, June 8.

Volcán de Fuego in Guatemala erupted on January 31, 2018, and Landsat 8 acquired an image of the eruption a day later. (images by USGS)

All of that being said, there has been a lot of misinformation or misappropriated fear in the news, especially in the news abroad. Based on the reports, one would think that the entire country of Guatemala has blown up. This is not true.

It is important to read the new and to take in the dramatic images and videos from the eruption. Grieve with the people who are grieving and support the relief efforts as you are able to. It is important to make sure you are donating to a recommended group or a qualified organization.

Learn as much as you can about the fragile economy of the country and the problems that plague the government here. Study maps of the affected areas. Pray for the victims and their families.

Yes, it is smart to have a healthy skepticism of travel in the aftermath of a natural disaster, especially if travels to Guatemala included climbing volcanoes. I climbed Pacaya last summer even though it is an active volcano. What I don’t want to see happen to this already affected country is for people to stop visiting.

Guatemala depends on tourism and it needs it now more than ever. I am not saying people should put their life in danger, but I think it’s important to understand the reality of the situation before making any decisions.

Understanding the reality starts with facts. 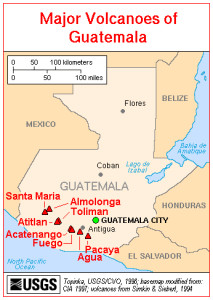 Guatemala sits on the “Ring of Fire” and has many volcanoes in the southwest part of the country. (image USGS)

Fact #1-There are active volcanoes in Guatemala;

Fact #2- Guatemala sits along the “Ring of Fire” which react to the interaction of the tectonic plates;

Fact #3- The Guatemalan people have been dealing with volcano eruptions and earthquakes since first inhabiting the land;

Fact #5-In Guatemala life continues after natural disasters occurs. It must. There is no other option.

I arrived in Guatemala City days after the eruption, late Wednesday evening, June 6, and everything seemed “normal” on the plane and at the airport. The flight was mostly full, with maybe one or two unoccupied seats. Thursday morning I walked my normal route to the school, looking for signs of disaster or destruction.

After watching the news for nearly three days in Houston, Texas, I expected the whole area to be either in chaos or in mourning. Instead, as I passed tiendas and people on the streets, they extended a welcoming “Buenos dias,” and I continued on my way.

Dirt and ash piles were evident the streets to be removed by city workers. They also shoveled the ash out of the drains and for safety’s sake wore masks to prevent excess inhalation. Everyone else walked to work or school without much external expression of crisis.

Yes, the streets and sidewalks are a little more dirty than normal. Yes, people are collecting funds and volunteering with relief efforts. But the majority of the destruction — and the images on the news — was localized to the southeast facing slope of Fuego.

For residents of Antigua and the surrounding villages, life continues. There is no other choice. Parents need to work. Kids need food. Families depend on daily income to survive. One day without work is one day without food. For the students at Escuela Integrada one day without school might be a day without nutrition or dental hygiene — the kids eat two nutrient-rich meals per day at the school and brush their teeth after. A day without school is assuredly a day without the security of a safe environment where they will play, learn and grow as kids are supposed to do when they are young.

The school was closed Monday and Tuesday to clean up from the ash that fell from the eruption, but everything was back up and running by Wednesday. When the kids returned to school Wednesday, they participated in Arts Expression Week and hosted a Guatemalan Festival wearing traditional clothing and celebrated local customs and food. It was a beautiful demonstration of the resiliency required by life in a developing nation. 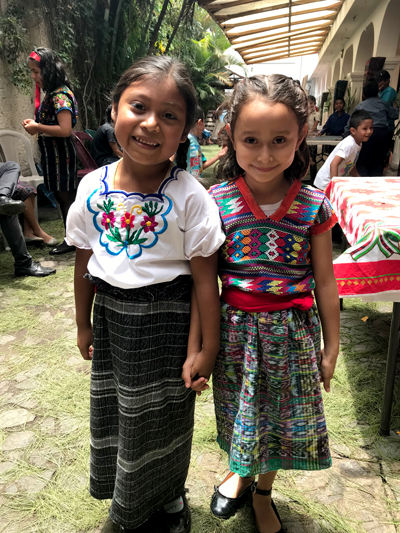 Two girls from Escuela Integrada wore traditional Guatemalan clothing during a festival to celebrate the country’s customs and food on June 8, 2018.

Before my flight left Wednesday, I spent a couple hours in prayer. My biggest question was, “God, is it still in your will that I go to Guatemala, or is it my ego that refuses to give up my already-made plans?”

Thankfully, as a person of faith, I was able to take all of the news, hesitations, ego implications, desires for ease and comfort and on-the-ground information from friends in the area and place them before God. In doing so, I felt far more desolation when I considered the possibility of not going, much to the concern of loved ones. Consolation does not necessarily mean feeling “happy,” but, instead, that with a decision comes peace and a sense of moving toward what God is asking.

Discerning a decision in this way does not mean that I should act without regard for the realities of the world, or that I should actively put myself in harm’s way, but that I should listen to the quiet voice in my heart to determine which direction to go.

My decision ultimately wound up in the camp of “Go, try it, see what it is like, and, if it feels unsafe, come back.” I am extremely lucky to have that as an option in an era where many people do not, but that is for another discussion (or a review of last year’s story on citizenship privilege).

So, for now, I am in Guatemala, surrounded by the challenging presence of active volcanoes, aware of the dangers that exist and choosing to continue on the journey. And, if things change or the situation gets dangerous, I will come home.

Not everyone will reach the same decision, and that is okay. I would, however, encourage anyone who is considering travel to Guatemala to consider the realities of that type of experience, and to bring it before God in prayer.

Visiting Guatemala has never been about luxury travel. Instead, my time here is fueled by an intense desire to connect to the life my grandpa, my dad and my namesake knew in Latin America. And the commitment to use my vacation — and vocation — to give voice to people and issues I see remiss in the news. The news is now talking about Guatemala. Let’s continue the conversation far beyond eruptions to truly advocate for change in this beautiful country.

Autumn Jones lives in Guatemala during the summers to volunteer as a writer and social media manager for Escuela Integrada in Jocotenango. During the academic year, she teaches journalism at a public school in Colorado. Twitter: @faithful_writer.

Research for this article