Ruin of inside wall of Hospital Real de Santiago, now within a private garden

What medical options were available centuries ago in Guatemala for wounds from enemy arrows, burns, natural disasters or epidemics?

What was done in 16th Century Guatemala for wounds from enemy arrows and clubs? Or repeated and prolonged epidemics? Or burns from fires that raged through farms? How was one treated in case of a lion attack? Domingo Juarros records an offer of substantial reward of gold or corn to the one who would kill a lion of ‘extraordinary size’ that kept descending Volcano Agua, terrorizing Almolonga, the second site of the seat of the Spanish Kingdom in Guatemala.

It was not an easy place to live. The Spanish brought diseases to which the indigenous people were vulnerable, and the new land presented tropical diseases unknown to the Spanish. As if all that wasn’t enough, natural disasters wreaked their havoc again and again. And again and again the people turned to religion for all they could expect: a little comfort to ease the pain and, they believed, appease the powers that had caused it.

Then came September 11, 1541. Saturated slopes of Volcano Agua released earth and trees and rocks and boulders to rush through Almolonga and kill half the population. It was not the only time the people would believe the end of the world had come. Bishop Francisco Marroquín gathered his remaining flock together and post haste identified a place for relocation, not far away where now is called La Antigua Guatemala. The move was affected in December.

They were a tired, broken people indeed, both physically and psychologically, virtually all of them grief stricken, some orphaned children or grandparents whose families had perished as well as their homes. All of them had experienced trauma as never before. It seems fair to guess that many had fractures, wounds or infections from the muddy waters that mercilessly knocked everything and everybody out of their path.

There had been a hospital in Almolonga, Hospital de la Misericordia, the first to be built in Guatemala. It was basically a place for the poor and a shelter for pilgrims. Durán calls it “a simple thatch hut to shelter orphans and invalids.” In Almolonga medicine almost did not exist. No records list those cared for with disease or injury; no doctors appear on population lists.

Hospital de la Misericordia had been ordered with royal priority and prominent location. In that time of Spanish conquest King Charles V issued a decree for the founding of hospitals for all people under Spanish jurisdiction. Years before, Dominican Fray Bartolomé de las Casas had begun the struggle for hospital attention for the indigenous people. After the move, some Franciscan clergy remained to care for those who would stay in Almolonga.

But hospitals then were not as we know them today. Medical care, such as it was, was given in church atriums and arcaded corridors of convents. This created a fertile field for fast-talkers and opportunists who presented themselves as doctors, including barbers who did the bleeding. Chronist Francisco Ximénez writes of one who “took pulses of the sick as often as he took them to the cemetery.” Antonio de Remesal tells of one in Almolonga who put the people in greater danger than anything else, burying “more Spanish in one year than had died in 10 wars of the New Spain.” The man was prohibited from seeing patients, a prohibition lifted due to lack of doctors in the great need after 9/11/1541. No wonder the people feared doctors.

Interestingly, in Europe at that time Spain was flourishing and, with a long history, had become the leader in medical facilities. Laurentino Díaz López records hospitals and a school of medicine since the 10th Century. Spain had “six mental hospitals when England, France and Germany had none.” In the colonies, hospitals had been built in Santo Domingo and Mexico. But Spanish days of glory were fading by the time its medicine came to Guatemala in the 18th Century.

Meanwhile, time passed and life returned to Santiago de los Caballeros, as the new capital was then called. The beauty of the flowers and kindness of climate helped to heal the horror. Optimism rose along with the walls of beautiful churches and monasteries. The people were willing to forgive the powers that had rained terror on them.

But it didn’t take long for the compassionate Dominican Brother Matías de Paz to notice the indigenous poor dying on the streets due to cold, bad food and lack of hygiene as they worked digging foundations for noble housing. He bought a site near the plaza of the church of Candelaria, off the northeast end of town, and built a thatch roof house to shelter the sick he “carried on his shoulders when they could not walk,” says Dr. Fidel Aguirre Medrano. He went through the streets collecting funds to feed those in what would become Hospital de los Indios, or Hospital de San Alejo, the second to be founded in Guatemala.

With increasing numbers in his care, de Paz realized he needed help and moved the work to across the street north of the Santo Domingo monastery. Even then, records Dr. Ramiro Rivera Álvarez, support became so difficult that a man and his wife were named to go to the butchers and solicit a pound of meat for each patient.

In 1559 the king agreed to sponsor the hospital that had been built for Spanish and mulattos in 1553 on a site Bishop Marroquín had purchased within city limits, on Calle de la Concepción, now 4a calle, at 2a avenida. According to Ximénez, the site was to include the hermitage and Hospital de Nuestra Señora de los Remedios, to whom it would be dedicated and which name it originally carried, as did Hospital de la Misericordia in Almolonga. Research does not explain why that hermitage was not built there but years later on the south edge of town. Once under royal sponsorship the name changed to Hospital Real de Santiago (Royal Hospital).

Marroquín recommended the efficiency of joining Hospital de San Alejo and Hospital Real de Santiago. The hospital would have four rooms, separating the indígena and the Spanish. It sounded like a good plan, but neither Marroquín nor the king expected the strong resistance of the indigenous people to sharing a facility with the Spanish. The joint hospital was tried, separated, tried again but separated again in 1578. The indigenous …continued on page 44

patients reoccupied Hospital de San Alejo, with a stipend from the king and administration by the Dominicans. The king had added a public pharmacy, a service the Franciscans also would offer at their monastery. Meanwhile, Bishop Marroquín died in 1563, leaving a remarkable legacy of service.

A medical administrator first came to the Hospital Real in 1595, then the order San Hipólito, then another doctor and finally in 1667 the Order of San Juan de Dios, the sole purpose of which was overseeing care of the sick. Hospital de San Alejo was delivered to the Order in 1669, a decision not accepted easily by the Dominicans, who had been in charge for almost a century. Authorities had not given up on joining the two hospitals and gave the order once and for all in 1685. The new facility, not taking the name of either, became Hospital de San Juan de Dios, under which it functioned until 1776.

The peace that had returned to the town after its establishment in 1541 was not to last. Various plagues and diseases, including perhaps typhoid, recurred for 20 years, with, according to Durán, “…the doctors so necessary in those times conspicuous for their absence, and only saints and virgins could heal and comfort.” Earthquakes and volcanic eruptions continued, not to mention that the beloved Bishop Marroquín’s successor was his opposite. Little was recorded of medical care in the last years of the 16th century; obtaining funds was always a struggle. But Marroquín had left terms in his will by which he would again years later care for the people. 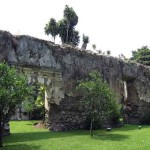 Ruin of inside wall of Hospital Real de Santiago, now within a private garden 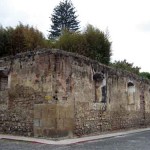 Outside walls of Hospital Real still stand at 3a calle and 2a avenida. 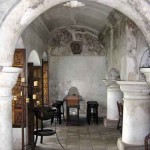 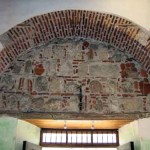 Remaining arch of hospital chapel niche may be seen inside a commercial property on 4a calle. 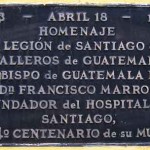 Plaque on outside wall of restaurant on 4a calle identifies site of Hospital Real de Santiago. 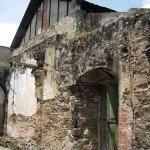 Behind rear wall of hospital chapel, now on private property

The author thanks Dr. Johnny Long for assistance with this article.

Next month: Three more hospitals serve Guatemala in the 17th and 18th Centuries.