The latest medical advances in Spain were slow to reach Guatemala which saw its first autopsy in 1622. Hospitals were simple asylums for the sick, consoled by religion. 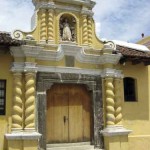 Ruins of convalescent Hospital Belén founded by Hermano Pedro, adjacent to the Church of Belén, off the northeast corner of the plaza.

The municipal cemetery at the west end of La Antigua is located on the site of colonial Hospital San Lázaro for lepers.

By 1600 Hospital Real de Santiago and Hospital de San Alejo had been up and running for almost 50 years. Still, in Santiago de los Caballeros, the capital of the Spanish Kingdom in Guatemala, now La Antigua Guatemala, “the scientific poverty of the 17th century” enslaved doctors in circles of useless theories, wrote Carlos Martínez Durán in Las Ciencias Médicas en Guatemala. “Hospitals were simple asylums for the sick, consoled by religion.”

Medical advances in Spain were a long way from Guatemala. A surgeon, Juan de los Reyes, arrived and became the first medical administrator of Hospital Real in 1595. He also took up the challenge of demanding that all persons who presented themselves as doctors show their credentials. This, of course, was something most could not do. But word of the flourishing new capital lured the ambitious, some good, serving years without pay, and some not-so-good but with hopes of a comfortable livelihood. In 1612 the municipality supported a demand to crack down on all who practiced medicine without credentials “as required by the laws of the kingdom, which practice results in much harm to the town,” records Durán.

Persistent efforts of the municipality brought to Santiago a degreed doctor from Mexico. In 1622 he accomplished what is believed to be the first autopsy in Central America, after an apparent suicide by poisoning at the town jail.

Civil authorities further demonstrated their concern for healthcare in 1636, recognizing the need to isolate the number of lepers who roamed the streets. Records show that the disease had been carried to New Spain by African slaves. The townsfolk feared the lepers, believing the deforming skin disease to be contagious. To isolate the disease, the Captain General, per King Philip IV, ordered construction of a hospital outside the west end of town near the Guacalate River. There a mill for grinding wheat could add income to the stipend granted by the king to support the hospital. In 1640 the Order of San Juan de Dios, which had been administering Hospital Real for three years, accepted administration of the third hospital in Santiago, Hospital San Lázaro.

Earthquake damage in 1717 vacated the hospital. By the time it was reconstructed in 1734, some patients had found refuge in town with the Bethlemite Order; others apparently were left on the streets. According to Verle Annis, an edict directed that all lepers in other hospitals or free should be placed in the rebuilt hospital. Abandoned after the 1773 quake, the property became the municipal cemetery in 1834 and remains so today.

Backing up to 1636, at the same time the Captain General was concerned about the lepers, Bishop Bartolomé González Soltero was anxious to build a hospital for clergy, complying with the Council of Trent. A bronze plaque on the side of the church of San Pedro Apóstol credits Bishop Marroquín with the work, but in fact Marroquín had had his hands full before he died a century before. Eventually Bishop Soltero bought a house with cathedral funds to be used for the project. But the scarce funds allotted for support were instead distributed where they were more needed. Although “they were very numerous the religious that existed at that time in the city of Santiago de Guatemala,” not many were sick or aged, writes Dr. Fidel Aguirre Medrano.

The first stone was finally laid in 1646, but the epidemic of 1647 delayed construction again. More than 1,000 died in a few months, and the doctors couldn’t help. In fact, according to Durán, “they had the custom of fleeing the city when the plagues entered.”

Then, during a series of earthquakes in 1651, wild animals came into the town, including a fierce lion that roared through, ripping papers from the wall of the Town Hall. “What next?” the people must have groaned. “Will we ever have peace and health?” But according to Domingo Juarros, reports of disasters and epidemics of that time often make no mention of hospitals or care, only prayers to religious figures. It was believed that the bishop placated divine justice and health returned when he went barefoot in processions. Alas, work was delayed again when the bishop died.

Hospital San Pedro Apóstol was finally ready for clergy patients in 1663, administered by the Order of San Juan de Dios. A doorway flanked by twisted columns and topped with a niche with similar columns, on 3a avenida behind the present church on 6a calle, may have been the entrance to a chapel of the hospital before the church was built.

After the earthquake of 1773 Hospital San Pedro Apóstol served not only clergy but the community as well. Although purpose and administration changed over the centuries, the hospital, now called Obras Sociales del Santo Hermano Pedro, is the only colonial hospital that has continued until the present time in La Antigua Guatemala.

The young Pedro de San José Betancourt, now Santo Hermano Pedro, arrived in Guatemala in 1651 with a passion to serve his fellow man, echoing the efforts of Fray Matías de Paz and Bishop Francisco Marroquín a hundred years earlier (see Part I in June Revue). In a simple, donated thatch-roof house on the Pensativo River, south of the San Francisco monastery, Hermano Pedro ministered to the sick and the poor he had brought from the street, his first patient being an African slave. Support came from donations and from 30 community families who each provided food one day a month for the dozen-or-so receiving care.

Pedro solicited funds and land for the growing number of convalescents in the hospital he started to build. Although he would not live to see it finished, those who followed not only finished construction of the hospital, which functioned officially in 1667, but formed the Bethlemite Congregation, which went on to found hospitals in South America. Hospital Belén was the first convalescent hospital in New Spain, for recuperating rest and comfort, and the fifth and final hospital founded in Santiago de los Caballeros. Some lepers found refuge there after the 1717 quake. In 1740 there were 20 beds for men, 8 for women. After the 1773 earthquake the work moved to the new capital, now Guatemala City. And Hermano Pedro became the first saint from Central America in 2002.

By the end of the 18th century there were many complaints against the Order of San Juan de Dios. The brothers had come from Portugal with the sole purpose of founding and administering hospitals. Despite the lofty mission, members of the order had fallen to padding their own pockets. The prior himself was caught by surprise one night, ready to run off to Mexico with trunks packed with hospital supplies. Durán writes, “It’s incredible that a prior of the brothers of San Juan de Dios had lasted more than 15 years administering the hospital, with grave detriment to the health of the sick and integrity of the funds.”

The colonial hospitals circuited a complicated maze of founding, ownership and sponsorship. It was common for a bishop or church or monastery to acquire land, sometimes purchased, sometimes through gifts or inheritance, and assign income from crops or animals for particular works. This surely led to tricky politics.

But probably no more so than the vying for European thrones during the same period or clever taxation schemes in the American colonies. In 1710 England taxed soap as a frivolous luxury. On the bright side, in 1714 champagne was invented in France, and the first typewriter was patented in England.

The author thanks Dr. Johnny Long for assistance with this series.
Next month: A medical school is founded in Guatemala.