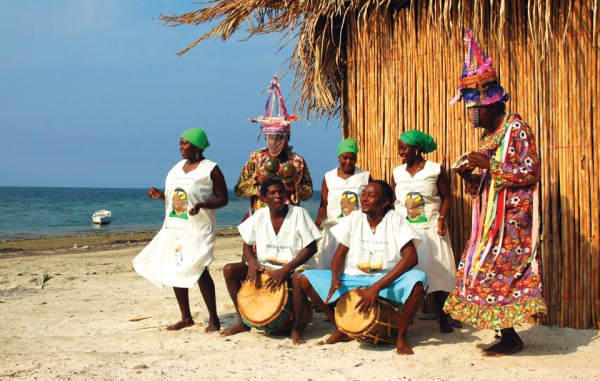 A great number of Garifunas live on the Bay of Roatan, where they maintain their rich cultural traditions of music, dance, cuisine and much more.
Garifuna music styles are known for their heavy use of percussion instruments and distinctive drumming, which combines the beats of primero (tenor) and segunda (bass) drums. Garifuna drums are usually made from hollowed-out hardwoods such as mahogany or mayflower, which are native to Honduras and other Central American countries.

The Garifunas are widely known for their punta, an evolved form of traditional music played on traditional instruments. It is the most popular and well-known genre of Garifuna music and dance. Punta lyrics are typically written by Garifuna women and often relate to one gender or the other. Described as “consciously competitive,” the energetic punta dancing is always a thrill to watch.

Belize has given birth to a whole new phase of Garifuna music in the last few years, thanks to famous Garifuna musicians like Andy Palacio, Mohobub Flores and Adrian Martinez. This contemporary take on more traditional Garifuna music styles has been described as a mixture of punta and paranda, another Garifuna genre that was barely recorded until the 1990s. Many younger Garifunas tend to show more interest in a popular, contemporary version of punta known as punta rock, a mix of traditional drumming, heavy bass, electric guitar and enthusiastic lyrics.

Garifunas are also known for their tasty food and drinks, typically made from a combination of native Central American crops and African staples. Most traditional dishes include fish, chicken, cassava, bananas and plantains. Machuca, probably their most famous and recognized dish, consists of mashed green plantains with coconut milk soup and fried fish, and it is the most common example of a traditional Garifuna dish. Dharasa, the Garifuna version of a tamale, is made from green bananas and can taste sweet or sour. The delicious cassava bread is served with most meals along with other Garifuna breads, including buns, banana bread and pumpkin bread.

If you have the chance to visit a Garifuna village, do not miss out. Learn about their food, drinks, dance and much more.