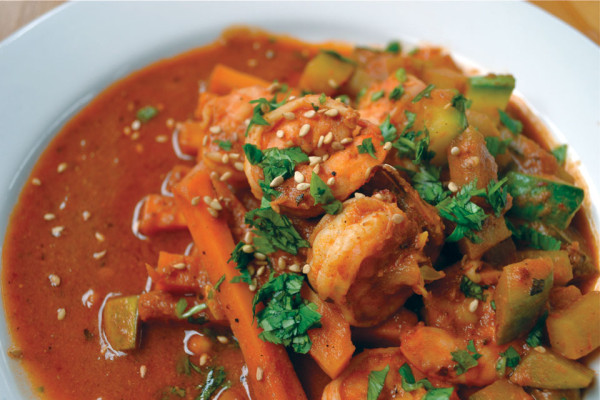 An update on a Guatemala’s signature dish

The first thing people ask me in Guatemala after I tell them I am a food writer and avid cook is, “Have you made pepián?”

As luck would have it, I have. Not once, but on three separate occasions with three local women as distinctive from each other in age, socioeconomic status and life experience as they could be. Each possesses a recipe for pepián passed down to them from their mothers and aunts and grandmothers. Each family’s recipe is unique. A child born into a family who likes their pepián thick—more like a stew than a sauce—will most likely eat it this way for his or her entire life. He or she will prepare it for his or her child and in turn that child will prepare it for his or her child in the same manner. God forbid if that child marries someone whose mother prepared her pepián thinner and more caldo-like, as there is bound to be trouble.

Pepián amounts to a hearty, chocolate-hued stew comprised of chicken, pork, or both, carrots, potatoes, güisquil and güicoy, all swimming in an aromatic broth. Toasted tomatoes, miltomate, cilantro and sesame and pumpkin seeds are blended into smooth gravy with the help of a blender. (Even an authentic Guatemalan kitchen is not without its modern conveniences). It is served with rice and/or corn tortillas. Pepián is a balanced blend of both Mayan and European influences. Seeds were widely popular in pre-Columbian Mesoamerican cooking; there is evidence that ancient cultures used squash seeds or pepitas over 4,000 years prior to the first evidence of beans and more surprisingly, maiz. Meat, especially pork, is the European influence, but one is not likely to find another food as widely accepted as the national dish of Guatemala than pepián.

Although I love the traditional version and my experiences cooking with my maestras, I wondered if pepián could have a new life in a different culinary sphere—more Gen Y foodie and less family gathering-fare. I wanted to entertain with it, to present it to a room full of friends, serve it with glasses of wine or cocktails, after an appetizer but before a lemon soufflé. It would still, of course, need to be delicious and hearty, a dish worth sitting down for and enjoying with good company, like the original. With shrimp substituted for chicken or pork and a vibrant red sauce with a kick of heat (green sauces are all the rage in el norte, Mexico), this version is positively dinner-party ready while firmly maintaining its roots in tradition. Grab some friends and a bottle of wine—this dish deserves a party. So, round up your guinea pigs, er, taste testers, and give it a try.

Rice, tortillas de maíz, lime wedges and more chopped cilantro to serve
Over medium high heat in a medium sauté pan, toast dried chilies, onions and garlic until chilies are medium brown (about 1½ minutes per side) and onions and garlic are lightly charred (about 3 minutes per side). Remove and set aside. Toast sesame seeds until just golden (about 2 minutes). Be careful to cover the pan, as they will pop out of pan. Do not burn.

In a blender combine toasted chilies, garlic, onions, sesame seeds, cilantro, tomatoes, chiltepe peppers, salt and enough water to blend to a smooth paste; run blender until ingredients are liquefied and the texture of mayonnaise. Set aside.

In a deep pot, add carrots, güicoy, qüisquil, broth, and enough water to just cover vegetables. Bring to a boil, add sesame paste, reduce heat and simmer rapidly uncovered for 20 minutes. Add shrimp, cilantro and salt to taste; stir to combine and simmer another 5 minutes more. Shrimp will be bright pink and vegetables should be tender but still have a slight bite. Remove from heat and serve immediately with rice or tortillas de maíz, lime wedges and more chopped cilantro.

Wine suggestions – any light white wine or dry rosé will go well with this. Try a fruity and crisp Sauvignon Blanc.