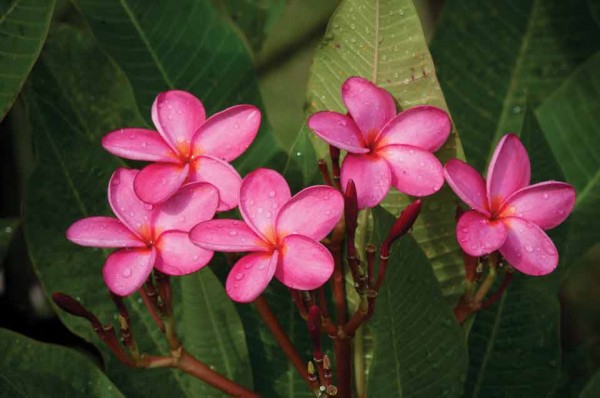 Flowers are part of Mayan decoration, outfits and rituals. Kings wear flowers in the headdress. In addition to being purely decorative, flowers have deep meaning in Mayan religion and folklore.

Especially between the 3rd and 9th century AD, perhaps a dozen different flower species are depicted in Classic Mayan murals and in art on funerary ceramics. For many years I have worked on the ethno-botany of flowers sacred to the Maya and found in Mayan paintings, especially on Mayan vases, bowls, and plates. This article introduces the names of the most commonly pictured flowers and shows examples of the Flor de Mayo.

Flowers related to the underwater world
The water lily flower is relatively well known since it is pretty much the flower most frequently pictured in Classic Mayan art. During the 1970s and 1980s, I did extensive research on the symbolism of the white water lily flower. My Ph.D. dissertation has abundant information and is readily available in published form, Monster und Menschen in der Maya Kunst. So in the present article I would like to move to other flowers.

Flowers related to drugs to induce ritual trance
The Aztec and Teotihuacan cultures of Central Mexico are best known for using chemicals from plant products to alter their state of consciousness. The Classic Maya seemed to concentrate on the Bufo marinus toad, on alcohol made from balche and other plants or fruits, on the seeds of the sacred water lily, plus tobacco (as documented by Francis Robicsek).

Flowers and hummingbirds
The hummingbird is a major denizen of the mythical Mayan zoo, so you can expect a lot of flowers in reference to this bird. Oswaldo Chinchilla has done the most recent studies of hummingbird in Mayan lore and iconography (Museo Popol Vuh, Universidad Francisco Marroquín).

What flowers should we look at?
Sacred or otherwise important flowers in the ancient Mayan world include:
• Flowers carried by leaf-cutting ants. The Popol Vuh mentions Chipilín flowers: white petaled, red petaled, yellow petaled, crotalaria longirostrata or Crotalaria guatemalensis.
• Flowers associated with earrings. There are many flower-related earring designs.
Specific flowers may include:
• Water lily
• Other lilies that frame busts of individuals in Jaina figurines
• Flor de mayo
• Flor de muerto, the marigold, Tagetes erecta
• Squash flowers (associated with the ballgames of Bilbao and Chichen Itzá)
• Flowers of other vines. Many flowering vines decorate bowls and vases of Tepeu 1 and Tepeu 2 of Petén and related ceramic styles.
• Cacao was probably the most special plant to some Mesoamerican people, second only to maize. So we might expect its tiny flower to be revered.
• Flower of zapote bobo, Pachira aquatica.
• Flower of ceiba tree (related to zapote bobo).
• Although the Pachira aquatica has been singled out as a natural model for flowers in Mayan art, I would also like to point out the following flower species as worth comparing with Mayan art: Amapola, Pseudobombax ellipticum (shares some features with Pachira aquatica).

Obviously, every plant whose fruit or seeds were used by the Maya also had flowers. The red seeds used for divination come from the Palo de Pito. We raise this in the Mayan ethnographic garden around the FLAAR office.

Additional flowers are also evident in vase paintings, murals and stelae. Because this is the month of May, let’s now look at one flower, the Flor de Mayo, commonly known as plumeria or frangiapani—also the sacred flower of Lacandon Maya and Classic Maya.

This flower, also named sacuanjoche, is the national flower of Nicaragua. The plumería flower (of many diverse species) is the national tourist flower of Hawaii since it is the flower used in a lei. The plumería family of bushes and small trees has a multitude of different species; each has its own colors for its flowers. The Mayan word for this flower is spelled variously—nikte or nicte.

The interest in nikte flowers is because in Lacandon myths the Lacandon Maya of Chiapas specifically mention that certain of their gods were born of the nikte flower.

The Flor de Mayo blooms abundantly on the highway up to Cobán, Alta Verapaz, especially just after you turn north after leaving the Carretera al Atlántico. There is even a town along the road named Flores de Mayo. What is interesting is that the natural habitat for this plant is so seasonally dry, yet it is claimed to be a flower common to the Lacandon Maya of the rainforests of Chiapas (perhaps they brought this flower with them from the drier area of Yucatan, which is their origin).

You can buy Flor de Mayo trees in any vivero in Guatemala. They also grow well from cuttings. They grow in my ethnobotanical garden in Guatemala City but almost never have leaves and never flower (at least not in four years).

I wanted to single out this pretty flower for May. And also to remind the world that this Guatemalan flower is a world ambassador to tourists in Hawaii. The lei is a flower of the plumería. I am assuming this is not native to Hawaii, and that most of the lei flowers are from plants originally brought from Mexico, Central America or South America.