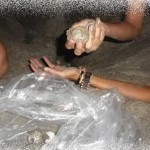 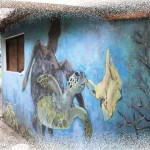 Nesting season for sea turtles is in full swing along Guatemala’s Pacific beaches, where from July to December, the olive ridley (Lepidochelys olivacea) comes ashore to lay eggs.

To raise awareness of this endangered species, the third annual Sea Turtle Festival will take place the weekend of Nov. 18-20 in Monterrico and nearby Hawaii. Events include lectures, workshops and activities for children, hatchling releases and nightly patrols in search of nesting females. All proceeds support area turtle hatcheries, which buy turtle eggs from local villagers–who would otherwise eat them–to nurture and release.

Other highlights include activities such as a beauty pageant, volleyball and beach soccer tournaments, a horse parade, and the area’s first surf competition. Live music, disco and marimba provide nightly entertainment in both towns.

The population of sea turtles nesting in Guatemala is unknown, but the odds are against the reptiles as only about one out of every 1,000 sea turtle hatchlings survives to reproduce. The vast majority of eggs are lost to human harvesting and consumption; destruction of nesting habitat also contributes greatly to the species’ decline.

Guatemala is one of the last bastions of turtle egg commercialization, having been outlawed in most countries of the world. Here the government permits the sale of turtle eggs, provided that 20 percent of the nest gets donated to a local hatchery. This system has been established as a compromise, allowing people to continue to do what they have done for generations while attempting to keep turtles from disappearing.

Monterrico, one of the earliest destinations on the coast to use tourism to promote and protect sea turtles, became the home of the first sea turtle festival. Grupo Gestor, a consortium for coastal development, recognized ecotourism as a solution to their problems of sustainability and lack of jobs and education; the group developed the annual festival three years ago.

Leading up to this year’s event, Hermanos de las Olas, the surf NGO putting on the surf tournament, has been offering three-day surf clinics in Hawaii, the final set for Nov. 11-13. Call Edgar Guillen at 5316-4637 for details and reservations.

Hotel reservations are highly recommended for the festival weekend, as it is projected to sell out. La Antigua Guatemala transport services provides daily shuttles to Monterrico and there are connecting buses to Hawaii. There are also direct camionetas from Guatemala City and Antigua departing daily.