Pitayas are one of the climbing cactaceas, named after its habit to use trees as a physical support. Pitaya (pitahaya) is a night-blooming epiphytic cactus, which is common throughout Guatemala and surrounding countries. Many hotels in La Antigua Guatemala and around Lake Atitlán, El Remate and Tikal have pitaya and/or their relatives blooming over the summer. For example, hundreds of pitaya are in the ethnobotanical garden at the Hotel La Casa de Don David in El Remate. 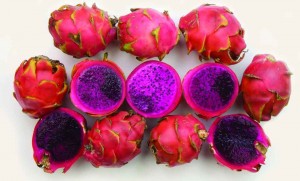 Pitaya produces a spectacular flower with an alluring fragrance and a fruit whose outside color is exceeded only by the absolutely unexpected symphony of pink and magenta color inside. The flowers are mainly nocturnal; they open late in the day, when there is almost no sunlight, and remain open for the night, until the next morning when they close. There are two varieties of flower; they can be a gorgeous full white bloom or an incredible dark red.

I am sure that scores of gardens at the altitude of Guatemala City may be filled with successful pitaya, but not a single solitary one of my transplanted cuttings have grown more than a few centimeters in four years. Not all have died, just they stagnate.

Pitaya is raised and eaten around the world. It grows readily in tropical climates and is one of many plants that FLAAR Reports recommends for home gardens. It has high protein, phosphorus and potassium values; these nutrients are used to prevent disorders in the nerve and cardiac system, also in the muscle structure. The pulp of the species Hylocereus undatus is used as a laxative and for treatment of renal stones. Also, the seeds produce a compound called captina, which is used as a cardiac tonic.

Generally, the edible part has been the fruit itself; however, the small cut stems have recently been used in various dishes. The fruit can be eaten by itself or it can be prepared in drinks. The stems are used insoups, salads, stews and deserts. The pulp is also used to flavor jellies and ice cream.

For additional reading on flowers and fragrance from dusk to dawn, I recommend The Evening Garden by Peter Loewer. 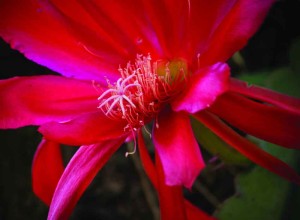 The FLAAR director, staff botanists and our capable photography team are interested in working together with NGOs and village groups to raise funds to improve awareness of all the diverse ranges of native traditional plants.