You say Granada, I say Enchilada…

Especially the chicken molé-drenched version from Tequila Vallarta on Calle El Calmito east of the Parque Central, swimming in several different layers of chocolate and spiced with just enough molé sauce to require one of their delicious margaritas to cool your tongue.

Yes, the owners really are from Puerto Vallarta and on Sunday evenings, as the weekenders from Managua pass by in their shiny SUV’s, sitting at a table on the sidewalk in Granada, Nicaragua is a very good place to be. It will still be warm and humid from the earlier heat of the day but that’s why we have margaritas. The tourists walk by, ducking into the doors of the three- block-long stretch of restaurants, glance at the menu board and look around to see what’s on the nearest plate.

The margarita is perfect and frosty. A visit to Granada is well worth staying a day or two or more: the easiest way to go is to fly either COPA or TACA, you’re less than an hour away from Guatemala City. Take a USD $5 dollar bill to pay for the right to enter Nicaragua, and there will be taxis outside. If you book a room in most of the better hotels in Granada, they will arrange to have a car and driver waiting for you: it is usually a $35 ride, past the dusty streets of eastern Managua and out into the green-and-brown fields of the countryside. The road is good, and it usually takes 30 minutes to reach Granada.

A bit of history: Granada is the oldest city in Central America, founded in 1524 by Francisco Fernández de Córdoba. Time has not been kind to the “Great Sultan,” named in honor of its Moorish namesake in Spain. The city has suffered the slings and arrows of fortune, ranging from devastating earthquakes to the likes of that infamous pirate Henry Morgan, who sacked the town in June 1665. The last of the external pirates was invited by Granada’s traditional rival, the city of León, who imported William Walker from New Orleans with his band of mercenaries known as “the Immortals.”

He and his band of merry fellows defeated the city in 1850; he declared himself president and then launched a failed conquest of the rest of Central America. Twice. The second time he was captured and shot by a firing squad (in Trujillo, Honduras)—a lesson to some of us in the case of being called an immortal.

What is there to do in Granada? The central park is surrounded by beautiful colonial buildings, restored to hotels or Spanish schools. The big yellow building on the corner is the Italian Embassy. Horse-drawn carriages of various bright colors wait listlessly in the noonday sun, waiting for the slow tour of the city to begin. Arts and craft vendors line the outer edges of the park, and some very good embroidery can be found. Two of my favorite panamas now sport Granada-woven hatbands ($30 and a day to produce). There are a few museums, a few art galleries and several magnificent churches to visit. There is a new chocolate store on the south side of the park with enticing displays. There are local and city tours, lake tours (Lake Nicaragua) and the islands thereof, canopy tours of Volcán Mombacho and beautiful countryside to explore. Masaya, nearby, has a large marketplace of craftwork, ranging from woodwork to embroidery. When it gets to be too much, there is always Roxanne’s Massage on Calle El Calmito, up the street from Tequila Vallarta.

Don’t feel like another night of Mexican food? Try Jimmy Three Fingers BBQ on Calle Consulado, east of El Parque Central: The fish, chicken and beef are excellent and inexpensive. When Jimmy isn’t cooking, you’ll find him at the bar holding court, poking holes in the filter of his cigarette with a paper clip. “I’m trying to quit: I promised my Mom I’d quit after the first of the year.” He is a character, as are most of the ex-pats in Granada. For breakfast, it is practically mandatory to stop in at Kathies Waffle House, two blocks northwest of Parque Central, on the corner of Calle El Arsenal. The #24 on the menu is three eggs (anyway you like and done to perfection), four strips of bacon, hash browns and a big slice of freshly baked, whole-wheat bread.

Granada is a walking town. Take sturdy shoes and avoid the pitfalls and the occasional open holes in the sidewalks. Banks are close by for ATMs, and there are money-changers in the vicinity. Choose a hotel with a swimming pool, if possible. The days can get a bit warm when the breezes from the lake aren’t wafting through the trees. Relax: Granada is a smaller version of La Antigua Guatemala but with Lake Nicaragua at its doorstep. 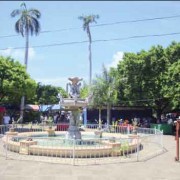 Fountain at the main square

Granada’s Cathedral at the central park

Part of the central park with game booths

The Italian Embassy in Granada