You Can Get There From Here “Surprise followed surprise in bewildering succession… Suddenly we found ourselves standing in front of the ruins of two of the finest and most interesting structures in ancient America. Made of beautiful white granite, the walls contained blocks of Cyclopean size higher than a man. The sight held me spellbound…The building did not look as though it ever had a roof…so the sun could be welcomed here by priests and mummies. I could scarcely believe my senses…Would anyone believe what I had found?”

The place now known as Machu Picchu had rested undisturbed for three centuries when Hiram Bingham recorded his discoveries in July 1911 (Lost City of the Incas). Today one of the world’s wonders, Machu Picchu welcomes half a million visitors a year.

Machu Picchu is not exactly in the neighborhood of Guatemala. But when one has come this far, it’s a logical link, historically speaking. In 1533 when the Spanish conquered the ancient Inca capital of Cuzco, Peru, the jumping off point for a Machu Picchu visit, they were also building their own capital in Almolonga, Guatemala, on the skirts of Volcano Agua. Three years later the Inca king slipped out from under Spanish domination, packed up his people’s golden treasures and left Cuzco to relocate the royal seat in the remote, fortified mountain sanctuary of his ancestors.

The Spanish succeeded in forcing the Inca from the royal hide-out in 1572 and displayed the king’s head on a pole on the plaza of Cuzco. By that time Almolonga had been destroyed by a furious flood, and the Guatemala contingent was busy building Santiago de los Caballeros, now La Antigua. Spanish King Charles V had had enough and abdicated in 1556, turning the whole thing over to Philip II who never looked back.

The citadel of the last Inca was of no matter, its secret existence buried safely under the shadow of Machu Picchu and blankets of vegetation until historical and geographical curiosity reawakened in the 1800s. “The sanctuary was lost for centuries because this ridge is in the most inaccessible corner of the most inaccessible section of the central Andes,” wrote Bingham. When discovered the ruins took the name of the mountain “because no one knew what else to call them.”

Inca civilization has generally been defined by what the Spanish found, but probably dates back thousands of years, the empire to around 1200. But by the time the Spanish arrived it had passed its prime, weakened by civil war. Its history has been shrouded in mystery, partly due to lack of a written record. It seems writing had long since been banned based on the belief that letters caused pestilence. Augustinian monks managed to reach the vicinity of the royal retreat and tried in vain to persuade the Inca to accept Christianity. Their writings fill in some gaps about the last days of the empire.

What cannot be denied is that the ancient Inca were excellent engineers. They built roads through the Andes from Ecuador to Argentina and Chile, bridges of braided vine over mile-deep gorges, amazing agricultural terraces and phenomenal water systems. Bingham returned for fur-

ther explorations in 1912 and 1914-15, sponsored by Yale University and National Geographic Society, painstakingly removing obstacle after obstacle. Still a puzzle, more recent discoveries tell more about the end than the beginning.

Today’s traveler from Guatemala typically flies to Lima, about six hours, and then another hour and a half to Cuzco on an early morning flight. The altitude of 11,000 feet might call for adjustment, overnight rest and lots of coca tea. No problem there: Cuzco itself begs exploration, its narrow ancient Inca lanes laced with Spanish influence, its architecture, plazas and convents, its culture spoken through crafts and a brewery, the modern version of an ancient custom and, along with tourism, Cuzco’s main industry.
The three-hour train trip from Cuzco to Machu Picchu departs from stations about half an hour from the town.

The trip ends at the town of Machu Picchu, near Aguas Calientes, at the foot of the mountain. From there buses run every 15 minutes, climbing round and round straight up (it seems) to the top and there the entrance to the sanctuary, where the altitude is only 7,000 feet. After a guided tour of several hours or all day, visitors zig-zag down the mountain for the night or the return train to Cuzco.

Hardy hikers trek, instead, for three or four days, through some of the world’s most beautiful scenery.

Both tracks and trails pass a constantly changing panorama, majestic precipices rising thousands of feet, luxuriant foliage, snow-capped peaks, rugged mountains and rushing river rapids, so close to simple farms and pastoral terraces it seems one could reach out and touch them. Bingham was right: the word is ‘indescribable.’

Nor do words do justice to the magnificent sanctuary itself. Terraces with irrigation ditches and grazing llama, stairways carved out of rock, temples, astronomical research sites. This was a place for the royal family and those who served it, who opened their hands and threw kisses to honor the sun.

Peruvians have done a first-class job of packaging their product and orchestrating the implementation for virtually every level of travel. Trains range from backpacker to deluxe-all-the-way on the Hiram Bingham Orient Express Train, with polished wood,

live music and an open-air caboose club car. Accommodations include tents for hikers and five-star hotels, among them one built on the old Dominican monastery in Cuzco, originally site of an Inca palace, and Sanctuary Lodge at the entrance to the ruins (the only way to overnight at the top)—and everything in-between.

Best time to visit is now, the dry season, between May and November. To avoid disappointment, planning ahead is necessary, especially purchase of train tickets. Researching the Peruvian websites is time well spent.

Whatever the preference or the budget, Machu Picchu promises an unforgettable and haunting experience. 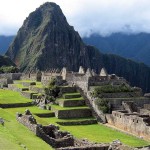 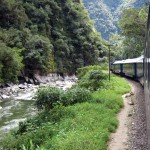 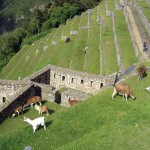 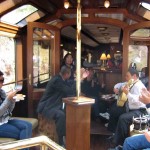 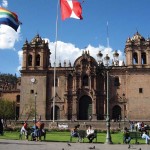 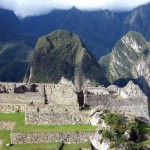 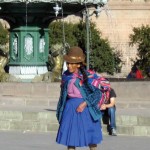