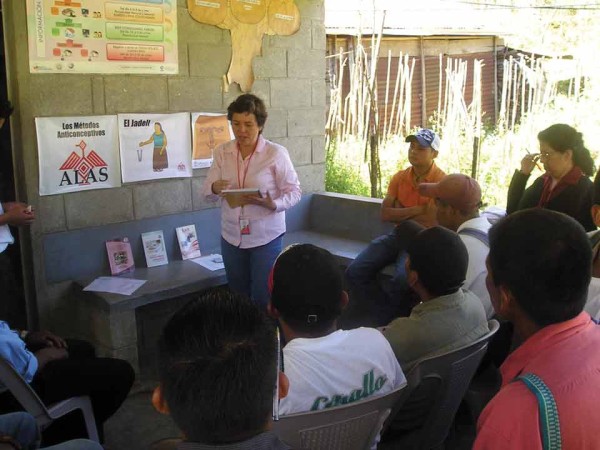 The new program is launched in Alta Verapaz

The statistics regarding family planning and gender equality in Guatemala are astounding. According to Janeen Simon, executive director of WINGS, the country ranks third in Central America for the highest birth rates in adolescent girls between the ages of 15 and 19. The poorest 20 percent of women in Guatemala have an average of six children each; the world average is 2.5.

With 114 births per 1,000 women between 15 and 19, Guatemala is ranked seventh highest in the world for chronic malnutrition in children under the age of 5. Cervical cancer patients and deaths in Guatemalan women are expected to double by 2025. And in a country where cultural and religious attitudes favor men, gender equality is almost non-existent. Ranked 116 out of 135 countries in gender equality, Guatemala trails behind 85 percent of all other countries in the world in equal rights for women.

WINGS was established in 2001 as an advocate for reproductive health and gender equality. Founded by Sue Patterson, a retired U.S. Foreign Service officer, WINGS provides reproductive health services such as short- and long-term birth control options, cervical cancer screenings and educational outreach to communities in rural and urban Guatemala.

Janeen Simon has been a part of the team since 2008, when she left Mercy Corps. In her almost 30 years in Guatemala, she has witnessed first-hand the toll that a runaway birth rate has on a country with limited resources. Simon’s years at Mercy Corps solidified her belief that reproductive health was the answer to mitigating social problems such as chronic malnourishment, human rights, environmental degradation and education on an already over-burdened population.

Simon has overseen WINGS during a period of rapid expansion and growth, and as of early 2012, its programs were stretched to the farthest departments in Guatemala.

Up until that time, the WINGS model had five programs—the men’s program, the youth program, the family planning, cervical cancer screenings and advocacy. These programs were designed to be taught together, to be complementary. But as the organization responded to needs of local communities, which perhaps only had interest in one or two programs, Simon and her team felt the WINGS message was being diluted and, therefore, becoming less effective, especially in areas where all the programs were not utilized.

Simon explained:
The problem with the five-pronged, spread out approach is that any given area, because of resources, only received one or two programs. If a community had a youth program that was working, kids would start to ask for birth control methods. But parents and community leaders wouldn’t support them, because there wasn’t that advocacy program educating the community at large about why family planning is important.

Last year, WINGS saw an opportunity to restructure in order to more effectively and concisely communicate its information. To do this, WINGS revamped its model by concentrating its efforts in one area, rather than attempting to reach all areas of Guatemala. Continuing to provide support to its programs in other Guatemalan departments, WINGS began to look for areas where it didn’t have a presence.

When looking for a new area in which to grow, Simon stated, “We decided we would implement [this model] in one department and we wanted it to be an area where we hadn’t worked before. We looked at five to six key factors that are important for reproductive health… and we narrowed it down to a few different departments that have the worst [statistics] for those indicators. Alta Verapaz was one of them. Over four or five months, we put together this model, found an office space, hired people and opened in January 2013. We trained all the staff in January and February and started implementing programs in the field in March.”

Now the way WINGS distributes its information and services is radically simplified. The new program, deemed the Reproductive Health Integrated Model, has just two components—training and development and direct service.

Training and development reaches out to community leaders, teachers, youth and elected leaders as well as individuals and offers trainings and forums on everything from reproductive health and family planning for men and women, gender equality and cervical cancer awareness. The direct service wing offers the distribution of temporary methods such as condoms, injections and oral contraception through a network of volunteer community promoters, and sub-dermal implants, IUDs and cervical cancer screenings delivered through its mobile health clinic. One-on-one counseling, referrals and subsidies for permanent family planning methods are given as well.

Simon and the WINGS organization feel the new model, with its more holistic and cohesive approach, as well as the concentrated effort in Alta Verapaz, has been a huge success. “We wanted to see how it worked if we saturated an area, saturated a community,” she said. “It’s kind of mind-boggling how quickly we pulled it all together but what’s exciting is the acceptance we found up there and we’ve already surpassed some of our goals.

I think we’re really breaking down some of the barriers.” 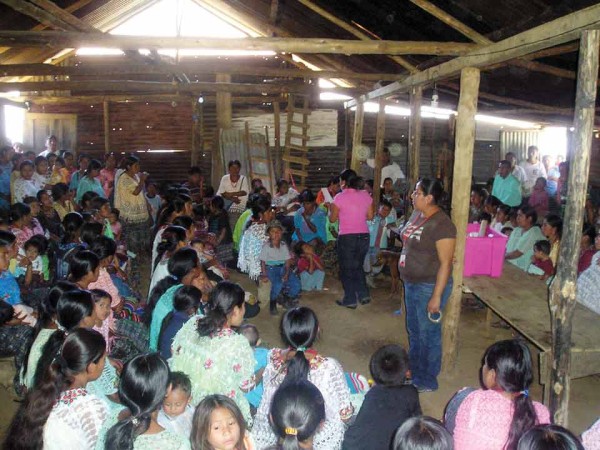 WINGS staff speak to women about family planning during a reproductive health charla in Alta Verapaz.