I’d like to blame the altitude; I don’t think I’ve ever wheezed so much in my life as I did on my recent trek in the Western Guatemalan mountains. It’s not as if I was trailing behind the group —I usually kept up quite well. And when I was trailing, it was because my film-crew partner and I were trying to pack up the tripod as the group ascended. Maybe it was the extra weight, the camera and gear that had me wheezing. 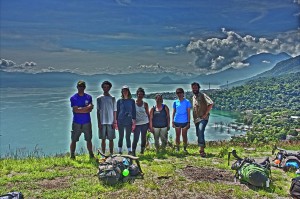 Text and photos by Robin Canfield

It all started with a bus ride from Quetzaltenango to the city of Xecam, where we set out on the trail.

Well, no. That’s not right. My crew was there to make a movie, a documentary. It all started with a lot of research, deliberation and planning. That’s what got us to Xecam and on the trail with the guides from Quetzaltrekkers and other hikers.

From the middle of Xecam we simply started uphill and kept going until the town was lost to sight behind us, down the mountain and around a bend in the path. We moved along a small, grassy road that shrank to a thin trail, then shrank again as we moved on into the trees.

For three days my group followed in the aging tracks of guerillas to get across the mountains and through tiny villages, led by a Quetzaltrekker guide who had memorized every stop, every fork in the trail.

I am the type of person who, back home, can be driving down the highway, glance at a string of mountains beside the highway and pick out one that looks perfect, that makes me think “it would be fun to pull over and climb to the top of that right now.” From chicken buses and microbuses, though, I never had a good chance to glance at the mountain tops en route to Quetzaltenango. I was perpetually bracing myself for corners rather than enjoying the view. 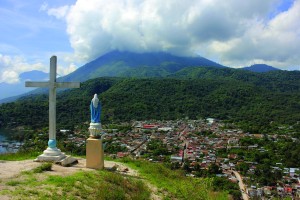 left: The hiking troupe relaxes for a photo op above: San Juan la Laguna below: Pre-dawn at Lake Atitlán

So it was that I never suspected that I would find myself climbing these towering mountains, nor did I ever expect that as I started along a trail I would know that the villagers on our route had once upon a time raised their machetes in fear at the sight of approaching hikers who arrived too close on the heels of guerillas soon after the armistice.

Thankfully, no hands or weapons were raised against my group on our hike—it certainly seems like an occurrence of the past, as sometimes not even an interested eye turned our way. For the most part locals in the mountains, in Santa Catarina Ixtahuacán and Xiprián, as well as other spots along the way that don’t appear on most maps, were friendly passers-by, willing (sometimes for a fee) to be photography subjects. Every person was a point of interest.

The greatest battle on this trek was the hike itself, mainly inclines and descents that are not to be scoffed at nor ignored. With a full pack on your back the slopes will quickly wear down your strength and your will, and that’s just on Day 1. Luckily, every thin path, every rutted trail and every road led to new adventure, new excitement, and some of the most breathtaking views I have ever seen in my life that often ebbed and flowed with the ever-changing clouds.

At the outset of Day 3, as we marched from Xiprián in the pre-dawn hours, passing local farmers beside the road in the dark, I was too tired and too busy to wonder if it was all worth it as I darted up and down the line with the video camera. A short time later we were perched on a mirador over Lake Atitlán waiting for the sun, and I knew it was worth it. I was far more excited to have come that far than to be so close to the end. As the group relaxed and took in a fantastic sunrise over the lake, watching the clouds ripple below us, I knew I would happily do it all over again—just without the extra weight of the tripod and camera gear.

Besides, now that movie has already been made. You can see parts of the hike and find out why the Quetzaltrekkers do what they do in Why We Hike—at whywehike.actualitymedia.org. And if you are near Quetzaltenango yearning to take an adventurous hike, find the Quetzaltrekkers!