What Will I Do with the Gold? 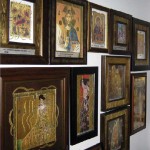 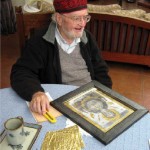 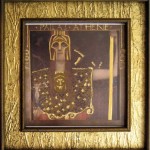 “My name is Thompson because da Vinci was already taken,” Al quips in his typical, quick humor. In fact, there are similarities between the 15th century artist and Al Thompson, born in 1928. Both justly claim a diversity of talents: painting, sculpting, inventing, writing, to name a few. An exhibition of Al’s most recent creations opens December 3 at el attico, 4a. Av. 15-45, zona 14, Guatemala City. He calls his art form ‘sculpting the print’.

It all began about 20 years ago when archaeologist and La Antigua Guatemala resident Ed Shook recognized the artist in teacher/educator Al Thompson and offered to sell him six ‘books’ of 24Kt gold leaf on tissue paper pages. That sounded interesting, so “Sure, why not?” thought Al. He bought the little books, about five inches square, stamped Made in Germany, then forgot about them for years while he painted with oils, cultivated coffee, devised equipment with which to process it and wrote books. Eventually, there they were again.

“What will I do with the gold?” he asked Antigua friend Barbara Leaver. Barbara remembered seeing the work of Gustav Klimt in Austria and brought Al a book of prints. Early in the 20th century Klimt, recognized as Vienna’s greatest painter, used gold to bring life and energy into his Byzantine-inspired mosaic style paintings. “The problem with prints is that they’re inert compared to originals,” Al and his friends agreed. He played with ideas of how to re-energize the prints with gold. “Living in Guatemala is marvelous. If I get a yen to do something, there’s not a pile of peers to question it. No one said, ‘Don’t do that! Why are you wasting that gold!’ ”

The first challenge was how to lift the fragile gold leaf from the tissue page without disintegrating or destroying it. “Gold leaf is 3/100,000 of an inch thick!” He figured out that he could slide the gold leaf onto waxed paper, then ve-e-e-r-y carefully, but also very quickly, pat onto it a layer of tissue paper brushed with white glue. To his delight he discovered that this not only stabilized the gold leaf, but it shriveled and shrunk into attractive texture. A second layer of tissue glued to the first secured the sheet.

Next, how to use the sheets of gold leaf. Paint with enamel? Use as background or mats? Enhance prints? Yes, yes and yes. He experimented with these and “all by accident” came up with the idea of “sculpting the print. Then I fiddled with the glass idea to float the print over gold background.”

In addition to Klimt works, “I googled icon,” he states proudly, and searched the web for non-copyrighted masterpieces and manuscripts from all over the world—Italy, Greece, Turkey—to print out and make copies. Then, with a razor knife, sensitive to the line and form intrinsic to the subject, he meticulously cut out the details to gild. “I laid the print on the glass first, because my wife doesn’t like me to cut through the table.”

Carolyn, Al’s wife and clearly valuable consultant, comments that Al is engrossed in his work before dawn. “He spends a lot of time just staring at the print, coming to the right interface between gold and picture.” Al agrees. “About three in the morning I see these pictures in my head and get ideas about how to make them come out, to actualize them.” Added adornments of flamboyant swirls and zigzag loops achieve just the right balance to enhance the subject.

The three-dimensional finished work of four-layers—gold leaf, glass, print, glass—breaches the barrier between illusion and reality. The gold background catches the light through the sculpting, and the print comes alive. “It’s a reincarnation! Then it gets even more exciting with a frame.” The final touch, the signature: A. Gray Thompson. Gray captained the ship on which Al’s great-grandparents sailed back and forth between Britain and Australia with supplies during gold rush days, perhaps planting Al’s history with gold.

Al developed useful skills in his previous hobbies of crafting jewelry, icons, nativity scenes and chess sets with silver. That ended, also by accident, when a priest friend slammed Al’s finger in a car door and, “I couldn’t hammer anymore.” Ever the optimist, Al only saw that as opportunity to move on. After retirement in Antigua in 1989, he started to paint with oils. “These were stepping stones,” he says, toward this latest achievement.

Like da Vinci and Klimt, Al Thompson comes from a simple background. Da Vinci’s mother was a peasant; Klimt’s father was a goldsmith, Al’s a welder. Also like Klimt, Al is good-natured and sociable but enjoys the solace of his studio. He’s a Fulbright scholar with a Ed.D. from Berkeley. Friends would argue his description as a ‘self-perceived failure’, but maybe that comes with the territory of genius. In Barbara Leaver’s words, ”Al has out-Klimted Klimt.”
The gold is almost all gone, now in the 26 framed works of the exhibit. There will not be more. Why? “Because I’ve finished this,” says Al. “I feel a sense of accomplishment.”

by Jack and Joy Houston