What system is used for property measurements in Guatemala? 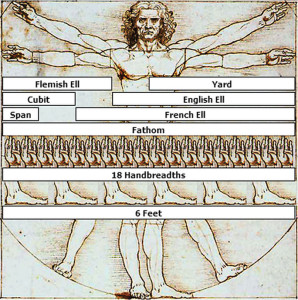 A common question I receive is about property measurements, probably expecting the short answer as whether we use feet (imperial system) or meters (metric system).

No easy answers here. When the Spanish came in 1524, European measurements were based on Marcus Vitruvius’ (80-70 BC—15 AD) “De Architectura,” known today as the “Ten Books of Architecture.” According to Vitruvius, architecture is an imitation of nature, which led him to defining his Vitruvian Man as drawn later by Leonardo da Vinci. The drawing and text are sometimes called the Canon of Proportions and is based on ideal human proportions.

The Spanish also used a similar system: a palm is four fingers, a foot is four palms, a cubit is six palms, four cubits make a man, a pace is four cubits, and a man is 24 palms. Other measurements include the length of the outspread arms is equal to the height of a man, the foot is one-seventh of the height of a man and so forth. A bit confusing perhaps as men are different sizes!

Varas were introduced in Mexico by Cortes in 1521 (before Alvarado came to Guatemala) as an official measurement, but regions in Spain used different sized varas. The first viceroy of Spanish America, Don Antonio de Mendoza, implemented the standard measurement of the Vara Castellana de Burgos (0.835905 meters) in the 1536 ordinance.

Thus, Antigua’s colonial architecture was all measured in varas and many properties are still measured that way today. A man’s long step is about a vara; the blocks located near the Central Park are 100 varas square. This system was implemented by all city councils throughout Guatemala. When a mayor is elected today he still receives the vara edilicia, which was the official measurement up until recently. Indeed, that vara (rod or staff) represents power, authority and justice for each city government.

The metric system was implemented by law in Spain in 1849 but was not adopted “officially” in Guatemala until 1910. This would have been in certain urban areas but not many other sectors of Guatemala, which were remote at that time. So today … urban properties may be measured in varas and/or meters; building/construction projects are measured in the metric system and, to confuse things even more, carpenters use the imperial system (inches). This is in urban areas; rural areas are a different story.