What is one of the biggest changes since 1969 in Antigua Guatemala? 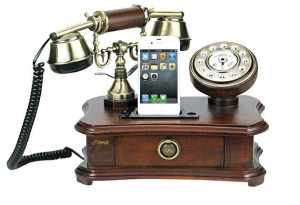 Phones. Yes, phones. Many visitors comment on how Antigua must have changed so much since I arrived in 1969. That was also the year that one of the first Spanish schools formally began (Proyecto Lingüístico Francisco Marroquín) and when the Protective Law for the Protection of La Antigua Guatemala was passed by the Guatemalan Congress.

In 1969, a few houses had three-digit phones—we rented a house because it had a phone, 406. There were only two ground lines out of town: The governor had priority No. 1 and the INGUAT office priority No. 2. If they were on the phone, we would have to either call inside Antigua or wait for one of them to hang up and try to get a line out—and that was to Guatemala City!

No amount of money would get anyone a new phone installed in Antigua in the 70s, 80s or the beginning of the 90s. In the 1990s, we began to get more digits —up from three to five—then seven!

In 1995, we were some of the very first people on the planet to get internet. With Guatemala’s mail service in shambles, it was a way to connect. After the 36-year civil war ended in 1996, we complained again to our friend, President Arzú, about the phone company. The Guatemalan government owned Guatel and we all hated the phone company. The president auctioned it off and it was transformed into a private company—Telgua.

Fundación Antigua began burying the phone/cable wires underground in Antigua with Telgua in the late 90s and had the vision of installing fiber optic lines. With cable TV, we could connect with the world after so many years of being so isolated.

By 2003, Guatemala had three million phone lines. And then telecommunications took off. Today’s numbers include more than 20 million phone lines for a national population of 15 million. In the last nine years, cell phones have increased 556%!

With Tigo (9 million+ lines) ahead of Claro (6 million+ lines), Movistar (4 million+ lines) and other companies, 95% of the cell phone market is with phone cards. Customers do not pay for incoming calls, so a few quetzales can keep a phone working to receive calls—making calls requires minutes known as a saldo. Telgua leads the market with 1 million+ ground lines, usually bundled with internet and cable TV. Since last year, we use Facebook as a news media. It was launched, last year, also in the Mayan language, Kakchikel. Telecommunications are 10% of the GNP.

Antigua remains a monumental city and we certainly focus on its architectural and historical beauty. In the 70s we were concerned about globalization mostly through movies out of Hollywood and how those would change the culture. With phones, a democratic process continues through abundant communication, so this remains one of the biggest changes — HUGE!