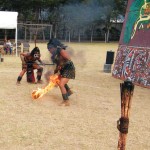 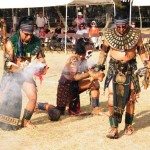 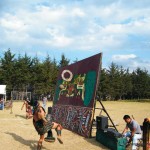 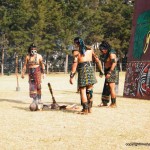 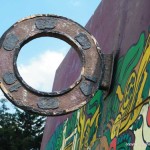 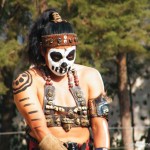 Chocoguatemaya (www.chocoguate-maya.org), in cooperation with the Ministry of Culture and Sports, arranged for a re-enactment of the ancient Maya ball game of pok-ta-pok, in connection with its mission of preserving the Mayan chocolate culture. Corinne Willock, founder, and José Caal, the vice president, were center stage.

Containers of copal incense were lit, prayers were said and torches blazed. Traditional Mayan music played from loudspeakers as the three painted and armored ball players came to the court. The black and white skull face was a reminder of the seriousness of this game. It was a serious pastime, a ritual and a vital part of the Mayan religion. It is considered the oldest sport of mankind, dating from 2500 B.C. The most ancient court (500 B.C.) found in Guatemala is at Nakbe, Petén.* Thus far 216 courts have been discovered in Guatemala, and some 1,500 have been found throughout Mesoamerica.

The size of the courts varied but they were usually 25 by 75 feet. Built mostly from stone (though with some of wood), with inward sloping walls, the rings were set approximately 27 feet high. The ball, made out of natural rubber, was usually 10-12 inches in diameter. The players, on teams of 2-11 players, could only use their hips, thighs and forearms, and wore thick padding (and lots of body and face paint). The ball is believed to have represented the sun or the moon, and the stone circle, the universe; with the court itself being the Earth.
Another version of the game was presented: the ball of fire. The players brought out painted clubs, the ball was soaked in fuel and then lit … whoosh! — field hockey the Mayan way and a lot more exciting.

Many warriors and kings played the game fiercely. Sometimes the losers lost their heads, which would be displayed later in front of the court.

The point system? Every time the ball went through the circle, two points were awarded to that team, two points were taken away from the losing side and the game ended at nine points. It’s been said that sometimes the game would go on for two to three days. It is and was a spectacle of clouds of incense, fire and fiercely painted warriors. It made the Super Bowl look like a Girl Scout jamboree.