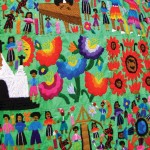 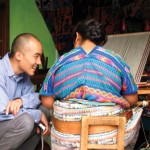 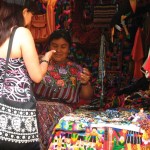 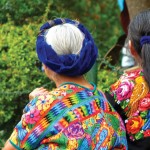 At the beginning of time, according to ancient Mayan legend, the gods from their center spun out the cosmos, setting in place the universe. The corn god laid out the four corners and erected the World Tree in the center, from whose branches grew one of everything to come. When they became too full, the ‘fruit’ fell, scattering seeds. The old tree then provided shelter for the new plants and nurtured them. The stump has continued to exist as the center of the world.

Creation and acts of the gods in making the world and regulating nature has been at the heart of Mayan thought and religion for 3,000 years. Mayan civilization flourished at the time of Christ in what is now Central America, building magnificent and colossal cities and temples. The Maya world view that survives in Guatemala’s indigenous culture looks back, contrary to the Western world view that looks to the future. For the Maya, the past sustains the present.

The weaving tradition expresses that past and the world view, full of symbolism which connects the Maya to all of creation. The Maya people center themselves in the cosmos and creation by the cloth they weave. The spindle is seen as the center, from which yarn is spun out. Myth has it that a Maya woman, led by a goddess, learned to weave by watching a spider weave a web. The back strap loom is seen as an aspect of the World Tree, the weaver feeding the loom to create. Wearing the traditional, woven costume (traje) is part of the backward focus—the importance of customs. The tradition of weaving continues in the traje, and so the Maya maintain their identity.

Girls learn to weave at age four or five. Women generally design their own blouses (huipiles) and spend several months weaving their creations. It is a costly process, both in time and money, and the huipil is worn for many years. Designs may be passed down from generation to generation, with styles unique in colors and designs particular to landscape, ceremonies and mythology of each Maya group. Yarn for the weavings is of locally grown and spun cotton or, in the colder climates of the highlands, fine wool.

The traje of an indigenous Maya woman identifies her ethnically and socially. Further information of civil status or position may be shown in the manner in which certain articles are worn.  For example, the way she wears the hair ribbon may tell whether she is married or single.

Earliest weavings used only geometric designs but then added fauna and flora. Textile motifs celebrate life, showing harmony with nature and the cosmos in symbols such as seeds, rays of the sun, phases of the moon, corn, volcanoes, birds and other animals, water jugs. Vivid colors of the weavings reflect the flowers that abound in Guatemala.

Much of the meaning of the symbolism has been lost or changed, making it difficult to research this significant aspect of Mayan clothing. And younger women, feeling more and more social freedom, choose colors and patterns according to preference rather than identity. Often huipiles are simply less expensive fabric blouses with machine embroidery. Also increasingly, there is the choice of modern Western clothes.

The weaving tradition is a dynamic art form with ties to the past. It is more than craft. Artisans have filled their weavings with memories of their people. It serves as an instrument of ethnic identity and has also become a major source of income, with tourists choosing table coverings, napkins, bags, pillows, bedspreads and more.

Remarkably, the Maya and their tradition have adapted and survived.

photos by Rudy A. Girón