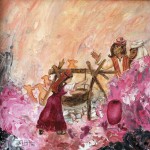 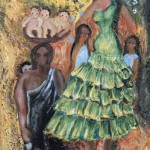 A host of Guatemalans, including four-footed ones, are glad that Ursula Baumann changed continents and careers in 1998.

She had been an able but often bored hotel manager in her native Switzerland. For decades she dreamt of making her avocation, painting, into a career. After retiring and moving to Guatemala, she indeed realized the vision, but the path took some surprising turns.

After settling into the artistic culture of San Pedro la Laguna, she was stricken with breast cancer and went to Guatemala’s National Cancer Institute for treatment. During her recovery there, she saw many who were in great need. She began painting, both cuadros and postcards and donating them to the hospital to sell in order to help impecunious patients offset their expenses.

Later, she would donate cards to AWARE, Guatemala’s no-kill animal shelter near Sumpango, to help that institution with its own costs.

“I have seven adopted dogs myself,” she says, “and I know something of their needs, at such a place.” All of the cards are originals, not replicas.

Baumann’s work is often exhibited at Panajachel’s La Galería, but this month a rare auction of her work takes place in downtown Pana. Nonbuyers are welcome, since the auction will double as an exhibit.