I reached for my cell phone to turn off the alarm: 12:30 a.m., time to get started. I lit the stove and put some water on for coffee. A few minutes later there was a knock on my camper’s back door announcng the arrivel of Josue, my trusted Kaqchikel guide. Josue was looking chipper and chomping at the bit to get going. I wanted my strong cup of Tarrales coffee because I needed fortification for the long slog ahead.

To get to the upper cloud forests on Atitlán Volcano’s southern flank would be a climb in elevation of more than 2,000 meters. Our purpose was to locate the rare unicorns, which, according to local lore, still survived, secluded in the upper elevation valleys that provide the cool, misty microclimate that they prefer.

Unicorns! One of the main reasons I came to Guatemala decades ago was to search for these mythical beasts. I usually avoid talking about it because most people dismiss the idea even quicker than they do talk of UFOs. Unicorns exist only in fairy tales, they say—but not for me!

I actually met an old farmer many years ago who lived in the mountains above Tecpán, in the Department of Chimaltenango, who claimed to have trapped several unicorns for the infamous Dr. Estudio, a cryptozoologist and trafficker in rare species from Mexico City. In the ‘80s we spent many weeks searching all over the Sierra de Tecpán with no positive results.

It would seem the unicorns had become extinct … if indeed they had ever existed there. We had no proof, and proof was what we were looking for. That is what brought me in the spring of 2011 to Atitlán Volcano, a 4,000-meter high cone rising at the edge of Lake Atitlán.

Finally, Andy arrived at my camper and we all sipped coffee and chomped down on some delicious buttery champurada cookies, which his wife had baked for our trek. Andy, the owner of the Tarrales Coffee Plantation where I was camped, volunteered to be my Sherpa and carry my “heavy artillery”—the lenses and tripod I would need to photograph the elusive unicorn.

By 1:30 a.m. we were slowly making our way up a deeply rutted track in a ramshackle old pickup. The “road” wound up through the transitional forest known as the Boca Costa. This is a unique floristic region between the Pacific coastal tropical rain forest and the upper elevation cloud forests. The trees were all festooned with multitudinous lianas and epiphytes. The humming of insects resounded all around. Occasionally the moonlight would break through the dense canopy and shimmer down upon the exuberant foliage. An hour later we arrived at the little Mayan outpost of Albores, the highest inhabited place on the volcano.

On with our backpacks, walking sticks in our hands, headlamps blazing, we began our ascent. Hour after exhausting hour we continued up a narrow, muddy path. Finally, the warm glow of dawn began to welcome the new day; in the distance we could hear the roar of a troop of howler monkeys.

We couldn’t have wanted a more beautiful morning. Cool, crisp, sunny and clear. Josue busied himself getting a little fire ready. Soon we were warming ourselves around the blaze, toasting our yellow corn cakes and dipping them into a pot of delicious black bean stew. The sustaining repast was washed down with sweet coffee along with our delicious, saucer-sized champuradas.

Thus fortified with the sun warming the forest, we began our final ascent up the steep, overgrown path, often chopping our way through with machetes. Along the way Josue again told us about his several encounters with los cachudos, the horned ones, as he called them.

Although I appraised Josue to be a very bright young man with exemplary bush knowledge, I had to consider his stories to be anecdotal and therefore somewhat suspect because he was neither a professional zoologist nor did he present any physical evidence to back up his claims. Nevertheless, his quite exact description of the coloration, size and behavior of his cachudos gave me considerable hope that he had indeed seen these mythical creatures.

For the next several hours we explored the cloud kingdom. These are the most ancient forests in the region. Less than one percent of all the forests in the American Hemisphere are cloud forests, but it is here where we find the highest concentrations of unique endemic species. We were following paths that appeared to have been made by tapir and white-tailed deer and we were excited to find large cat tracks—probably mountain lion but they also could have been made by the far-ranging jaguar. All these details indicated that we were beyond the reach of local hunters—no sign at all that man had ventured here.

Suddenly, Josue froze and put his finger to his lips to silence us. He cupped one ear and we all strained to hear what he was hearing. From the distance above came a weird echoing-booming sound, quite indescribable. Josue smiled and nodded. Adrenaline flooded my blood. We stalked forward slowly. I had my camera with a 500-millimeter lens mounted to a rifle stock at the ready as we crept through the underbrush. The booming became louder and seemed to be coming from all directions. An instant later we were gazing up into the branches of a huge, old mahogany and there, before our eyes, perched a real, live, flesh-and-blood unicorn! Oreophasis derbianus—the Horned Guan!

The strange, turkey-sized creature seemed to glare at us defiantly while making staccato clicking vocalizations. Then another big horned one appeared. They seemed quite fearless and I was able to shoot dozens of exposures. Then both of them began to make the weird booming noises again, but the strangest thing was that the vocalizations which we saw them making seemed to emanate from another tree!

It would seem that they had developed an ability to project their sounds similar to what a ventriloquist does, thus making it even more difficult to locate them. I had never seen or heard anything like this before. Simply incredible!

A moment later they both glided silently into the green sea beyond and they were gone. Try as we may during the next several hours we never got another glimpse of this rarest of creatures, but the expedition had been a resounding success. Exhausted and elated, we started back down to civilization.

The horned guan is without question one of the rarest and most unusual birds on Earth. Found only in isolated, wind-swept tropical cloud forests in Guatemala and Chiapas, Mexico, the horned guan is the Holy Grail for any serious birder. Compared to the horned guan, the resplendent quetzal is rather common.

A century ago these birds were already very rare and extremely difficult to find. They have suffered greatly from forest destruction and, being a turkey-like bird, from human depredation, many times ending up in a villager’s stew pot.

More than any other habitat on Earth, the cloud forests are in urgent need of better protection. And with the idea of contributing to cloud forest conservation we are organizing a new group called Defenders of the Cloud Forest (Defenores de la Nubliselva) whose purpose is to stimulate grass-roots support and participation in the defense of Mother Earth and especially her most unusual, most endangered places. 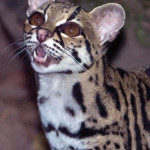 A skillful climber, the margay prefers the rainforests 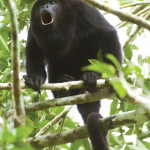 An adult howler monkey giving a shout out 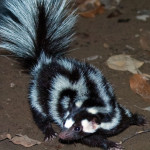 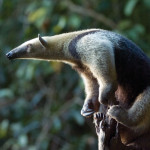 The tamandua is a nocturnal, arboreal anteater 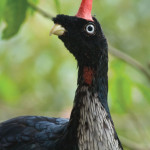 And there, before our eyes, perched a real, live, flesh-and-blood unicorn! 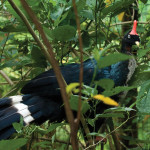 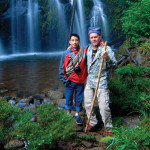 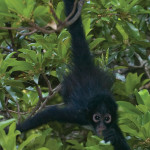