Traditional Guatemalan Food, what and when to them, Recipes included

Guatemala has an extraordinary culinary tradition as it brings together a mixture of Spanish and Maya cultures. Dishes are elaborated with complex recipes and ingredients — some are prepared days in advance.

Guatemalan cuisine has also its own protocol, some dishes are served only once a year, some others can’t miss a Sunday or a family party, and some are seasonal.

The tortilla is included in almost every meal.

Black beans are one of the most important Guatemalan meals. It is common to serve them during breakfast or dinner usually accompanied with eggs to your taste, fried plantains, homemade tomato sauce, cheese, tortillas or bread.

Black beans can be prepared, “Parados,” that is served preserving the whole grain or “Colados” blending the grain first and then frying them with onion and they can also be refried and reduced to your desired consistency, if that is the case now they are called “Frijoles Volteados.”

At 10:00 am and 4:00 pm, it is time for a coffee break in Guatemala. A good Guatemalan coffee is usually served along with traditional Guatemalan bread. There are two types of bread in Guatemala “pan desabrido” also called “pan francés” which is a variation of the baguette. It is made to be filled with ham, chicken, cheese, refried beans, etc., and the other is “pan dulce” a sweet type of bread made to be soaked in coffee.

During the weekend as coffee break Guatemalans enjoy “refacciones típicas” instead of coffee, you can have an “Atol” which is a traditional hot corn or masa based beverage, instead of bread, you can have some sweet “rellenitos,” (deep fried plantain puree, stuffed with sweet beans) or “chuchitos” (a small tamal steamed made). “Tostadas” (fried tortillas, with a refried beans or guacamole topping) are another great option to have as refacción.

Below: Photo by Cecilia Díaz

It is the most important meal of the day in Guatemala. Even if you are working, you have an hour or even two at noon to enjoy lunch. On Sundays, when nobody works, more elaborate meals can be prepared.

Sunday is a family day in Guatemala, after Mass the family gathers to enjoy lunch. Traditional Sunday Lunch includes dishes like, Churrasco, (similar to a Barbecue) Chiles rellenos, Enchiladas, and some other typical dishes.

Seafood is another great choice to enjoy on weekends, try dishes like “Tapado” “Ceviche” or “Mojarra Frita.”

Pepián, is an important Guatemalan dish, it is usually served in very special occasions, such as baptisms, first communions, anniversaries, etc. It is also the official dish served on Corpus Christi day.

Pepián has a very complex recipe, similar to Mexican Mole (both share many of the
ingredients) but Pepián is not sweet. It is a kind of stew, which can be prepared with chicken, pork or beef, it can even take all three meats at once, and if it is the case it is called “Pepián de 3 carnes.” It is served with rice and accompanied with tortillas or
“tayuyos” corn tamale filled with red refried beans.

Fiambre, recently declared as National Intangible Cultural Heritage by Guatemala’s government, is a complex dish, served only for “Día de los Santos”, November 1 and “Día de Muertos” on November 2. It is a cold dish that has a vegetables base with a sausages and meats topping. It also has cheeses and boiled eggs, all on a special vinaigrette prepared in advance.

Tamales and Ponche, are served on Christmas Eve and Holiday Season. However, tamales can also be served on special occasions.

Tamales are made of corn “masa” mixed with lard and “recado” (a sauce made of tomatoes peppers and onions) with a piece of protein in the center that can be from chicken, turkey or pork, they are steamed cooked wrapped in a banana leaf. They also have olives and capers.

Ponche is made with fruits such as pineapple, papaya, apples, coconut, and raisings, boiled with sugar, cinnamon and other spices. It is served as a hot beverage during the Holiday Season only. 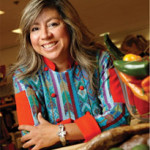