Theft! The tragedy at El Calvario and the paintings of Tomás de Merlo 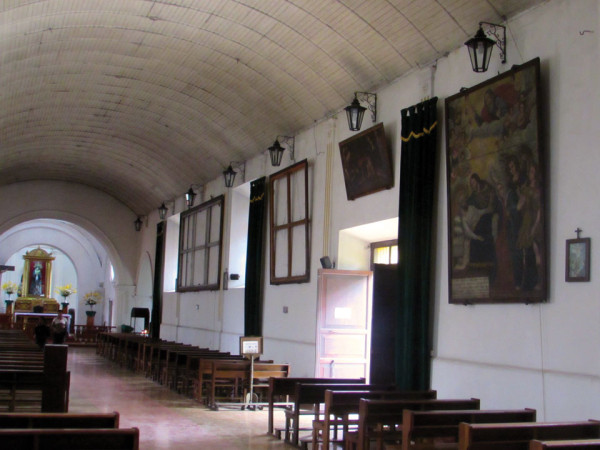 The white walls of El Calvario church in La Antigua are almost bare; virtually their only ornamentation is the skeletons of picture frames, appropriate, perhaps for the biblical Calvary but now only a stark reminder of the church’s former artistic glory. Unknown hoodlums absconded from El Calvario with six paintings by the 18th century colonial artist Tomás de Merlo on Feb. 7.

The art thieves arrived at the church late on a Friday as the sunlight was beginning to wane. Two of them tied up the church’s groundskeeper, Feliciano Chavez. They then entered the church and, using ladders, cut the paintings from their frames one by one.

“There are two main problems in Guatemala with our cultural history. First, it’s very valuable and it’s very vast,” Miguel F. Torres, academic fellow of the Guatemalan Academy of Geography and History, said. Second, “The colonial art was dedicated for the church—it was done for the church—and for that reason it is kept in the church,” where security precautions, and the necessary resources for them, are often lacking.

While the stolen de Merlo paintings are conservatively valued at around $300,000 each, Torres, an expert who organized the restoration of the paintings, said this number is “ridiculous” and could be much higher because “the paintings are also a part of our history.”

The six paintings are part of a cycle depicting the Passion of the Christ. El Tesoro de El Calvario, a book on the art history of El Calvario edited by Torres, describes the effect the paintings would have had when they were new: “After having made the pious journey along the Street of the Steps, meditating on each of the Stations of the Cross, residents of 18th century Santiago [de los Caballeros] de Guatemala, now La Antigua Guatemala, would be able to cross the threshold of the El Calvario chapel, where they were greeted by a pictorial series charged with expressive force and dynamism that, besides complementing and confirming the mental images arising from their profoundly religious spirit along the way, elevated their piety to a point where it was possible to enter into intimate contact with the supernatural.”

Even now, at least before their theft, de Merlo’s paintings made it clear that entering El Calvario represented the beginning of a spiritual moment. The paintings were also a highly visual, visceral tie between modern Guatemala and a distant colonial history.

De Merlo, the son of a painter, was born in 1694 near Santiago de Guatemala and became famous for his portraits and his religious art. The most prominent example of his portraiture is a seated depiction of Pope Benedict XIII from approximately 1724. De Merlo’s most important religious art is arguably the cycle from El Calvario. The cycle in El Calvario was commissioned to replace a series of paintings of the Passion by Antonio de Montúfar y Vivar Quiñónez, which were destroyed by the San Miguel earthquakes in 1717.

The commission for the paintings made the goal of the series clear: “Señor Doctor Don Joseph Suncin de Herrera … led by affection and devotion for what has been and is the Passion and death of Our Lord Jesus Christ, with Christian zeal, determined that in the church of the Sacred Calvary should be placed a painted history so that the faithful may possess a representation that is not only as alive as before but might also move the flame of the fire of divine love in their hearts and that it should incite a greater devotion than pious contemplation would bring about before the paintings were lost.”

Not surprisingly, de Merlo occupies a special place within the world of Guatemalan art history. Art historian Guillermo Monsanto told Prensa Libre that the thieves “stole the heart of Baroque Guatemala.” Oscar Mora, general director of cultural and natural patrimony at the Guatemalan Ministry of Culture and Sports, said the theft “not only damaged the cultural patrimony, but also broke the inheritance.” UNESCO likewise repudiated the crime.

Interpol has been alerted, as have major art auction houses and collectors worldwide. Anyone with information about the paintings should call the authorities at 2239-2100. 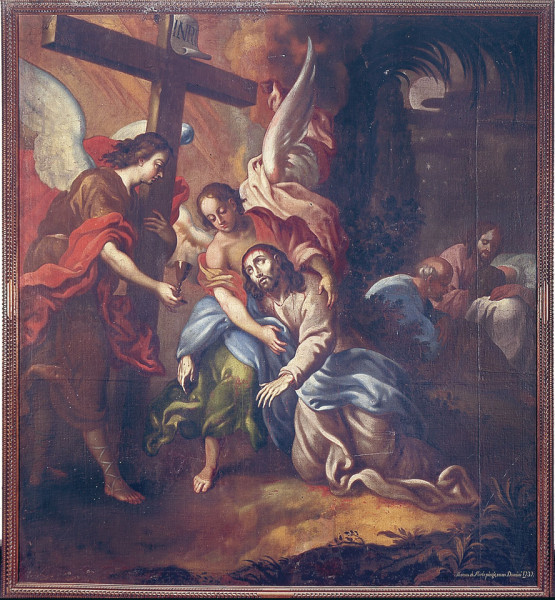 One of the paintings that was stolen: “La oración en el Huerto” by Tomás de Merlo, 1737 (photo courtesy of miguel f. torres)