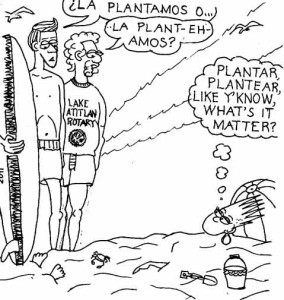 One day in about 1991, I was at some government ministerio doing paperwork; I forget what. Somebody on the 12th floor directed me to the primera planta near the elevator. There I would find the office I needed, to pick up a signature, pay a fee, or whatever; again, I forget that part. But I do recall walking down the hall, past alternating doors and potted plants (facing bay windows) toward the elevator. I stopped at the last plant and turned into the nearest office.

Oddly, the receptionist had no idea what I needed. As so often happens to language-challenged foreigners, I had entered The Twilight Zen!

Everywhere, save at a florist shop, primera planta (or planta baja) indicates the ground floor. And indeed, I later found what I was seeking on the first floor, near the elevator.

In addition to such things as this, la planta covers both kinds of plants in English: botanical and industrial.

The first example of the latter, in my childhood reckoning, was the titanium plant in Henderson, Nevada. This metal refinery bore little resemblance to, say, a daffodil, but both are plants or plantas, because both are planted in dirt. So it is that in both tongues “plants” give us everything from saffron to microchips (to say nothing of confusion).

Planta has more meanings than plant; it may refer not only to titanium plants but to their floor plans or blueprints. Our word plan may be a truncation of this; more on planning later.

Plant is also a name or, potentially, a nickname. A Tracy Plant Farrington at Guatemala’s Union Church could as well be Tracy “Plant” Farrington because, one year at the Christmas bazaar, she supplied myrrh plants.

But I am more concerned with the confusable verbs, plantar and plantear. They share an etymology that is “rooted” in the Latin plantare (to fix in place, to propagate from clippings, to transplant).

Plantar and sembrar are verbs for the sowing of narcisos (daffodils), and for sowing in general. They work for any kind of botanic germination I can think of except for sprouting alfalfa or fenugreek in a jar, which calls for something like empapar (to drench, soak). For real planting, you need dirt.

Plantear, the other verb, must have been coined when a scribe with excessive earwax, centuries ago, began saying to his associates, “plant-eh?-ar.” Plain old plantar was overworked, so they started using plantear for stuff that was like planting, but not in soil.

Hence, plantear often approximates poner and could be used when we discuss sowing things, not in soil, but in minds, conversations, constitutions and even chat rooms. Fifth columns, dissent and surveillance cameras are all cosas planteadas (whereas daffodils are merely plantados). But the commonest meaning for plantear is to propose (proponer and sugerir also work for this).

Maybe it was “Plant” Farrington herself who planteó the novel idea of selling all three nativity gifts at the Christmas bazaar: potted myrrhs, incense and “gold” chocolate coins. Kisses, like daffodils, can also be planted using this verb: vi a Arafat plantando besos en la cara de tu mamá (I saw Arafat planting kisses on your mom).

What follows are zenny exceptions to each verb, sort of.

To stand someone up is dejarlo plantado. Your friend’s mom probably stood Arafat up for the second date (the first having been blind), but she did not pot him in soil. Or she did show up, but only to plantar un golpe (bop/kick/bruise) in return for the kiss. So here is a figurative instance of plantar.

And if you say you are going to plant your property with macadamias or myrrhs, it is plantar, not plantear you use, although soil is involved. The reasoning might be that property, not plants, is the verb’s object.

That all said, I am still seeking a handle on the noun planteamiento. Diccionario Vásquez defines it as (1) an exposition; (2) the raising or posing of a problem; or (3) the laying out, layout, setting out, or focus on a problem. Whew. Maybe I will wait until the next time I hear this word, and ask what is referred to.

Yet planteamiento might be to planificación (planning) what plantear is to plantar. Planificación is what the architects of Belmopán, the capital of Belize, did prior to breaking ground. It is also la palabra indicada for family planning.

Speaking of planning, I am limited, as always, to 750 words. Reader, te planteo un adios.

Sixty Zen columns now form a unique book, The Zen of Pues, useful to Spanish scholars at all levels. Visit www.ideaquestbooks.com; also available in bookstores throughout Guatemala. Tel: 7762-2022 or sales@ideaquestbooks.com

Category: Language, The Zen of... Tags: Plantar, Plantear, The Zen of Plant(e)ar