The Zen of Hot and Cold 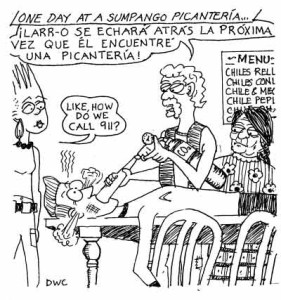 If you think hotness and coldness in Spanish are zenny, imagine how they look to students of English.

I once indexed the senses of hot when applied to autocars: hot to the touch, hot to sit in, hot in the temp gauge, hot to look at, hot to drive, or hot meaning stolen. With six meanings, English teachers could ask their classes, “Are we having zen yet?” Caliente suffices only for the first two. The respective right words for the rest are logical: sobrecalentado, bonito, estimulante, robado.

The general noun for heat and hotness, the kind we measure with thermometers, is el calor. Two more letters (-ia) gives us caloría (calorie)—a unit of heat (not of grasa, fat).

Coldness in English is zenny, too. Why, for instance, can cash be cold? And why is someone caught red-handed also caught cold?

If a general statement could be made about where the languages differ in approaching hotness and coldness, it might be that Spanish treats them logically but—normally—with different parts of speech than English employs.

Usually, this means using a verb other than to be, plus a noun, where we would use an adjective. At least in the case of cold (adjective) and coldness (noun), they have the same form: frío (although the adjective is fría before feminine nouns). Fairly early, we learn to say tienen frío for they’re cold, instead of “están fríos”.

The coldness we refer to here is literal; son fríos could mean that they are cold in temperament, but, again, tener plus a noun is really called for: esta burócrata tiene frialdad is closer to it.

La frialdad, human coldness, does not overlap with la frigidez, which like our word frigidity flags female sexual frigidity. While frigidez is sometimes used, perhaps mockingly, for male impotence, the medical label term is impotencia sexual.

Instead of tener, we can use sentir if the thing in question is, well, sentient. This includes you if frostbite threatens your toes (siento fríos los dedos) or the guppy newly transferred to any aquarium with colder water (siente frío).

I know of one area where things are reversed; i.e., Spanish favors an adjective, and English, a noun. This is the pungent “hotness” in horseradish and chiles.

I was once in a Nicaraguan diner with a friend who desired to tell the waiter that the condiment chiles had “too much hotness” for her. By way of assistance, I could only say ¿Hay unos que son menos picantes? Later I checked the dictionary for a noun, something like picanteza or picantería. The former word should exist, but does not. The latter does exist, but it refers to cheap diners with trademark bowls of escabeche atop picnic-style tables. Someone pointed such a place out to me.

Now for some other adjectives of the hot-to-cold continuum. Ardiente literally means burning, yet it works for items that are merely hot and sizzling. Weather or drinks that are warm are cálido, but a warm greeting or personality is caluroso.

Cold, in weather contexts, is frío, and cool is poco frío, although this is often used ironically in place of mucho frío. Here, too, Spanish uses nouns where English prefers adjectives; furthermore, the verb you use is hace (does/makes): ayer, hacía poco frío (it was a bit cold—or just cool—yesterday).

In an earlier column I said that one way to recall this was to think of weather conditions as acts of God. What kind of weather is He making today? Hace frío/calor (He’s making coldness/heat). But I have heard polar (po-LAHR) used for another sense of cool in a drug-abuse abatement program: drug abuse no es polar, although polar is properly about polarity (polaridad) in physics.