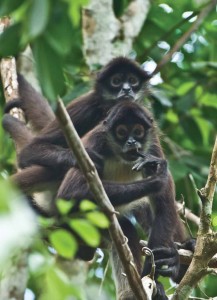 The plan was to rendezvous with friends at Yaxhá Lagoon then drive north to the remote site of Nakum. I met up with Belizean Alfonso Galvez and American biologist Harry Drexler for breakfast by the shore of magnificent Yaxhá. A bit of camp-stove magic, and I was serving up steaming plates of black beans, fried mol a’catch (turkey eggs) and stacks of toasted yellow-corn tortillas.

Then on to Nakum. Although it is only a 17-kilometer drive, due to abysmal road conditions the trip can take hours, sometimes four or five. We were traveling in two 4×4 vehicles and all of us have experience rambling around the back roads of Central America. The jungle was resplendent, the air very clear, the multitudinous tonalities of green was very intense; the birds, howler monkeys, cicadas and crickets, tree frogs and toads all singing together in a symphony of sounds.

At the National Park entrance, the attendants told us that, as far as they knew, the road was passable, and the first few clicks were OK, somewhat muddy, but passable. Then we came upon our first bog. The road degenerated into a muddy track and then into a mud hole. We plunged forward slipping and sliding while maintaining pretty high speed, hoping to careen through the slog. Alfonso was a crack jungle driver and with a combination of quick moves and precarious leaps—all propelled by insanely high velocity—he made it through the 100 meters or so of the bad stuff.

I was not so lucky, and after doing my best, my Toyota bottomed out about 10 meters from where the road resumed. I got out a portable come-along winch, and we went to work pushing and winching the Toyota inch by inch toward the solid shore ahead.

Then we heard the sound of a vehicle approaching from the north. A black Land Rover, so thickly covered in mud as if it had been completely immersed, came down the track. It was my old friend Neville Collins from Sittee River in southern Belize. And after we exchanged niceties with Neville, his wife and daughter, they explained that they had tried to make it to Nakum but finally gave up. They’d camped overnight night and were now making their way back to civilization. To their excitement they had actually seen a large jaguar lounging on a tree limb right over the road earlier that morning. Neville’s Land Rover was properly equipped with a large winch and together we turned our group around, helped each other through the quagmire, and made our way back to Yaxhá Lagoon.

Plan B. Happiness in the jungle is achieved by NOT being too goal-oriented and by being willing to adapt to and have fun with unexpected situations and changes in plans. Such was our case that day. We had a nice time making our chance encounter into a party on Yaxhá Beach. My group was still intent on getting to Nakum; we determined to go by foot the next day.

We broke camp before dawn and began our walk through the jungle in pitch darkness, only an occasional beam of moonlight breaking through the thick canopy. But the rainforest was far from still—we could hear many scurrying, slithering, chirping and crackling sounds all around us—and then the coughing-growl in the distance of Balam, the jaguar, causing my hearing to suddenly become super-acute.

By the time the first glow of dawn began to warm the air, we were already several clicks up the road. What was impassable for our 4x4s was easy to get through by foot … all we had to do was skirt the road a bit and walk around the mire. It was a glorious morning, the air clear, cool and fresh. This road is an excellent location for wildlife observations and we saw many species, including an ocellated turkey, slaty-tailed trogons, great kiskadees, a raccoon, coatimundi, tayras and an ocelot … plus a wide variety of lizards, spiders and butterflies.

Two hours into the hike we came upon a fork in the road and a sign pointing to a “Mayan well” (Pozo Maya). We decided to take that detour and see where it led. Three kilometers farther we came upon a huge clearing by the side a massive depression in the forest, which our guidebook said had been a man-made reservoir used by the ancient Maya 1,000 years earlier. Alfonso signaled us to stop and be quiet. Up on the other side of the clearing was a troop of perhaps 50 collared peccary. Usually the collared peccary are not a problem; it is their larger cousins, the white-lipped peccary, who have the reputation of being very dangerous, perhaps the most dangerous animal in the forest. Nevertheless, we were on pins and needles for a few seconds when suddenly one little pig snorted and clicked its teeth, and the entire troop trotted into the forest and disappeared.

This seemed to be an ideal place to camp, so we decided to stay and explore the area. It turned out to be a good decision, as the birding was excellent. We had the whole “green sea” to ourselves. By the campfire that evening Alfonso entertained us with stories about the old days when he and his boys would come across the border to Melchor de Mencos for a good pub crawl. We were laughing and in high spirits when from nowhere a large deer ran right through the flick-ering shadows … with a jaguar in hot pursuit! Harry jumped aside, spilling his drink, and fell to the ground. In the blink of an eye it was over and the jungle was all darkness and insect sounds. All we could do was shake our heads in amazement and marvel at what had just happened.

We were laughing and in high spirits when from nowhere a large deer ran right through the flickering shadows … with a jaguar in hot pursuit!

The next morning after a good jungle breakfast of hot oatmeal laced with allspice, raisins, peanuts and honey we retraced out steps to the main road and headed due north again. In another two hours we finally reached the ruins of Nakum, where the guard bade us welcome and took us to the camping area where there were basic facilities and a rain-water tank for drinking and bathing. We stayed for three days. It made a perfect base for jungle explorations. I had received a report from a bird watcher that he had seen what he thought was a harpy eagle, the largest eagle on Earth, and so I combed the area with the dream of finding one. But no luck. For those interested in archaeology, the ruins have undergone extensive reconstruction, and they are some of the most interesting in the entire Maya Biosphere Reserve.

On the way back to Yaxhá Lagoon we took the alternative route that begins several kilometers down the road south from Nakum. This narrow path takes you through dense, virgin jungle and comes out at the ruins of Yaxhá. The path is superb for wildlife encounters of all kinds. Back at the Yaxhá campgrounds, and after a cool shower and change of clothes, we were in fine form to toast the sunset and enjoy a gourmet repast of my specialty: fettuccini with olive oil, mixed vegetables and goat cheese, all accompanied by the daily sunset concert provided by the gregarious oropendolas. 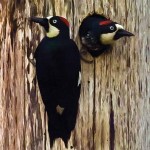 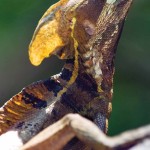 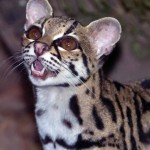 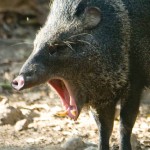