The Guardians of Las Gravileas 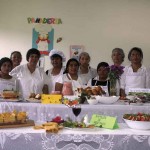 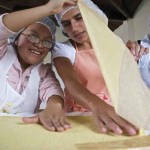 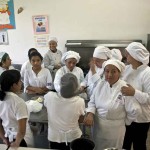 A project where women serve their sisters

The center’s name is symbolic. In a country where coffee represents approximately 10 percent of the gross domestic income, the gravilea tree provides a critical, protective canopy for the shade-loving plant. Just as the gravilea tree provides this fundamental necessity for the cultivation of coffee, so, too, is Las Gravileas meant to offer a protective, nurturing environment for women of every background and ethnicity.

“It’s a name that represents receiving, taking care of, and supporting the growth of a woman,” Project Manager Dalila de Montoya says. The keys to achieving this ideal environment, she adds, are education and training.

Las Gravileas is defined as a center for the promotion and technical training of artisan women. The project offers a large assortment of instruction, ranging from textiles, piñata making and ceramic molding and painting to cooking and baking, basic literacy, business studies and more.

“The idea is that they can learn and make many things that offer them an opportunity to gain more in their lives,” Gravileas instructor Alma Díaz says. And that is precisely what the project’s goals spell out: generating more sources of work and promoting Guatemalan culture—all through the advancement of women. Why women? Because, de Montoya asserts, women are in dire need of support in Guatemala.

Not only are they frequent targets of violence simply because of their gender, women rarely receive opportunities for basic education. Globally Minded, a social enterprise committed to supporting Mayan communities in Guatemala, reports that Guatemala possesses the highest female illiteracy rate in Latin America. Index Mundi bolsters that claim, stating that the 2002 national census defined more than 60 percent of Guatemala’s female population as illiterate.

“Women are not seen as great contributors to the country, so violence against them seems to be acceptable,” said Norma Cruz, founder and director of the Survivor’s Foundation, an organization supporting victims of femicide (the murder of women by men purely because they are female) in an August Al Jazeera article.

Las Gravileas is devoted to changing this sentiment by offering a safe haven where women can transform their lives and ultimately “transform the lives of the people with whom they live, with the people of their community,” de Montoya says. “They are eager to cause an impact in their society…  As an institution, we are causing an impact in the society.”

Dolores de Baeza, 54, instructs students at Las Gravileas in bakery and confectionary desserts. She says she teaches because she wants to offer Guatemalan women a way to climb out of the harsh reality that defines their lives. “To help the women and give them the capacity for earning extra money because life is difficult for a woman. Sometimes their husbands don’t have anything extra to give to their wives, thus, through additional means, the women work and are able to move ahead.”

Move ahead from extreme poverty, as Manuela de Jesús Tum Pérez puts it. She is an accountant for the Center of Family Integration and works with CFI’s Hogar Rural Rabinal (Rural Home of Rabinal). She was leading a group of about 20 women who had traveled four hours to reach Las Gravileas. This was the group’s third visit to the center, and each participant is currently enrolled in a program for learning skilled techniques in non-precious jewelry making. During each visit, the group spends three days and two nights at Las Gravileas. Tum Pérez says the training at Las Gravileas is helping make fundamental changes in their local community:

“This is a municipality that’s very behind. But with training, we teach the people about the fruits of developing and promoting women. And our people are beginning to send their daughters and women to the school. Previously, they thought that the woman did not have importance, did not have value, that she was inferior to men. Now, the women have been learning that everyone is equal.”

The project is in its sixth year of member training and serves 19 communities each year through its main school in Santa Catarina Bobadilla and two smaller, satellite schools that change locations each year. The center offers three types of training programs. A daily program allows participants to train for two hours each week in a selected course for a sliding-scale rate of Q40 to Q125 (about $5 to $15) per month. Women can also enroll in a two-year program, which offers a technical diploma in several trades. Students in this program train at the center three days a week during the first year and two days a week during the second. Rates for this program range from Q75 to Q350 (about $10 to $40) per month.

Finally, the center offers an intensive training program where participants pay Q185 (about $20) for a two-and-a-half day program that includes eight cooking lessons, two nights of accommodation, cooking equipment and supplies and an outing to La Antigua. “They go to Antigua to observe stores and businesses, visit places, go to hotels, go to restaurants and see how they operate, even how they decorate,” de Montoya says; “Things that could be useful for them to put in practice in their own communities.”

While the fees are impossibly low for training and services that cost so much more, Las Gravileas operates with the financial support and under the supervision of the non-profit ACOE (Asociación para la cooperación educativa). It is also supported by more than 20 national and international organizations through financial and material donations.

Díaz is convinced that the effort is worth it: “Perhaps we can’t change the world, but we can change one person’s life.” Each week she hears stories of little successes. Patricia de Vásquez, who has been studying desserts at the center for three years, says she is becoming a local favorite within her community. “Now, when I need cakes in my house I make them … because it’s much more economic and you can make them exactly how you want them. And, I sell now. If someone wants a dessert I can make exactly what they want me to make.”

The time for offering women real opportunities is ripe, de Montoya says: “Now is the time to give them their own space and we are giving it with much affection.”