The first North American to restore and live in an Antigua home was one of the most remarkable people this town has ever known. Mildred Covill, born in Iowa in 1898 had, by the time she was 16, been a soloist on the “Chautauqua Tour” with William Jennings Bryan, and (at an illegal age) homesteaded along 160 acres in Montana. Next she was in San Francisco selling real estate, and then worked as a reporter on the old San Francisco Call, later moving to Los Angeles where she was employed as a stockbroker. A striking woman, over six feet tall, and later with a mane of white hair, her very presence dominated any group. Even her arrival in Guatemala was unique.

The defunct Pan American Airways was not, as most believe, the first U.S. international airline. It was the Pickwick Bus Company of Los Angeles that began with a scheduled flight to Mexico City. Mildred’s husband was a pilot hired by Pickwick to be the engineer to plan a route extension to Guatemala City. After breakfast the morning of the trial flight, Mildred drove him to the airport. When the navigator failed to show up, the senior pilot asked Mildred to take the navigator’s place. Always ready for an adventure, she parked the car in the shade of the hangar and the three flew off in a Ryan, the same model plane Lindbergh had used to cross the Atlantic. Landing in wheat fields and on dirt roads, they eventually arrived in Guatemala City. The year was 1928, and Pickwick Bus Company, somehow anticipating the stock market crash the following year, immediately went broke. In order to survive Mildred opened the El Patio restaurant which was near the Palace Hotel in Guatemala City, zone 1. The restaurant became an immediate success with the city’s foreign colony as well as with a large group of Guatemalans and functioned for the next 40 years. Mildred did all the work and organization of the restaurant while her husband contributed by amusing clients with great stories of his exploits.

Mildred became a close friend of the first Mrs. Popenoe, Dorothy, when the Popenoes moved to Guatemala City in 1930. In 1932 the Popenoes moved to Tela, Honduras where Dorothy tragically died within a week of arrival. Mildred went to Tela at Wilson Popenoe’s request and escorted his young children to Maryland to be cared for by a relative. Mildred returned to Guatemala via Los Angeles where she found her breakfast dishes still on the table and her car, now four years older, still parked in the hangar’s shade.

Early on she fell in love with Antigua, a town then isolated by a long hour’s trip over a narrow gravel road, and in 1934 Mildred paid $320 for a ruined house on what was then known as the Street of the Bells. Today’s Casa de las Campanas required eight years of reconstruction, the work done with the loving care of an artist—which she was.

This was before tourism was actually an industry. Then, the few tourists that came normally all arrived in Puerto Barrios on the United Fruit Company’s Great White Fleet, took the train to Guatemala City, a bus to Antigua and on to Chichicastenango where they stayed at the Mayan Inn—at the time one of the world’s great hotels and still worthy of honorable mention. The tourists wanted to see a house in Antigua and Mildred obliged. Casa de las Campanas during and after its reconstruction became a part of every tour. To visit the house, one entered and left through a shop where Mildred sold backstrap woven textiles, working many into clothing of her design. She designed everything she herself wore, from her hat down to her shoes. All were of native weaving. When President Castillo Armas’ wife, during a 1957 State visit to Washington, followed Mildred’s example by wearing clothing of indigenous weaving, the press was effusive with its praise.

For two decades virtually every tourist to Antigua signed her guest book and for 10 years she was the only North American resident of the town. The advent of World War II and the closing of Europe to Americans was the beginning of today’s North American colony. By 1948, there were about a dozen Americans living in Antigua, the number falling to about six in 1951, when this writer first arrived. By then, Mildred had divorced Lewis Palmer, who later died in a plane crash in Florida.

Mildred was my family’s great friend, a powerful and varied influence in the early foreign colony and life of Antigua, always quiet in her multiple philanthropies. For years she taught English to a number of local needy children, some later becoming respected guides and entrepreneurs. She was ahead of her time as a singular and fierce advocate for keeping alive the artistry of Guatemala’s weaving. A portion of her textile collection was given to the Museo Ixchel (Guatemala City) during a ceremony honoring her at the American Embassy.

Mildred Covill Palmer died in 1981 in her Casa de las Campanas. She is buried in the Antigua Cemetery, the fourth mausoleum to the left of the entrance. 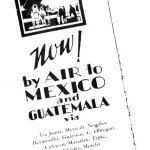 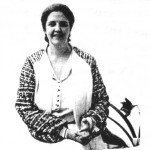 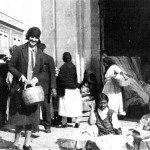 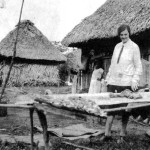 Mildred, displaying dried fish and shrimp for a photo op in the village of Santa Rosa near the Pacific. 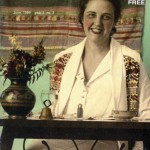 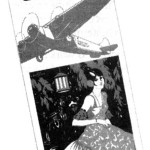