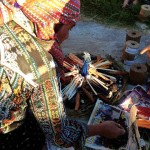 An innovative, sustainable alternative to wood as fuel

When most people walk down a road and see useless dry leaves on the ground, an EcoLeña producer sees gold.
EcoLeña is an innovative, sustainable fuel-wood alternative made from grass, leaves, straw and other renewable resources to replace fire wood. Also called biomass briquettes, EcoLeña is being produced and used in more than 60 countries.

The EcoLeña project in Guatemala was sponsored by National Geographic with two objectives. The first, to save trees from being cut down for fuel, and the second, to provide EcoLeña producers with a sustainable income from its sale.

In February 2012, Fundación Progresar, the Guatemalan non-profit foundation implementing the project in Guatemala in cooperation with the Legacy Foundation, selected 25 potential producers from Sacapulas, Coban, San Marcos and Santa Eulalia to attend the first producer’s training, which took place in April 2012 in Tecpán.

Seven months later, after the EcoLeña producers had gained substantial experience and shared their product with other communities, 15 of the best producers were selected to participate in a training of trainers. It focused on creating a group of skilled trainers who could share the EcoLeña production method with others in Guatemala and other Spanish-speaking countries. This training took place in Sololá in November.

Legacy Foundation co-directors Joyce and Richard Stanley, who provided similar trainings in Asia, Africa, Europe and the U.S., conducted the technical training, which included business skills in addition to production and drying practices. They had the support of Richard Moeschl as translator and the staff of Fundación Progresar as coordinators.

The Legacy Foundation likes to work itself out of a job rather than creating dependency on a donor, and the Guatemala EcoLeña project is now on the road to sustainability.

Contact Fundación Progresar: admon.progresar@gmail.com, visit www.fundacionprogresarguatemala.org for more information on how community groups, schools or other organizations can learn how to produce EcoLeña and use it as a fuel-wood replacement. Training can be provided in Spanish and in several Mayan languages. Contact Legacy Foundation at info@legacyfound.org or visit www.legacyfound.org and www.photopoa.com