The Art of Edgar Chipix, Exhibition in La Antigua, Guatemala 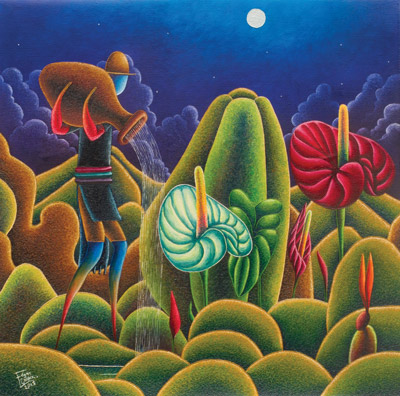 It was a magnificent morning in July when I first met Edgar Nehemías Chipix Coc. We were hiking up to his “point of inspiration” in Santiago Zamora, a quiet Mayan-Kaqchikel village situated within the municipality of Sacatepéquez about 15 kilometers west of La Antigua Guatemala. It is here where this inspiring and talented 24-year-old artist grew up and still lives with his family.

Machete in hand, Edgar led the way as we meandered through verdant cornfields and strolled across open meadows surrounded by lush jocote and avocado trees. When we reached his favorite overlook, views of the village below took my breath away. Agua volcano towered majestically in the distance and it was instantly clear how at peace he felt in this sacred spot.

Edgar has been painting since he was a young boy but it wasn’t until seven years ago that the subject matter and style of his work took a substantial divergence from the traditional and realistic images that characterize much of the art in the central Highlands of Guatemala. 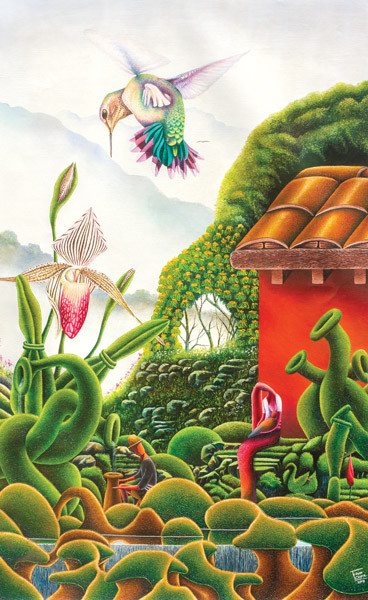 “Many of my ideas come to me in my dreams,” he explained. “Seven years ago, I had a very vivid dream about surrealism. In this dream, I was told exactly what colors and forms I should be using.”

Surrealistic art often uses dream imagery and symbols to tell a story or to express the inner workings of the mind. The creative landscapes and symbolism portrayed in Edgar’s upcoming exhibition “Dreams and Visions” reflect the strong connection and influence that his immediate surroundings still have on Edgar as a person and as an artist.

“I want to convey reality and at the same time express in painting what I am feeling deep inside of my heart,” said Edgar.

In the compelling landscapes, the viewer is confronted with fantastic imagery. Enormous ears of purple corn, gigantic flora and birdlife, as well as oddly shaped trees with tentacle-like roots, appear to take over the entire canvas. Humans with stilt-shaped legs add to the magical element and are a distinctive trademark of this gifted painter.

In 2009, visiting students from Boston collaborated with students from Santiago Zamora to create a stunning and colorful mural for the community. The gigantic mural begins with scenes depicting ordinary moments of village life, where children play sports and music or study art, and then progresses into a spectacle of striking Maya figures with stilts for legs, wearing surreal headdresses. It is immediately apparent which part of the mural Edgar painted.

“I think that this young artist has found new expressions for very traditional Guatemalan themes,” said Gavin Kern, curator of “Dreams and Visions.” Kern met Edgar a year and a half ago and was so taken by his unique talent that he took an immediate interest in Edgar’s career. “Dreams and Visions” is the culmination of Kern’s consistent support and belief in this gifted artist.

To fully understand the artist, is to understand the history of Santiago Zamora and the centuries-long struggles faced by indigenous populations. After achieving independence from Spanish rule, Guatemala abolished laws protecting communal lands that had been set aside for the indigenous Maya.

The once-communal lands that had provided a viable living for the Maya were suddenly re-distributed to the non-indigenous populations, creating mass unemployment of the now landless migrant workers.

What is particularly fascinating about Santiago Zamora is how the creative imagination of a town’s people dealt with this historical reality. Latin America, after all, is the birthplace of magic realism, a land where legends and myths still have a strong influence in everyday life, especially in smaller towns.

Magic realism, like surrealism, deals with reality but includes events and objects as people see and tell them, allowing strange, impossible things to be as commonplace as the sun or the moon.

When Edgar and I visited a women’s textile cooperative, a delightful Kaqchikel woman named Hilda, the cooperative’s founder, recounted the story of Santiago Zamora as it had been passed down to her.

“Long ago, the village of Santiago Zamora had a large and most beautiful lake. Every July, the village held a celebration to honor their patron Saint Santiago who lived with them and led a religious procession for the fiesta. One year, the men who liked to distill liquor shared it with the hard-working women who had cooked all day for the festivities. Everyone drank too much and fell asleep. As a result, the village burned down, the lake dried up and their patron Saint Santiago abandoned them. The village subsequently fell on hard times.” 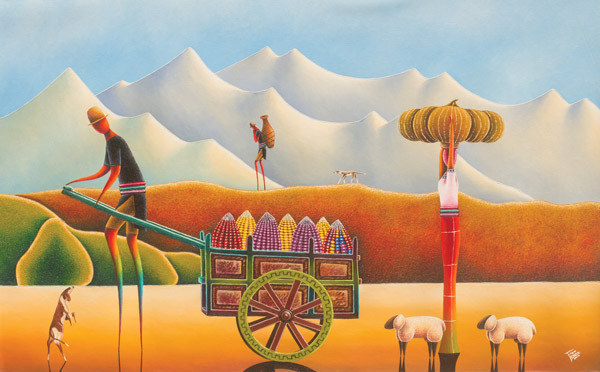 The story of Santiago Zamora as told by Hilda spoke in reality about the consequences that alcohol had on her village due in part to lack of opportunity and high unemployment. That is why the women of Santiago Zamora took it upon themselves to start their textile cooperative more than 10 years ago.

The proceeds are then distributed to support the village’s local school and medical clinic.
According to Alice Lee So Fong, co-founder of CasaSito—an NGO that works with youth in smaller Guatemalan communities—the entire village became motivated to send its children to school.

In 2008, CasaSito began a scholarship program for youth in middle and high school, providing talented students from rural areas with the opportunity to continue their education. There were lots of potential students in Santiago Zamora, a community of just over 900 people, but no high school. Edgar was one of the recipients of a scholarship.

“My greatest desire is to excel in the art of painting and to be recognized in my country,” said Edgar. “More importantly, I wanted to continue studying so that I can provide a good future for my family.”

The close relationship and support Edgar receives from his family has contributed to this young artist’s success, in particular that of his brother, Juan Jose. A carpenter by trade, he makes all of the frames for Edgar’s paintings and devotes much of his free time to helping his brother.

Many of Edgar’s works have appeared in collective exhibits throughout Guatemala and Central America, as well as in Australia and California. “Dreams and Visions” is his first solo exhibition. “Another one of my dreams is now becoming a reality,” said Edgar, who explained that just two years ago he dreamed about his work being featured in an exhibition at Galería Panza Verde. 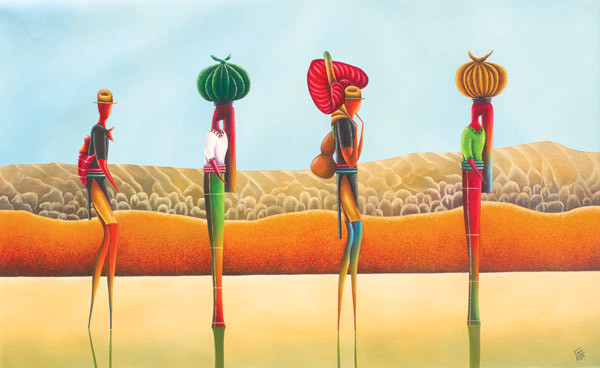