The Art of Absinthe 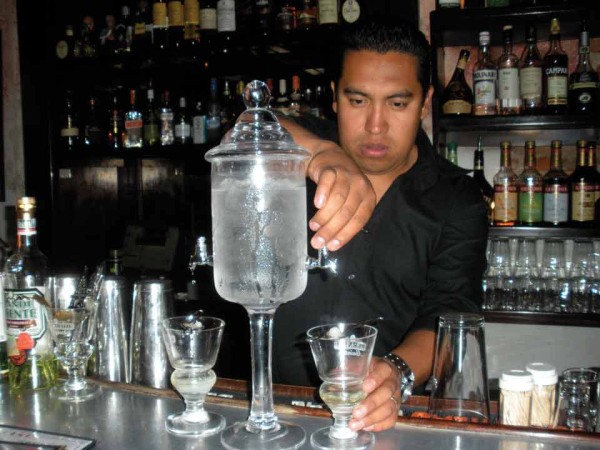 A drink of legend and mystique, absinthe is making a global comeback that’s also reached Guatemala.

Said to be the spirit that induced Van Gogh to lop off his ear and perhaps tainted the captain of the Titanic, absinthe was concocted in the 1790s by a French doctor living in Switzerland and promoted as a miracle cure-all.

In the 1840s, French soldiers in North Africa used the herbal, green-tinted liquid to prevent disease and purify water. As they returned to Paris, the potent, anise-flavored spirit became a fashionable, high-end drink, notoriously popular among artists and writers of the day.

Often featured in works by Toulouse-Latrec, Van Gogh, Manet, Degas and Picasso, absinthe quickly gained fame if not infamy, heralded as the green fairy, the green goddess, the green muse, the glaucous witch and the queen of poisons.

By the late 1800s, absinthe had become cheaper than wine, giving wine producers an odd alliance with the growing prohibition and temperance movements. For reasons real and imagined, the green fairy was easily demonized; bans on its consumption followed in the early 1900s.

Although prohibition laws were widely repealed by the mid-20th century, only in the past decade or so has absinthe returned to drink menus of the world.

Its French heritage is among the reasons Bistrot Cinq proprietor Robbin Haas recently added an absinthe bar at his popular French café, 4a calle oriente #7 in Antigua.

“There’s a mystique behind it. … It also goes along with Antigua’s image as being mystical,” Haas says. “It’s difficult to get in here—but that’s part of the fun of it, too.”

Since opening Bistro Cinq in late 2007, Haas always stocked a bottle or two of absinthe; a few months ago, he made it a specialty, offering eight varieties.

His bartenders serve it in the classic process that blends the precise amount of cold water, dripped over a sugar cube through a specially slotted spoon, into a bubble-shaped glass for a perfect cocktail.

“Outside of champagne and cognac, it’s one of the few drinks that has its own uniquely shaped glass,” Haas notes.

Unlike folks who knock back tequila shots, absinthe aficionados are of another ilk.

Absinthe doesn’t have a large following but it is a devoted one.

“There’s a society of people out there who search it out. It’s a different clientele,” Haas says. “We had one customer who asked us to come to her house and serve it, which we did. We go way above and beyond.”