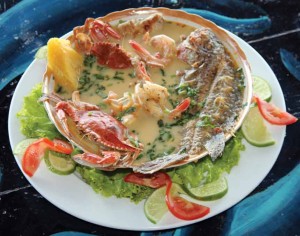 With an abundance of impossibly fresh seafood and locally grown, tropical produce—from bright green plantains to coffee-brown coconuts—it is no wonder food on Guatemala’s Caribbean coast is distinctive from platos típicos found on the interior.

Aside from ingredients, the major culinary influence at the Río Dulce and surrounding areas comes from a community of people self-identified as Garinagu but commonly known as garífuna. The garífuna are an old and proud Carib peoples, descendant from a South American indigenous community, the Arawak, and African slaves brought over by Spanish ships as early as 1635. Today there are thought to be about 100,000 people who identify as garífuna, living mostly in Caribbean-bordering countries and islands, but as far away as New York City. They have preserved strong Afro-Caribbean traditions passed down to new generations through dance, drum music, artisan crafts and of course food.

Tapado (ta-paa-do) is one of the more popular garífuna dishes, consisting of seafood, bananas and plantains all swimming in a spicy, coconut milk-broth. Many restaurants and local stalls sell this fragrant concoction in Lívingston, where Guatemala’s largest population of garífuna resides. If a trip east is not in your plans, try out the recipe below to bring the flavors of the Caribbean to your kitchen. But Garífuna National Day is November 26; this celebration of Garinagu heritage and culture is where you are sure to find tapado and other traditional foods sold by the buckets. However you come by it, tapado will quickly become as vivid in your Guatemalan memories as tortillas or frijoles volteados. Enjoy!

In a large pot, sauté garlic and ginger in oil over medium heat, about 1 minute. Add onion and pepper; sauté for 3-4 minutes, or until onions develop color. Add spices (not salt) and cook for 1 minute. Add coconut milk, broth and bay leaf; bring to a boil. Add potatoes and green banana and cook on medium high heat until almost tender, about 10 minutes. Turn down heat and add plantain, tomato, and seafood; simmer until everything is cooked through, about 5 minutes more. Turn off heat, stir in half of the cilantro. Ladle into bowls and serve hot with cilantro garnish. 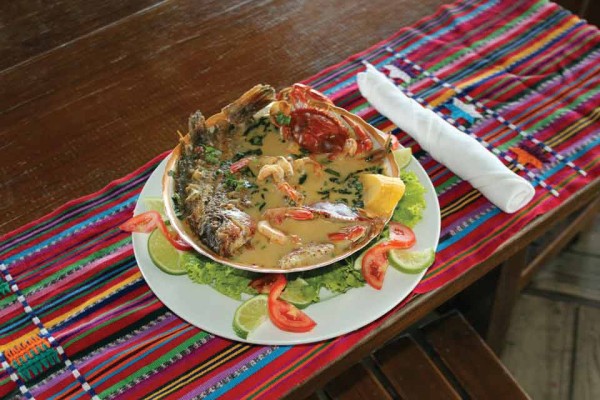