An ethnobotanical with interesting properties 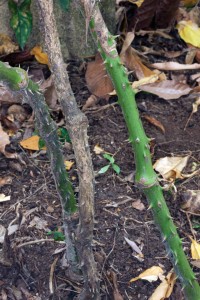 Smilax is a crucial ingredient in Mayan ethnobotanical recipes, both from Guatemala and Mexico. However, it is notable that, in general, Mayanists know very little about this seemingly bizarre plant.

I have studied plants of the Maya since the 1970s, and I must admit I never heard of this plant until four years ago. And for three of those years Smilax was simply one of 400+ plants on my list of Mayan ethnobotanicals. I had no idea what Smilax was used for other than as a flavoring for beverages.

This year, 2013, courtesy of the help of experienced agronomist Armando Cáceres, we found Smilax species at an ethnobotanical in Samayac, Suchitepéquez, on the south coast of Guatemala.

I then began a study of the plant. During this same six-month period I was also researching colorants for dyeing Mayan cotton, and flavorings for beverages other than cacao. Over and over during months of research on plant themes, I kept finding that one or other of the species of Smilax was used in so many diverse applications.

So far we have found only the plant, not flowering and not yet with its berry-like fruits. It has been reported that one or another species of Smilax grows in the departments of Alta Verapaz, El Petén, Izabal, Sololá and Suchitepéquez. Now that we understand the role of Smilax root in the daily life of the Maya people, we look forward to finding at least four different species. So the search goes on.

If you have zarzaparrilla, palo de la vida, sinaca erivón, coculmeca roja, diente de chucho or uña de gato on your finca or have friends who have, please notify us at FrontDesk@FLAAR.org. We would appreciate knowing more precisely where we can go to photograph the diverse native species of Smilax in Guatemala, Belize, Honduras and El Salvador.

We are developing a bibliography on Mayan ethnobotanicals on our www.Maya-art-books.org. Our photographic and documentary material is shown on www.maya-ethnobotany.org.

Warning: We do not recommend eating, drinking or experimenting with Smilax. Our project is to study historical ethnobotany: what the Maya and Aztec of pre-Columbian Mesoamerica used in their daily lives and in their rituals. We dedicate our staff and initiative to learn, and then to disseminate the results of our studies. But we ourselves do not taste, eat, drink, sniff, snort or otherwise imbibe these plants (though obviously I eat maize, beans and squash)!