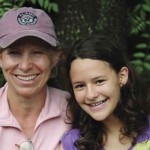 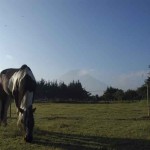 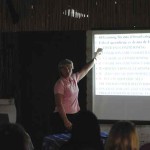 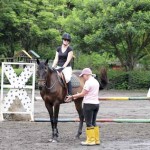 Have you ever “choked” in the face of an important competition? Many athletes have panicked and become paralyzed in the arena, even to the point of giving up sports they really liked.

In June, Sandy Venneman, psychology professor and equestrian, visited Club Ecuestre La Ronda in Finca Azotea in Jocotenango, where she explained learning theory and sports psychology, providing principles that can be applied not only to equestrians and horses, but to other athletes and animals, and possibly even to the education of children.

With respect to the “choke” effect, Dr. Venneman suggested that we put the competition into perspective. It is not a life-or-death situation, paling in comparison to endemic poverty, volcanic eruptions and mudslides. Another strategy to avoid “choking” is to practice under competition-like conditions, even to the extent of wearing your show clothes for practice.

In using learning theory to train your horse to step forward quickly, you squeeze your legs tight against him, and he moves forward. You should then (a) keep up the pressure, (b) press harder to make him go faster, or (c) release the pressure?

According to learning theory, you need to (c) release the pressure, eliminating the unpleasant leg pressure to reward the horse for responding. This is called negative reinforcement. Parents use the same principle when they release their teenage children from being grounded when they improve their grades in school.

According to Sandy, the best way to use learning theory is to provide positive reinforcement to increase the likelihood of a desired behavior. Horses may respond to pats, carrots or “good boy.” She says that, “for most humans, including riding students, significant others and children, acts of service, praise, gifts, food, quality time and touch are effective rewards.”

Velvet Beard reflected on what she had learned from the clinic: “Getting a different perspective and seeing how Sandy got my horse to relax by getting me to relax. It was challenging because it is very hard to change your habits. For example, when I relaxed my body I felt like a rag doll in the saddle, but the effect it had on my horse was amazing,” she said.

While giving the equestrian clinic at Finca Azotea, Sandy enjoyed the natural beauty of the setting, commenting, “what a spectacular place to ride, with volcanoes in the background.”