Premier in Guatemala City of Looking for Palladin 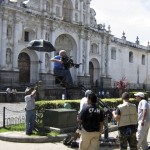 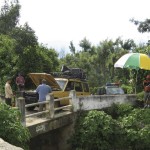 Looking for Palladin was filmed in La Antigua in 2006, see DateBook, May 7 for information on the premier in Guatemala City.  For updates: www.revuemag.com

Comments from the Critics

REX REED -The New York Observer: The cinematography beautifully captures the dramatic hues of the gorgeous textiles, shifting moods and architectural splendors of Guatemala, which is neither South America nor Mexico, but a magical combination of both, with azure skies and buildings of saffron yellow and chili-pepper red paint.

RONNIE SCHEIB – Variety: Local color has rarely been more colorful than in Andrzej Krakowski’s resplendent Guatemala-set outing … Genial showcase for Ben Gazzara casts the indomitable near-octogenarian as a two-time Oscar winner who has abandoned Tinseltown for the laid-back society of artistic expats in Antigua, which the helmer renders with warmth and flair.”

ROY D. KORIAKIN – FilmThreat: Andrzej Krakowski’s character-driven film takes its time with the characters, giving the audience a chance to get to know them and their lives. The theme doesn’t involve transforming robots or building crawling super heroes. It centers on real people and their introspective on the importance and appreciation of relationships and family. […] Looking For Palladin was a breath of fresh air. It deserves to be seen by the masses. And, hopefully, it will.

CHICAGO LATINO FILM FESTIVAL: This reporter was privileged to have been present for Sunday night’s screening at the 25th Chicago Latino Film Festival, the largest, oldest, and most influential Latino film festival in the U.S. Well over 200 people attended the screening. […] To describe the reception as tremendously positive is to understate it—seriously. Audience members who hail from Guatemala (and there were many) had tears in their eyes as they praised the picture and participated in the post-screening Q&A session that went on till midnight. Said one such audience member, “I have never seen my country shown so poetically and lyrically.”