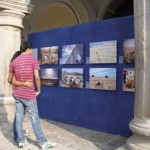 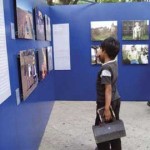 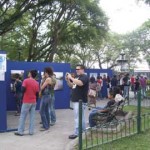 “Water, Rivers and People / Agua, Ríos y Pueblos,” is an international traveling photographic exhibit that takes a critical look at water conflicts around the world. The exhibit focuses on the human and environmental costs of contamination and catastrophes, ecosystem degradation, water as a human right, privatization and mega-development projects such as hydroelectric dams and open pit mining. The exhibit is divided into 30 case studies selected from five continents, organized into seven themes. One thematic area is dedicated to local case studies in Guatemala, developed in conjunction with civil society organizations and local communities.

We live on the Blue Planet, the Water Planet. Yet according to the UN, 1.1 billion people lack access to decent drinking water. Because of this (and the related, though even more widespread, lack of decent sanitation), some 20,000 people die every day, most of them children. In reality, we are facing a crisis of unsustainability, which we have caused by taking too much water from the environment, systematically polluting our rivers and aquifers.

The pressure for privatization from agencies like the World Bank has transformed citizens into customers, ignoring the fact that access to drinking water should be guaranteed and a human right. In sum, we are facing a hydrological holocaust, in which the victims are invisible, distant and faceless. Our consciences easily forget them.

In the Water, Rivers and People exhibition, we decided to give a voice to these people, who are simultaneously both victims and protagonists for a more just, dignified, and sustainable world. We aim to show the human side of water conflicts, giving those who suffer and struggle the most the opportunity to express themselves. Perhaps they do not have all the answers to these problems, but there is no doubt that they are suffering on the front lines. They deserve to be heard and their stories taken into consideration.

The national case studies that we have on hand and will be developing include the following: Extractive Industries and Contamination in Laguna del Tigre; Laguna Chicabal: Community Management of Sacred Water; Water and Gender in San Miguel Ixtahuacán; Cleaning up Lake Atitilán; Community Consultations and ILO 169 in Guatemala; Agatha and Climate Change in Guatemala; Water Management in the 48 cantones of Totonicapán; Monocrops and Water in Guatemala: African Palm and Sugar Cane; Mini Hydroelectrics in Guatemala.