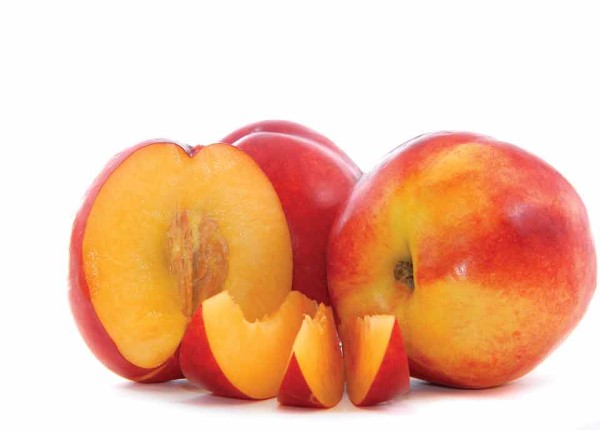 Peach tastes and peach tones are challenging to find in Guatemala, but it’s worth taking the challenge and seeing what you can discover. Peach tones—those orangy, reddish, yellowish, pale shades that decorators like—aren’t around gardens or weavings as are so many brighter colors. Luscious peach fruit and juice are in our markets, but not all that common, which is a little strange, as Spanish explorers brought the peach here two centuries before the fruit reached northern Europe and North America.

In the Guatemala Highlands and even in Guatemala City, farmers and homes rich and poor often have a peach tree or two in the yard. The fruit can be ripe any month, and peaches in local markets are usually tree-ripened. They’re not as perfect-looking as commercial varieties sold in other countries’ supermarkets, but so much richer in taste. Seek out melocotones when you’re shopping, and you’ll be rewarded by their great flavor and aroma.

When peaches finally did get to France and England, they were popular additions to fruit bowls for art students to recreate in oils. Same here. From Spanish Colonial days to now, you’ll find budding artists practicing with oils and watercolors, trying to catch the complicated blend of tones of a peach. In big and small homes, you might find a fruit bowl composition on a wall, done by an ancestor decades ago when he or she was in school, copying the Old Masters from Europe.

Sure, there are peach-tone flowers around, especially some bougainvillea spilling over walls, though not as often as red and purple vines. Check out the flower markets, and among the stronger tones you’ll find peach roses, lilies, fuchsia and dainty little freesia with their heady odor.

To capture the absolute best peach shades in this country, however, you’ve got to get outside—at the right time—to see peach spread across the sky for a few moments at dawn, or lingering a little longer at sunset, or spilling down the flank of a volcano blended with the fiery reds and yellows of the lava. Peach in the skies doesn’t last long, but you’ll never forget when you do see heavenly peaches in Guatemala.