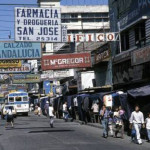 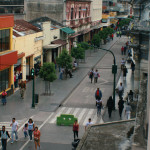 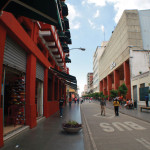 Last year, the municipality of Guatemala City undertook a project to conserve and revitalize the city’s heritage, and it started with La Sexta Avenida, Zone 1: the backbone of el centro histórico.

Historically, La Sexta was the fashion capital of Guatemala—the place to see and be seen—with shops selling luxury goods and the latest in European trends. However, after decades of neglect it endured a long downward spiral and became a chaotic jumble filled with street vendors, oversized billboards and congested traffic.

But now the tide is turning.

After encouraging various businesses such as Pollo Campero and McDonald’s to invest in the project, the municipality has transformed the crowded mess into a vibrant avenue—safe for pedestrians to wander down.

The restoration team started by relocating dozens of street vendors who used to clutter the sidewalks, selling pirated DVDs and designer knock-offs. They then spent a year cleaning (and widening) the pavements, putting up new artwork and taking down old signs that covered every inch of the buildings. The emphasis on orderliness is now so strict that not even presidential candidates are allowed to decorate the avenue with their campaign propaganda.

Today the street, which has been renamed Paseo de La Sexta, runs from Plaza la Constitución (central park) to 18 Calle and is mainly pedestrian-only with just the Transmetro and a handful of cars allowed through. Regularly patrolled by uniformed police officers on bicycles, it’s once again a safe haven for Guatemalans to shop, socialize in coffee shops and admire the public art that adorns each side of the walkway.

The avenue has fast become a popular venue both day and night. Some city dwellers have even described the transformation as “another world” and say the radical changes have injected life into the capital and given the people access to a cleaner and safer place to visit.

However, despite the marked improvements, a small number of locals lament the changes and believe that the municipality has stripped La Sexta of its identity. Once a symbol of the 1980s fighting between the army and the people, they say these poignant marks from the clashes 30 years ago have been removed and the important years of yesterday now lie forgotten.

The municipality plans to continue restoring over 100 historic monuments around the city and still has further plans for La Sexta. These include opening art galleries and bookstores and restoring an old movie theater in the recently transformed public space.

It may only be a small change to a small avenue in a city filled with problems, but it’s a start at improving the quality of life for the people who live in the surrounding areas.