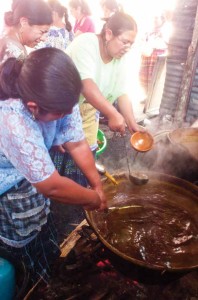 Serving up a steaming bowl of cak’ ik

Central to the life of each and every Mayan community in Guatemala are the activities of the cofradía, the traditional religious-political brotherhood, which is in reality a parallel government with its own elected officials and mayors.

In many respects the cofradía has more authority than the “official” federal government. It is the cofradía that organizes and oversees the main cultural events of the year, which include the celebration of the Saints Day, the Rub’el Nimq’ e and of the main village festival Li Nimq’ e.

Always part of the festivities is the traditional feast, known among the Maya Q’eqchi as the paab’ ank, and the whole community is invited to a delicious banquet featuring local delicacies along with traditional music, dance, prayers and speeches. And in the region of Cobán local delicacies include cak’ ik, a delicious and spicy turkey soup accompanied by tamalitos (small steamed cornmeal packets wrapped in a corn husk), stewed wild herbs like maqui, fresh wild fruits and never-ending stacks of steaming corn tortillas. It should be noted that the Maya were the first to domesticate the turkey, evidence of this goes back more than 3,000 years.

As the guests absorbs all the sights, smells and sounds of the paab’ ank, they are transported to another world; a world that has its roots firmly planted in traditions going back thousands of years.

Method:
Cut the turkey into pieces and put into a large kettle, covering with water. Boil and then simmer. For a free-range turkey this will require about 1½ hours to cook properly. For a commercial turkey reduce the cooking to about 1 hour. Add salt to suit your taste. Depending on how spicy you would like your cak’ ik, add a tablespoon, more or less, of chili cobanero, the most delicious chili on Earth from the moutains of Lanquín and Cahabón in Alta Verapaz Department. (Chili cobanero is readably available in Guatemalan supermarkets.) Although not traditional, some chefs will add chicken bouillon.

The onion, pear tomatoes, sweet peppers, miltomate (a kind of miniature green tomato common to Guatemala) and garlic are to be well grilled. Traditionally this would be done on a wood fire. This can also be done with a gas oven grill.

All the dry ingredients, the sesame and pumpkin seeds, pepper and cloves, and the two varieties of dry chilies, are roasted. Traditionally, this would be done on a ceramic or clay comal griddle. You may do this in a heavy cast-iron skillet. Roast them until well toasted but not burnt. The chilies should crumble if you squeeze them.
Now put all the roasted and grilled ingredients and the achiote paste into a blender with enough water, and blend until smooth. Traditionally, this would be done with a stone metate (mortar and pestle).

Add all these ingredients to the kettle along with the whole, tied bunches of cilantro, hierba buena and zamote. Simmer the soup for another 30-45 minutes. (Note, the herb bundles are not served in the bowl of soup, they are for flavoring only.)

And now you are ready to serve up your authentic, traditional Mayan cak’ ik along with fresh corn tortillas, corn tamalitos, seasoned rice, perhaps sautéed mixed vegetable escabeche and fresh fruits of the season. If you want to get REALLY authentic you may serve a hot or cold unsweetened chili beverage spiced with ground chili pepper. Also traditional at most Mayan feasts would be some variation of boch, which is a fresh, fermented brew made with honey or cane juice mixed with corn masa. Be careful, as some types of boch can really pack a punch. 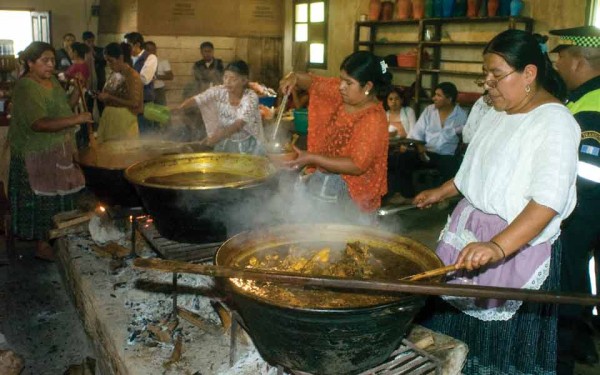 Serving up the Paab’ Ank feast at the old Hermitage of Santo Domingo, Cobán during the August Festival.