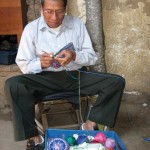 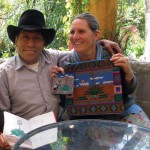 The finished product to author Rousso.

Handmade bags reflect the creativity of a tradition

The morral (bag) is a common textile item found all over Guatemala and is often distinct to specific municipalities. Bags likely developed because men’s traje does not have pockets, and they became a necessary accessory for men to carry small items when walking to the milpa fields or market. Women sometimes use morrales but mostly carry items wrapped in a cloth, which is balanced on their head.

The traditional morral of San Marcos la Laguna, Solola, is made from the fibers of the maguey plant. The extraction process includes cutting and trimming the leaves, then transporting them to the lakeshore. Here, men pound the leaves with wooden mallets on large stones, after which the leaves are soaked for several days in the lake. This process softens the tough, thick leaf exterior so that when scraped on a plank with a long-handled, dull-metal tool, the inner fibers remain. These are then dried, leg-spun and “knitted” into beautiful morrales.

In other municipalities morrales are made from a variety of materials, techniques, colors, patterns and styles. One such place is Todos Santos Cuchumatan, Huehuetenango, where the common mo-rral is a brightly colored, cotton-crocheted bag. Sometimes techniques and ideas travel from one place to another, and crossovers happen between communities when contact is made, such is the case with a man from San Marcos la Laguna, Solola.

In the 1970s Mateo Sanquoy Puzul worked for the municipality of San Marcos la Laguna and was accused of embezzling public funds. Mateo subsequently spent three months in the Solola jail. It just so happened that an inmate from Todos Santos shared his cell, and to pass the time this man worked on a morral. Mateo observed him and slowly learned the process for creating a Todos Santos-style bag, which he later taught to his son, Salvador.

Salvador perfected the art and now crochets intricate, colorful morrales with one side usually depicting a local lakeside scene and the other, specific to the buyer. In my case, I requested a maguey plant, and as he does with all of his design ideas, Salvador drew a picture of the maguey plant in a notebook. The pages were filled with a variety of other drawings, and from that he crocheted the design. I left the colors up to him, and one month later the bag was complete.

When Salvador explained his story to me, he showed me an old photo of his father with a tourist and a crocheted morral. Apparently, the tourist was so impressed with the bag that she had her photo taken with it and upon return to her European home, sent him a copy. This was all the encouragement Mateo needed, and the rest, as they say, is history!

To order a bag from Salvador, look for him in barrio uno, San Marcos la Laguna, Solola.