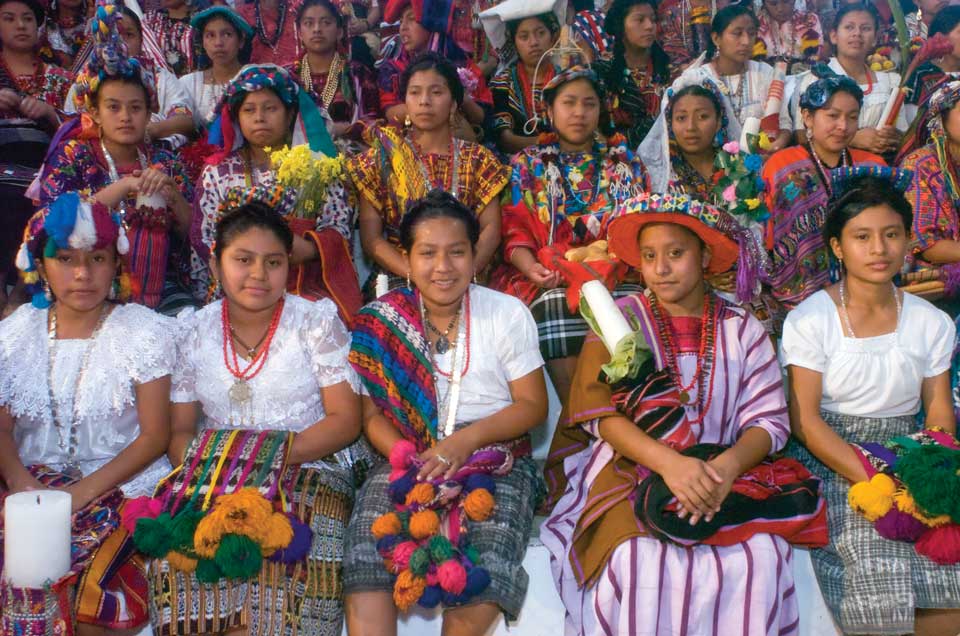 Candaleria Coquix grew up in the little settlement of Cantón Zapotál, part of the Municipality of San Lucas Tolimán in the Department of Sololá. Just a stone’s throw from a little bay on the southern shore of Lake Atitlán, Zapotal is home to the extended Coquix clan, founded by their patriarch Santiago Coquix during the early part of the last century.

Candaleria, known to everyone by her nickname Clara, stood out from an early age as an unusually curious and precocious little girl. Dressed in the multicolored and elaborately patterned traditional traje of San Lucas, red and white striped blouse and rainbow-hued skirt, she was a beauty. Her long black hair, carefully braided by her mother, was always adorned with colorful satin ribbons, in the old style, the way she liked it. Clara proved to be an industrious child, and she was always busy helping her nana, taking care of the other children or helping with cooking chores. I have heard foreigners sometimes decry the fate of humble Maya youth because they “have no childhood” since they are at work from an early age. This is a misunderstanding of how things work in the Mayan world. Clara, instead of having a baby doll to play with, always had a real baby to look after, and instead of a cooking play set, she was actually helping to prepare the family’s meals. In their culture participation in the community economy from an early age gives the child a sense of self-worth that does not come from simple child’s play. 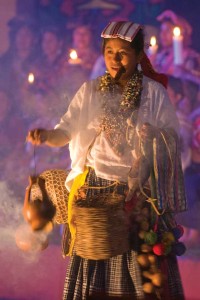 Village life begins an hour or so before dawn when the women and girls arise to grind the corn, which had been cooked and soaked in lime water from the previous afternoon. In the old days a stone metate, a kind of mortar and pestle device, was used to crush the corn into the masa (dough).
Some women still prefer the traditional way of grinding, saying it makes better-tasting masa, although it is more time consuming and laborious than using the motor-driven mill called nixtamal.

By flickering lamplight the little thatched-roofed, dirt-floored hut of the Coquix family is abuzz with whispering voices, and soon there is the pat-pat-pat sound of tortillas being carefully hand-shaped and placed upon the ceramic grill to be toasted to perfection for breakfast. As morning breaks the men and boys are getting up.

Soon the entire family gathers around the fire to share the humble repast of delicious hot tortillas, black bean stew and sweet coffee. All but the sugar for the coffee and the salt for the stew had been produced by the Coquix family, and there is a kind of pride and satisfaction that comes from growing your own food. Of course, for the Maya, corn is absolutely sacred and every aspect of its cultivation and production is done according to ancient spiritual principles.

Soon the men and boys have gone off to the fields, leaving the women and girls to themselves. Clara loved learning how to weave with a backstrap loom, and by the time she was a teenager her creations were considered by all the women to be superlative. The traditional huipil (blouse) of San Lucas includes rows of small, intricately detailed figures of plants, animals and sacred geometry. Clara was an innovator and created her own design motifs, which were so popular that other girls would often copy her patterns.

Clara went to the Catholic parochial school in San Lucas and even became friends with Father Greg Schaffer, the priest in charge of the church. Father Greg is famous in the lake region, having arrived in the 1960s—by foot—after walking all the way from his home in Minnesota! Father Greg was also instrumental in developing programs that allowed local Maya to own their own land, thereby liberating many from dependence from unregistered property overlords.

And I suspect that it might have been Father Greg who nominated Clara as a candidate as the local Maya princess, a title conferred upon a lucky girl during the annual town festival. And sure enough, when it came to the election, Clara, dressed in the ceremonial traje that she and her mother had worked on all the previous year, won hands down. The judges also noted that she was particularly eloquent in her oratory skills. With tears of joy, accompanied by princesses from all around the lake, she was crowned the new Princess Te’ej Uleuf of San Lucas Tolimán.

Every Mayan town in Guatemala elects its own princess, whose duty and privilege it is to preside over all the local events during her year’s reign. But the real highlight of the girls’ experience, and what all Maya princesses look forward to, is participation in the annual election of the Rabin Ajau, the Daughter of the King, which takes place the end of July in the Imperial City of Cobán, Alta Verapáz. This is the paramount indigenous cultural event of the entire Mayan world. And it is amazing to me that this event as yet receives only paltry support. If I were in charge, I would elevate this event to the world-class status that it deserves. And I predict that this will eventually happen as part of the inevitable Mayan awakening, which is happening now. 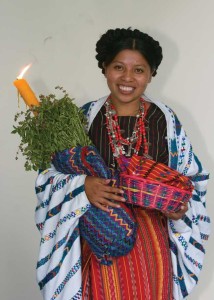 Finally, the last week of July arrived and Clara, along with her mother, father, sisters and brothers, boarded the bus for the eight-hour journey to Cobán. The Rabin Ajau event is a week-long affair beginning with the day of arrival when all the girls are greeted by the reigning Daughter of the King. From the time the girls arrive all their expenses are taken care of by the city of Cobán. Accompanying family members must make their own arrangements.

A local photographer covering the event commented that for many of these girls it would be the first time in their lives to sleep in a “real bed.” My first reaction was to take this as a somewhat disparaging remark. But, the fact is, what he said was true. In fact, Clara had never slept in what we would call a bed. All her life she had only slept upon rough-hewn slabs of wood covered with a woven reed mat with a homespun wool blanket to keep her warm. And now Clara had her own room in a prominent hotel, complete with her own very soft though foreign bed! Ah, luxury! Would life ever be the same?

The Rabin Ajau event is part of Cobán’s annual festival, which is really a massive party for all the residents that includes parades, musical concerts, Ferris wheels and roller coaster rides, and many other events where dignitaries preen, and overly long speeches are delivered. The 100 or so princesses take part, but all of this leads up to the last Saturday in July with the Rabin Ajau Pageant.

The pageant used to be an all-night affair, a marathon during which each and every princess had the opportunity to take the big stage and show off her prowess in delivering a speech in her mother tongue. (There are 21 native languages spoken in Guatemala.) The speech would convey her knowledge of traditional spirituality and etiquette and demonstrate her personal charm and grace. Organizers, taking pity on the audience, have streamlined the event by having a pre-selection a day or two before the main pageant cutting in half the duration of the show. Personally I liked the “all-nighter,” where all the girls had the chance to be in the spotlight. I have even suggested to the organizers that it might be especially magical to coronate the new Rabin Ajau at dawn. But I understand that for most, an all-night pageant is a bit much, and I did notice the mayor of Cobán himself was snoozing off and on during the last all-nighter.

At last, Saturday night arrives and all the girls, dressed in the most gorgeous traditional hand-loomed costumes, make their way in gaily festooned buses to the enormous hall where the main stage had been transformed into Tikal’s Pyramid of the Inscriptions. The auditorium was packed. The bleachers were full of spectators, mainly friends and family of the princesses. Dignitaries sat in places of honor, the mayor of Cobán and family lounging on his traditional black leather couch. A few visitors had traveled from foreign lands, including a small contingent of Cherokee Indians from New Mexico, their leader decked out in full ceremonial regalia. 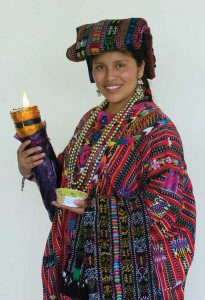 One after the other, barefoot and without any hint of makeup, each finalist took to the stage, appealing to the Great Ajau, Lord of the Universe, to bless all those present. Each girl carried a ceramic censer from which wafted copious clouds of sacred copal-pom incense. Their performance included the recitation of ancient Mayan Scriptures and words of wisdom from the grandparent tatas and nanas.

After more than four hours of kaleidoscopically mesmerizing color, sound and dance the team of judges selected 10 finalists, and among them was Clara. As each girl took to the stage to make her final bid to win over the hearts of the judges, her family and friends shouted their enthusiastic support: We love you, Matilde! Go for it, Sara! Yeah, Clara! Everyone from Zapotal thought that Clara was going to win, and I did too, but she did not take the stage for her final performance until after midnight. It was evident that she was exhausted. Her delivery was not as sparkling as it might have been. The judges finally made their decision.

The master of ceremonies was handed a card and after a few moments of overly theatrical delay, he read out loud and clear: The New Rabin Ajau is the beautiful princess from Totonicapán. The entire hall roared with approval as the outgoing Rabin Ajau solemnly placed her crown upon the head of the new Maya queen from Toto. A moment later the new Rabin Ajau was surrounded by all the other princesses, who showered her with hugs and kisses.

There are no losers here. All are winners! Because the Rabin Ajau is a sacred event, a “beauty pageant” the way a beauty pageant really should be—where stunning princesses from all over the Mayan world come together for a week of sharing and solidarity under a spirit of peace and harmony and where a girl’s spiritual beauty, grace and wisdom are valued above all else.

The Rabin Ajau Pageant occurs every year on the last Saturday of July in the Imperial City of Cobán, Department of Alta Verapáz. The pageant and its weeklong lead-up is actually the kickoff for the massive annual Cobán Fair, a worthwhile-to-visit event in itself. 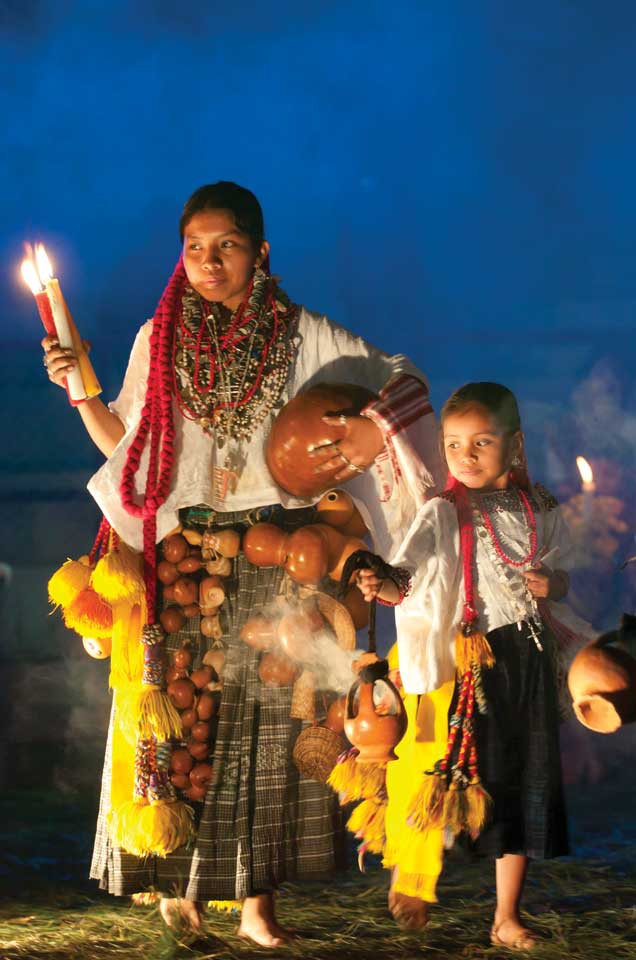