Mayan Patron Saint is an enigma

There is not a town or village in the entire Mayan Highlands where the presence of Maximón is not being asserted. Although the guide books for many years have only listed three Maximón shrines—San Andrés Itzapa, Zunil and Santiago Atitlán—there are literally thousands of Maximón temples and chapels all over Guatemala.

Maximón vies for importance with the principal Catholic saints, and the church has been waging war on him for 500 years with but little success. The cult of Maximón flourishes all over northern Mesoamerica.

But who is this Maximón? Maximón is an enigma. Some scholars will tell you that that he is a corruption of the Catholic San Simón. Others will tell you the “indigenous saint” is most definitely pre-Columbian in origin. Many scholarly articles and even entire books have been written about him, but no one can agree about just exactly who he is or what his origins are. He is present in many, if not most Mayan shamanic temples. His figure can also be seen in seedy bars in Chimaltenango. His best-known physical appearance is that of a Spanish overlord, although he can just as easily take the form of a primitive stone idol or even an extra-terrestrial.

Maximón plays a prominent role during Holy Week in which he morphs into Judas Iscariot and is seen paraded about town and hung above the entrance of many Catholic churches. The moment of the most intense excitement is when Maximón is brought out of his shrine to meet Jesus on Good Friday in the packed square in front of the church.

People who fear him imagine that he is used by witchdoctors in their black magic and for conjuring curses. However, there is big plaque at one of the shrines near Maximón’s throne where he himself states unequivocally that no one should ever appeal to him to do harm. The Law of Compensation will duly punish anyone who attempts this. 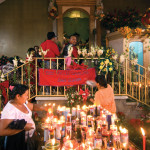 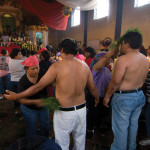 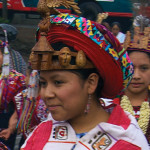 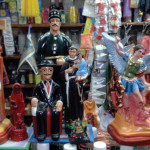 THE MAGICAL & MYSTERIOUS WORLD OF MAXIMÓN
Guatemala is a land where magic is alive and well. Many people in Guatemala, especially evangelical Christians, reject traditional “pagan” practices as being evil. Nevertheless, much of the population believes that practitioners of the magic arts exist and that their powers are real.
In the modern civilized world our “high priests”—scientists and doctors—have convinced us that this kind of thing only exists in myth and legend.

But in rural Guatemala people still freely engage in magical thinking—a kind of thinking where they can believe that literally anything can happen. And this kind of open-ended thinking, which can lead to unfounded fear and anxiety, can also lead to a kind of freedom of thought, which is actually exhilarating. Yes, Guatemala is a land of magic and mystery.

Over the years I have met many Guatemalans who believe in Maximón. In all cases these devotees thought that Maximón was a good being: a friend whom you call on when you are in trouble or when you believe that someone is trying to hurt you. Maximón intercedes on one’s behalf and helps to remove whatever is getting in the way of one’s health or prosperity. I will now recount several personal experiences that I have had with the mysterious world of Maximón:

Some time ago I was renting a room at a rather posh apartment complex in Panajachel. As one might expect, many of the workers were indigenous Maya from the region. Part of the staff were made up of individuals from Panajachel and were Kaqchikel Maya. The rest were from Santiago Atitlán and were from the Tz’utujil tribe. What is unknown to nearly everyone except local residents is that there exists a certain amount of enmity between the two tribes, which can be traced back to the Conquest when the vanquished Kaqchikel were obliged to fight alongside the Spanish as they attempted to subdue the Tz’utujil resistance, which continued to defend their homeland on the south shore of Lake Atitlán.

One of the Tz’utujil workers where I stayed began to take ill. It was a slow process, but as the months passed he became weaker and noticeably thinner. He was taken to the doctors but none was able to detect the cause of his malady. I had known this young man for many years and felt quite concerned about his predicament. He became so weak that he was unable to come to work.

Then one day, with the help of his sisters, he came back to speak with the owners of the apartment complex. He told them that he had had a dream where Maximón appeared and spoke to him. Maximón told him that one of the Kaqchikel men who worked at the apartments was trying to put a curse one him. He was told that if they searched the property, they would find a cache of black-magic items.

The owners, who are North Americans, took the young man seriously and searched the compound. Lo and behold, they did find the voodoo cache, which included a stolen photo of the young fellow along with half-burned black candles, incense and feathers. The stuff was promptly burned, and the owners confronted the suspect, who confessed. The perpetrator’s pay was docked and he was informed that if he continued with such activities, he would be sacked.

Over the next few weeks, the young Tz’utujil man completely recovered. He was absolutely convinced that Maximón had saved his life, and from that day forward he never forgot to take a small offering of food, liquor or cigars to Maximón’s temple in Santiago Atitlán. Of course, I don’t believe any of this; nevertheless, it happened just as I have related.

Some years later, while staying at the same apartment complex, another strange series of events occurred. One evening there was a knock at my door. It was the wife of a prominent hotel owner from across the lake. I had known them for years. She said that her husband was in one of the other apartments and she wanted me to come and say hello to him. When I got to the room I was rather shocked by what I saw: The normally portly and jovial man had turned into a living skeleton. He was so weak that he could not even hold a telephone to his ear without help. I felt very, very bad for the guy.

They had seen all the doctors and even experts in the States and none could find out what was wrong with him. Suddenly, I got a bright idea. I knew a medical researcher in Guatemala City who loved nothing more than a good challenge. I told them that they should go see him. It was a Friday evening; they decided to see the doctor on Monday.

Long before this I had promised one of the Tz’utujil ladies who worked at the apartments that I would take her and her daughter to see the big Maximón temple at San Andrés Itzapa (near Chimaltenango). Her name was Candelaria Matzar and, being a devotee of Maximón, was very enthusiastic about the prospects of making a pilgrimage to Guatemala’s largest Maximón shrine. We determined to go there that very Sunday.

After a nice breakfast along the way at the Katok Restaurant in Tecpán, we proceeded to San Andrés Itzapa. As soon as we got to the temple, Candelaria went to work making prayers and offerings of candles of diverse colors, incense and tobacco. For the next few hours I enjoyed the show as she worked intensely. The atmosphere was welcoming; it felt like a family party.

The place was packed, and thousands of twinkling candles placed upon special tables gave the large hall a magical atmosphere. Women were puffing intently on huge cigars. Shaman were performing “cleansings,” which entail spitting aguardiente (firewater)on the subjects, even in their faces, and then whipping them with bundles of herbs. Mariachi musicians played as a long line of devotees filed up to get a closer look at Maximón who, looking resplendent sitting upon his throne, presided mutely over the entire affair. A man on the stairway leading up to the throne pulled out a liter bottle of Gallo beer, shook it up and showered the entire crowed with its contents to squeals of approval. It was one wild scene.

When my friends had finished with their ceremonies, we drove back to Sololá and Panajachel, making a stop along the way to visit the ancient Mayan citadel of Iximché. As we walked around the ruins I asked Candelaria about the rituals she had performed back at Maximón’s house. She related that she had been saying prayers on behalf of her daughter and specifically that the girl would do well in school. She had also asked Maximón for help to remove the sickness that was plaguing our friend. She said that since medical doctors had been unable to help the fellow, perhaps Maximón could. He is, she said, good with those kinds of things.

Later on that week I was surprised to see the hotel owner’s wife looking jubilant. What happened? I asked. She told me that they had gone to see the doctor I had recommended and, after several days of tests, he had finally detected the cause of the man’s illness and commenced with treatment, predicting a full recovery.

When I told Candelaria the good news, she was also very pleased. She confided that she was absolutely sure that it had been Maximón who had interceded on the man’s behalf. He often works like that, she said.