No visitor to La Antigua—no matter for how short or long a stay— has savored the flavor of the city without a visit to the local mercado, with its stalls of colorful and sometimes unfamiliar fruits and vegetables, all separated by narrow, crowded aisles. It can be an enticing but bewildering experience. If the purpose of the visit is to prepare a meal with your purchases, the confusion increases. Which of the güisquiles—white, green or bristly— is best? How much should you buy? What is a fair price?

Alma Diaz, an Antigüeña, offers to help me navigate the mercado. I eagerly accept her offer, first asking about the story I heard of two friends who met at the mercado and didn’t recognize each other at first. Each was “in disguise” to get the best prices: no makeup, no jewelry and old clothes. Alma agrees that it is a good idea to leave jewelry, cameras and other valuables at home, since crowded areas attract petty thieves. She also advises carrying only a plastic shopping bag and hand purse with small bills and coins.

As for getting the best prices, Alma suggests asking several vendors how much for a particular item, then choose the vendor with the best produce and make your offer based on this information.

As we weave our way through the stalls, we pass booths that offer clothing, from boxer shorts to wedding dresses; plastic piggy banks in every color; suitcases; back packs; in fact, every imaginable item. We finally arrive in the food market. Hurrying past the meat stalls, with hanging sausages, chicken and beef, our olfactory senses get a workout.

Finally, we arrive at Irma’s stall, piled high with as much produce as many small supermarkets. Irma is Alma’s marchanta, her usual go-to vendor. Alma feels that it is important to establish a relationship with a vendor, in order to receive the best produce at the best price. Although Irma is from Sumpango, she is at the main produce market in Guatemala City every morning at 4 a.m., coming back with fresh produce in time for the opening of the Antigua mercado.

Today, Irma has large, green bunches of macuy, bledo and chipilín, which grow naturally near Antigua. These green, leafy vegetables are responsible for the Antigüeños’ nickname panzas verdes, says Alma. When Antigua was evacuated to present-day Guatemala City after the 1773 earthquake, those who stayed behind were said to have panzas verdes (green tummies) because they had only these greens to eat. Another story of the origin of the nickname is that Antigüeños eat so many locally grown avocados that they develop panzas verdes.

Avocados are abundant today, as are red radishes and oyster mushrooms, grown in Tecpán cooperatives. Ichintal, the large tan roots of the güisquil, plentiful from October to April, are piled high in a large, round straw basket. Prices are very low when compared with prices in the United States, and as we buy, Irma takes a few quetzales off her initially quoted prices.

We notice commercially packaged, name-brand corn in this and other stalls and learn that products for export become available in the mercado if the exporter has excess produce.

We move on to another stall, where we buy panela, brown sugar, in a 2½ pound loaf. This sugar has more of a molasses taste than the modern, packaged version. We also buy a pound of tamarindos, long, flat, bean-shaped pods, which we’ll use for a beverage. We move farther back in the market, passing smaller stalls, some selling seasonings such as the ground red achiote, which provides both color and flavor. There are also ajos criollos, tiny bulbs of garlic, which Alma says have a better flavor than the larger variety.

At the very back of the market, we come to a colorful, chaotic scene. Perhaps 100 vendors are seated on the ground surrounded by produce, which they or their families have grown. The riotous color is overwhelming. From little girls to elderly women, all the vendors wear colorful, intricately woven blouses (huipiles) of blues, reds, greens and oranges in all shades and patterns. The sounds too are different. Conversations are in languages other than Spanish—no doubt one of the many Mayan dialects still spoken in Guatemala. Men are loudly hawking hand-carved wooden spoons and other kitchen utensils. Prices are even lower here than in the main section of the mercado.

In this area are also large trucks with their back gates open. They sell produce to some of the vendors. To get the very best prices, Alma suggests coming to the market at four in the afternoon. and buying directly from these produce trucks. 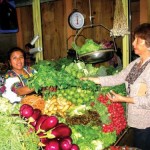 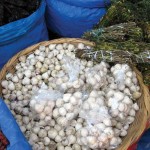 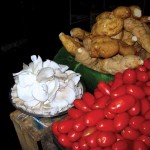 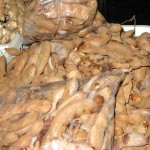 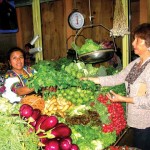 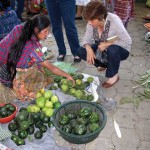 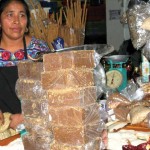 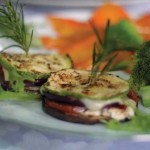 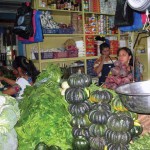