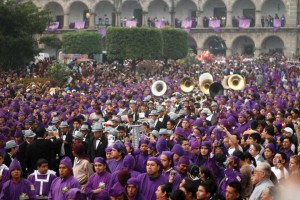 Antigua recently surpassed Seville, Spain as having the largest Easter Week celebration in the world today!

In 1524 the conquerors had barely set foot in Guatemala when they introduced their traditions for Lent and Semana Santa from Seville, Spain. These have evolved over the centuries and Antigua recently surpassed Seville as having the largest celebration in the world today!
Carpet making is everyone’s favorite part of the season. It can be traced back to the seventh century in the Canary Islands, and to 10th-century Barcelona, where they made carpets out of dyed earth. Indeed, many cultures prepare sand paintings and other ephemeral forms of artistic expression for religious and spiritual traditions.
The first carpets in Guatemala —made in the 16th century—were made from pine needles and flowers. Eventually dyed sawdust was introduced and about 15 years ago vegetables and fruits became popular. Corozo—the large pod of a fragrant palm tree found on the Guatemalan south coast—has been popular for some time. Carpet makers are extremely creative in incorporating the most incredible designs using flowers and other local plants. If a procession passes by your house (there are 25 processions during Lent), friends and family will often invite themselves over to make a carpet. You are free to choose your materials and designs (although using your business logo is frowned upon by locals), and people of all ages are on their hands and knees creating carpets. In English, it is considered that the carpets are “destroyed” when the processional carriers walk over them, but in Spanish, it is considered that these are just “walked over” as a gift or offering for Christ and the Virgin Mary.
How did Antigua get to be the largest celebration in the world? This was accomplished mostly through the painstaking efforts of the hermandades. The Spanish brought the religious organizations of cofradías from Spain. The oldest one founded in Guatemala, in 1547, was the Dominican Asociación Penitencial de America. By 1787 there were 1,982 cofradías and 153 hermandades registered in the country. Facing reforms introduced in 1871, many cofradías were changed to hermandades. In colonial times, one would inherit a position in the procession with turns (carrying the anda) passed from generation to generation.
After Antigua was abandoned, processions re-appeared as early as 1808, and turns could be purchased by anyone. Funds are gathered to provide the decorations and to cover expenses necessary to pay for the bands. As anyone may sign up, there has been great competition among the hermandades to get more and more carriers. With an estimated 35,000 carriers for four processions on Good Friday, we clearly see that carriers come from all over the country to participate, as do on- lookers who come from the world over.