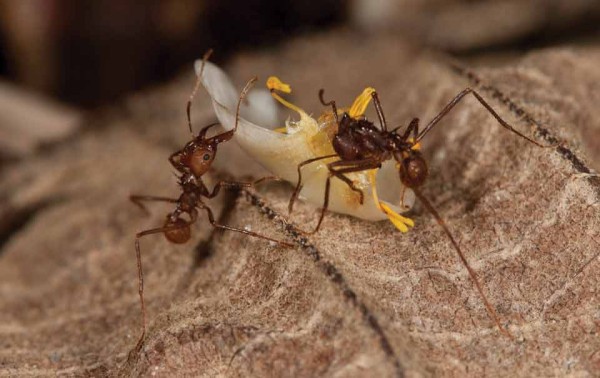 While visiting the Petén, Alta Verapaz or the costa sur, you’ll most likely see leaf-cutting ant trails, which look like miniature highways running through a lawn.

One aspect about leaf-cutting ants that is seldom written about is their propensity to carry flowers (rather than leaves). In the last three years I have found ants harvesting and carrying flowers about 90 percent of the time I have been out in the field studying flora and fauna.

This does not mean 90 percent of them carry flowers; it means that if you go into remote areas, you have a 90 percent chance that at least one of the zompopo trails are occupied by ants carrying flowers.

Sometimes the ants climb high into trees to harvest flowers from vines. I saw this on the property of the Posada Paso Caribe, an hour up the Arroyo Petex Batun from Sayaxche, Petén. But normally the ants harvest flowers that are already on the ground. From my experience it seems that the ants are opportunistic: They cut up and carry off to their nest just about any flower that is convenient.

For example, at the Parque Nacional Tikal, near the aguada next to the visitor’s center, the zompopos were cutting up the complex flowers of Pachira aquatica. They cut every single part of the flower.

The version of the Popol Vuh that we have today comes from the Highland Quiché. But the core aspects of the story of the Hero Twins shooting a mythical bird-monster deity atop a tree goes back to about 200 to 300 years BC in the pre-Mayan stelae of Izapa, lowland Chiapas near the Guatemalan Pacific coastal border. The Lowland preclassic Mayan murals of San Bartolo, Petén, also show chapters of the Popol Vuh.

Although you can find leaf-cutting ants in the Highlands (such as Alta Verapaz, along the road between Cahabón and Senahú), I would not expect to find zompopos in some parts of El Quiché. This is a long way of saying that originally there were many different regional versions of the Popol Vuh. Each regional Mayan language had its own version. Most shared certain chapters, and all had some heritage from pre-Mayan versions such as Izapa.

What is interesting is that in the story of the Popol Vuh the zompopos also cut tail features of the birds. I have heard of these ants being a plague on farms, but will need to see if we can document ants carrying sections of bird feathers. After all, the story of the Popol Vuh does have mythical underworld aspects. My goal is not to say that everything in the myth is direct observation of actual habits of plants and animals. My goal is to find and study all mention of plants and animals in the Popol Vuh, and find out which are naturalistic, and which are mythical.

Guatemala is also a paradise of tropical flowers, and remarkable (and hard-working) insects, which harvest these flowers. So when you have time, consider visiting Guatemala to see the diverse eco-systems throughout the country. I work (as a consultant in advanced digital imaging) in China, Korea and Europe, and reside in St. Louis, Missouri. But I come to Guatemala as often as I can to find and photograph (and experience) the wonders of Mother Nature.

The purpose of this discussion by FLAAR Reports is to share my experiences as a visitor to Guatemala and to learn that some aspects of the Popol Vuh are based on real plants, animals and insects of Mexico, Guatemala, Belize, Honduras and El Salvador.

You can learn more about Mayan culture at www.maya-archaeology.org, as well as our separate websites on ethnobotany and ethnozoology; Google “Maya ethnozoology.” 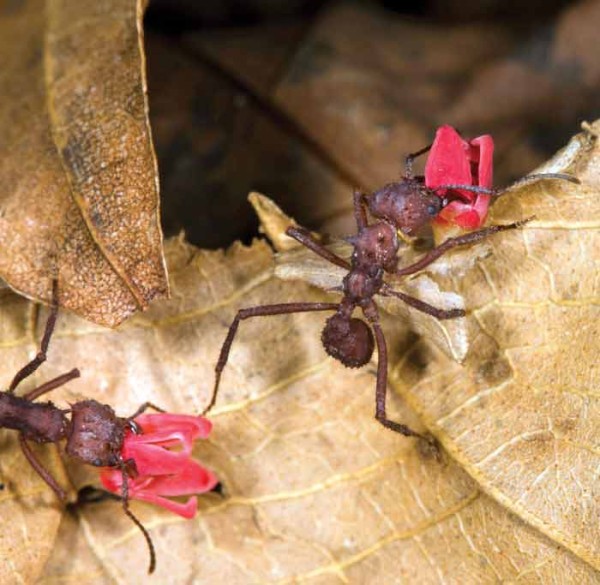