Last But Not Least La Recolección is off the beaten track but worth the extra, dusty walk, being among the most impressive ruins in town.

Religious reformers punctuate history as far back as anyone wants to go. Constantine, Luther, even Henry VIII, the Wesley brothers. The past century knew Billy Sunday and Billy Graham. Antonio Margil de Jesús is hardly a household name, but Jesús María García Añoveros said he left an indelible memory in the Kingdom of Guatemala and called him one of the most celebrated missionaries in America. (Historia General de Guatemala, Vol. III) His legacy lies in the grand ruins of La Recolección in La Antigua Guatemala, on the western edge of 1a calle poniente.

La Recolección is off the beaten track but worth the extra, dusty walk, being one of the most impressive ruins in town. Massive hunks of masonry lie high in the church nave, on a heap of centuries-old rubble, unlike the convent ruins of Santa Clara and Las Capuchinas, cleaned up and planted with gardens; or San Francisco, the Cathedral and La Merced, now rebuilt or restored functioning churches. The word for La Recolección is ‘huge’; it rivaled as the largest religious facility in colonial Santiago de los Caballeros, now La Antigua. Fray Antonio Margil was its first director.

He arrived from Spain at the port of Veracruz, Mexico in 1683 with 24 other Franciscan Recollect evangelists. They dispersed throughout the territory of New Spain to preach the Gospel. News of the traveling evangelists spread, and by the time two of them, one Fray Margil, arrived in Santiago in 1685, they were received enthusiastically by important families of the nobility, who expected the “conversion of a multitude of sinners—of whom there was no scarcity in the city,” wrote Pardo, Castellanos and Muñoz in the Guía de Antigua Guatemala.

The humble Recollects established a home base at the Calvario church while they continued their itinerant missions. “The Franciscan Recollects entered non-conquered regions accompanied by a small group of soldiers, not with a mission of attacking the natives, but to avoid to the extent possible any violent reaction. After the missionaries were seated peacefully, the soldiers withdrew; the missionaries organized the people into groups and evangelized them. The groups became parishes and were entrusted to the secular clergy.” (Añoveros)

The Recollects requested royal permission to establish a missionary training school in Santiago, like one already established in Mexico. As it had before and after, the town council opposed adding another religious order to the 16 in the town, given economic and space limitations. According to Añoveros, in 1687 the Crown itself, concerned with the extent of possessions of the religious orders, had “issued the first of a series of decrees expressly prohibiting the acquisition of new real estate by the convents.” Church entities had become the largest bank and finance company and held the most property. They made loans, guaranteed mortgages and invested new donations, increasingly adding wealth—at a time when the monarchy was relatively impoverished.

Impoverished or not, freedom from the Hapburgs and alliance with the French in 1700 brought new strength to the Spanish monarchy, giving the throne unquestioned divine right and responsibility that overruled civil authority. When royal approval came, the town council pitched right in to help the Recollects build a simple, thatched convent and church in a field just outside town. Within months supporters put up funds, and the cornerstone was laid for a new church as well as the school, called Colegio de Cristo Crucificado. In 1702 Fray Margil returned from his evangelist journeys, crisscrossing back and forth through Guatemala from Chiapas to Costa Rica, to oversee the school.

And maybe none too soon. Although the whole territory was considered evangelized by the 18th century, some missionaries concentrated on revival among Christians. Religious life had deteriorated to decadence. Sixty years earlier Thomas Gage wrote, “Great plenty and wealth hath made the inhabitants as proud and vicious as those of Mexico…fearing neither a volcano nor mountain of water on one side; neither a volcano of fire or mouth of hell on the other side, soaring within and threatening to rain upon them Sodom’s ruin and destruction…” Gage may have overdramatized. But some clergy “showed scandalous public behavior,” and the bishop “made a fortune” taking advantage of priests’ weaknesses by blackmailing them. True, he spent great sums on convents. “But these activities were blemished by his excessive greed.” (Añoveros)

In contrast, the Recollects were characterized by their strict practices. Fray Margil was austere and simple, always going barefoot. He left Santiago in 1706, evangelizing in Mexico and the Texas territory until his death in 1726.
Meanwhile in Guatemala, construction of the monastery continued, and the church and school of the Recollects was inaugurated in May 1717, four months before the hard-hitting earthquake. Repairs were carried out, only to be bashed and broken again in 1751. Reconstruction built a bigger and better church, among the largest in Santiago, and comfortable cloisters to accommodate perhaps 100 Franciscan Recollects; the 35 in 1740 needed help to carryout the mission of the monastery. The two simple Recollects in 1685 would have been amazed at the sheer size of it.

The façade with three entrances looked east to the edge of the plaza of the Dominican church on the northeast corner of town, with properties of San Jerónimo, La Merced, Santa Teresa and Las Capuchinas along the way.
Numbers of clergy declined in the second half of the 18th century, the Recollects being the final monastic order to be established in Santiago. The Escuela de Cristo group received Papal confirmation later, in 1704, but had been founded in 1683. A half-century earlier they had occupied the simple, temporary structures vacated by the Franciscans. They never achieved expected support but quietly carried on their work of evangelization, prayer and meditation. Their church on Calle de los Pasos was completely rebuilt in 1730 by master architect Diego de Porres after he finished La Recolección.

The magnificent walls and columns of La Recolección tumbled in the earthquake of 1773, although the much-photographed 60-foot arch that spanned the sanctuary defied nature for another 200 years before it succumbed to the quake of 1976. The Casa of the Recolectos, to the south of the monastery and no longer open to the public, was restored in the 1980s by the Council for the Protection of La Antigua Guatemala and the Organization of American States.

Much of the great ruins of La Recolección remain where they fell, but not all that remained has been left to rest in peace. To nature’s force was added unconscionable pillage. Materials were scavenged and the cloisters used for sports events, fairs and a race track. The sacristy became a soap factory and the dining hall a stable and wagon shed. The original kitchen can still be seen, when the office now occupying it is open. Almost nothing is left of the second floor.

In the early 1900s a swimming pool was dug in the main cloister. The vaulted, columned cloister corridors—gone. Stairways—gone. Domes —gone.

Silent spaces and vestiges of the vaulted, sculpted ceiling of the long dining hall taunt the imagination. Who were these Recollects? Despite the lamentable moral state of the Church, the egoism, vice of drink and cruel treatment of natives, “The Franciscan Recollects offered a more optimistic vision of Guatemalan society,” wrote Añoveros. “Dozens of missionaries went from the school to found missions in Nicaragua and Costa Rica,” and Fray Antonio Margil de Jesús has been credited with thousands of converts.

While the Recollects preached in Latin America, the Salem witch trials were held in Massachusetts in 1692. Older folk hoped the First Great Awakening in the 1730s would effect young folks’ morality as well as stir religious revival in the American colonies. Isaac Newton was buried in Westminster Abbey in 1727. 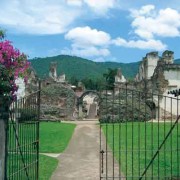 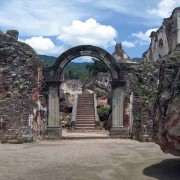 One of the three façade entrances to La Recoleccion Church, off the western edge of the colonial town (photo: Jack Houston) 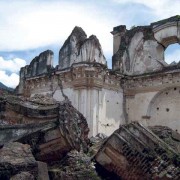 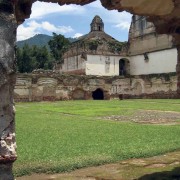 The main cloister, robbed long ago of its columns and corridors, site of a swimming pool in the early 1900s (photo: Jack Houston) 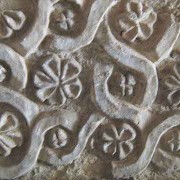 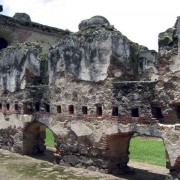