It may be difficult to find friends and family outside of Guatemala who know much about the Mayan calendar. But here, the calendar—and especially the significance of its end date in 2012—are regular topics of conversation, as Guatemala’s ancient history was likely a part of the original intrigue for many of us. So strong is the interest in the Mayan calendar that more than 1,200 people—including international ambassadors and consuls, 52 Maya spiritual guides and representatives from over a dozen museums and universities of Guatemala—converged at Casa Santo Domingo on Aug. 23 for the conference La Profecía Maya 2012. Far from the fringe, conference participants represented a cross-section of people from a global movement for change based on indigenous wisdom.

The conference’s aim, underscored by archaeologist Mary Lou Ridinger, was to explore the link between the Mayan ball game, the creation myth found in the Popol Vuh, carvings from the site of Izapa and the galactic alignment set to occur on December 21st, 2012, the end of the 5,125-year Mayan Long Count calendar.

Author John Major Jenkins, who headlined the list of speakers, is part of a community with an emerging interest in the Mayan’s cyclical, holistic method of keeping time—a method that illuminates the pairing of life on earth and life in the cosmos.

Today, our everyday perceptions are based on our use of the inherited Gregorian calendar, and so placing ourselves within the scope of Mayan time requires a dose of radical thinking—the same kind of radical thinking that allowed the ancient populations of Mesoamerica to undergo a paradigm shift that would come to define an entire civilization.

In fact, it took hundreds of years for the pre-Maya at Izapa to shift their beliefs about the cosmos and to gather astronomical calculations that would culminate in the creation of the Long Count calendar. Twenty years of research has led Jenkins to find that ancient Mayan astronomy, mythology, symbolism, prophecy and spirituality evolved side by side to form a profound vision of the future. That future is our present, the end of the Long Count calendar. This time, our time, was codified within the very creation myth of the Maya at Izapa, says Jenkins.

Izapa is a small ceremonial site in southwestern Chiapas, Mexico, where Jenkins has spent years studying the well-intact thrones, stelae and ball court. Here, dedicated sky watchers and shaman-astronomers collected data, based on observation, that led to the discovery of the precession of the equinoxes—the phenomenon of our planet’s wobble on its axis. The ancient Izapans predicted a precessional cycle to be 25,626 years, and modern astronomers, using advanced computer technology, agree.

The discovery of the Earth’s wobble, and its observable result in the sky, caused ancient astronomers to completely re-think their relationship to the cosmos, which previously revolved around a Polar God, represented by the Pole star. The new paradigm recognized the center of the universe to be a dark rift in the center of the Milky Way galaxy.

To shift their belief regarding who or what was the very center of the universe required an unparalleled degree of open-mindedness. But once the Izapans had made their case, it wasn’t long until word spread throughout the Mayan world, and the new calendar, based on a future astronomical event became the center of Maya life and spirituality. The event was set to take place on the day we call December 21, 2012.

To further explain the significance of the calendar end-date, the conference welcomed independent researcher Georgeann Johnson. Johnson offered a profound look at the Mayan ball game as a symbol for the astronomical alignment of 2012. According to Ms. Johnson, the Mayan ball court, such as the one found at Izapa, is a structural representation of the Milky Way. The game is played with a rubber or stone ball, and when this ball (symbolic of the sun) passes through the goal ring, the game is won.

The game, an integral part of Maya life, referred to none other than the events of December 21, 2012 when the solstice sun will rise, and pass through the Milky Way’s central dark rift. Ms. Johnson went on to note that the game itself is also a metaphor for the transformation of human consciousness that begins with the next World Age. “The story of the Maya ball game is a story of being on a team,” she said. “Each of us has a responsibility to show up at the global round table of the common good.”

Maya spiritual guide Aq’ab’al (Aurelio Sajvin) shared with participants his knowledge of the Mayan concept of time. He reminded us that the essence of understanding Mayan time is a spiritual wellness on an individual level. He pointed out that in today’s world, we frequently find ourselves “bumping into each other, looking for a flat road to where we are going” and that in order to truly understand Mayan time, we must first become “energetically well.”

The implication that the collective energy is somehow unwell or diseased is a widespread concern of those involved in the movement to reclaim indigenous wisdom. Perhaps, too, the wisdom encoded in the Mayan calendar is threatened by time itself, by what Aq’ab’al called the “flat road,” or linear time’s tendency to have us look at life on Earth as a series of events, some destructive and others triumphant, that simply unfold before us indefinitely. This straight road to the future strips us of our imaginative power.

I don’t believe that our brains have devolved or that a way of life informed by indigenous wisdom is out of reach. I do think that, like the Izapans, we have the ability to shatter long-held belief systems in order to make room for new ones. It’s equally important to remember that the ancient Maya, who lacked artificial technologies to collect and interpret the natural world, were armed with a type of human intuition that is extremely difficult for us to imagine. And during these few short years approaching 2012, we will find out if this lack of imagination will lead us away from the wisdom left by the Maya—that every possibility of human experience is a story that has already been told in by the cosmos. 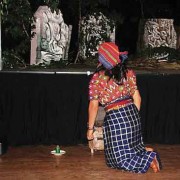 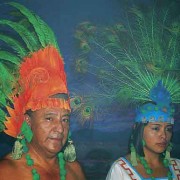 Members of Ballet Folklórico, whose performance for the event was donated by INGUAT (photo: Georgeann Johnson) 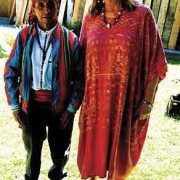 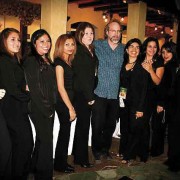 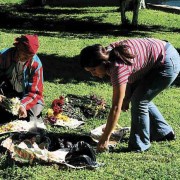 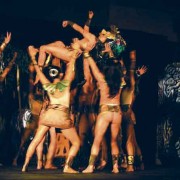 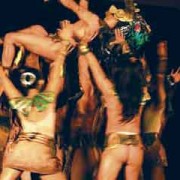 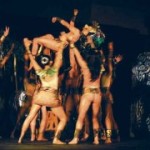