La Camioneta, The journey of one American school bus 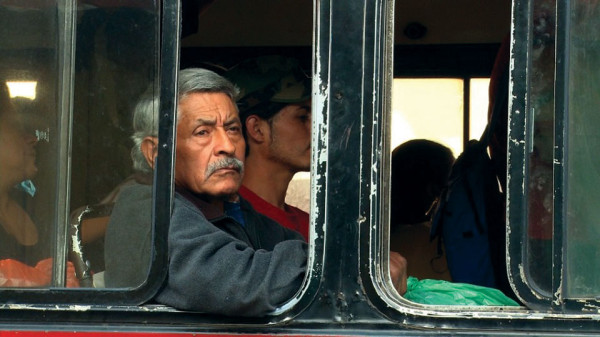 Anyone living in or visiting Guatemala knows that the majority of camionetas are converted U.S. school buses. While traveling through Guatemala as part of his Latin American studies, filmmaker Mark Kendall became intrigued with the transformation process after having a conversation with a camioneta driver. It was in that moment he became inspired to share the story of the camioneta. He persuaded his professor to let him make a documentary as his thesis to complete his degree in Latin American studies.

“La Camioneta” is an emotional documentary that follows the driver of a school bus from an auction in the United States to the streets of Guatemala, where he now provides public transportation. Surprisingly, as we learn in the opening of the film at a bus auction just outside of Nashville, the buses are not nearly as old as one would imagine. Typically they are 8-10 years old or the speedometer has reached 150,000 miles. Is this a sign of U.S. prosperity and wastefulness? However wasteful the practice, the buses bring a small form of prosperity to many families here in Guatemala. The young man who purchased the bus that is featured in the documentary has dreamed of having his own bus since age 13. Most of the buses from the auction (selling for a mere $2,000 or less) then find their way to Central America or Africa.

Kendall’s documentary follows the journey of one man who every 15 days drives a newly purchased bus from the auction in the U.S. through the dangers of Mexico to Guatemala. Once the bus arrives it is repaired, repainted and transformed into a brightly-colored camioneta.

After its successful commercial run in more than 40 U.S. cities, this critically acclaimed and award-winning documentary has, at last, found its way home. It is here in Guatemala that the film will be truly understood and praised for the humanity it shares in nearly every frame of the film. It is a film that belongs to the Guatemalan people, as it is their story. The story lives in the heart of every family who drives, refurbishes, travels and experiences camionetas on a daily basis.

I was pleased to learn that Kendall, the filmmaker, plans to make the DVD version of the movie widely available in Guatemala, as many Guatemalans can’t afford to attend theaters or buy full-priced DVDs. “We’re going to get it out on the streets, make it as accessible to people as possible,” he said.

I must admit I have found it a bit daunting writing about this film here in Guatemala, where we live among the camionetas, and where virtually everyone understands the role of the caminoeta in the culture—as opposed to viewing it at a screening in New York. It is my personal view that here in Guatemala, the film stirs emotions that a critic in New York City or elsewhere could possibly never truly understand. However, good film reviews are coveted by filmmakers and Kendall has received critical acclaim from several influential news outlets in the U.S. Stephen Holden of the New York Times in his review wrote, “A story of resilience, regeneration and artistic imagination.” Emma Bernstein from Indiewire wrote, “An insightful documentary and a poignant allegory.”

After I read many positive reviews, one word that the New York Times used stuck out: resilience.

The resilience—of the Guatemalan bus drivers and the families and other passengers who ride the buses daily—is astonishing. Most people living here or visiting Guatemala find the camioneta the only means of transportation, it provides a means of transportation at a cost that nearly anyone can afford. The bus drivers have families to feed and they must endure the dangers of the road, including, as we all are aware, gangs who extort money from them as they make their way through treacherous routes. These drivers, in the truest definition, are resilient as are their passengers.

When I took on this assignment to write about this extraordinary documentary I was in search of personal stories of journeys and adventures on camionetas. The stories are many and not all negative, as one would imagine. I have spoken with friends who use them to explore villages in Guatemala that the typical tourist would never experience. Most important is, the camioneta provides a means of inexpensive transportation.

One camioneta story told by a friend, who is a wonderful storyteller and has lived here in Guatemala since the 1960s, touched me, as I am certain it will you.

I asked her if, in her early years living here, she had any sense of fear or danger as she traveled on camionetas through the countryside where she was then living. The only fear she could remember was once being on an overcrowded bus on a very hot day.

People around her were becoming sick as they were overwhelmed with the heat. In those days, if it was too hot, the drivers would allow passengers to sit on top of the bus to overcome the heat. The only fear was not ducking fast enough to avoid a tree branch and being knocked off of the bus. My friend also shared stories of Guatemala before the civil war, when the country was essentially free from fear. What a paradise it must have been.

Mark Kendall, too, is a wonderful storyteller and his film “La Camioneta” should be seen by everyone who lives in this extraordinary land of Guatemala. It is heartwarming, truthful and will make you think differently every time you pass a camioneta.

I remember as a boy waiting on the corner near our home for the big yellow school bus to drive me to school, always fearful of bullies who awaited me on the bus. Looking back, it was so insignificant.